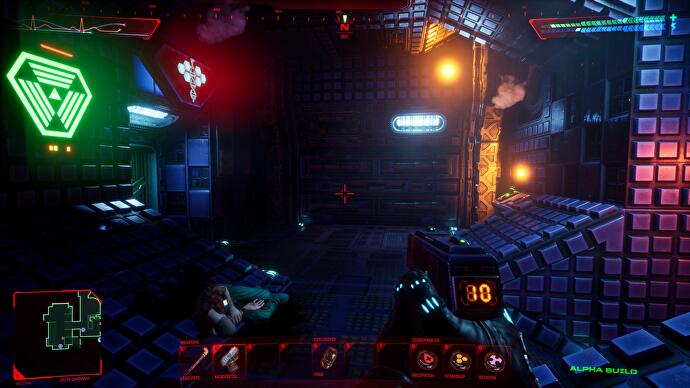 There’s one performance you have to say goodbye to when you play this new edition: it’s great! But it’s not a lavish production of the Prey type, which is being traded as the spiritual successor to the groundbreaking Cyberspace series. No wonder, in contrast to Arkane’s major order, just over 20 developers worked on the remake – sometimes more, sometimes less. Nightdive (Quake, Turok, Blade Runner) is not a big budget studio. It fetches classics from the basement in order to (mostly) painlessly experience them on today’s computers and consoles with varying degrees of effort.

Nevertheless, the System Shock remake plays in a slightly different league because not only the old code has been revised and the associated assets have been pampered. Rather, like Bluepoint Games, Nightdive technically started from scratch with Shadow of the Colossus. The developers have also made changes to the level design to suit modern habits, as well as adding a surprise here and there. The ability to crawl out of the infirmary, for example, is new and a clever addition in that it adds an additional path to the gameplay possibilities, rewarding the ingenuity that the series is known for among other things.

But of course: The temperature at which books catch fire still opens the first locked door today. In general, judging by the gamescom demo, which is an expanded version of the version currently available for Kickstarter backers, there are only minor changes. Basically, every meter of the Citadel space station is immediately recognizable, with the team around Nightdive Managing Director and Executive Director Stephen Kick setting up extremely colorful backdrops and bringing them to life with lots of light. This is also due to the original, in which each floor stands out from the other levels in a distinctive color way. Kick wanted to capture that while also pushing the limits of the Unreal Engine, which is why the new-old System Shock has that dazzling look that I honestly find edible enough to eat.

It’s not that the new edition is too far from a so-called triple-A title. And indeed, there were even plans to produce the remake as such. That’s right: That was the time when the developers’ plans strayed quite far from the original and they wanted to reinvent System Shock. As Kick tells me in a conversation after playing the demo, he presented the original project to various publishers, who none of them showed any interest, however, because single-player games were considered a dying breed at the time.

Only one publisher was interested: Telltale Games, who even considered a prequel in the vein of typical Telltale adventures. The deal seemed to be sealed – until the software house “suddenly” ran out of money and almost all employees were laid off. With that, the last donor was off the table, with the help of which the Kickstarter project could have been made into a much larger undertaking.

And according to Kick, maybe that was for the best, because his studio wouldn’t have had the capacity to whip up a triple-A title at the time. The fact that some loud Kickstarter supporters expressed their displeasure with the planned changes was the icing on the cake: the project was reset to zero and restarted. Incidentally, it wasn’t in development for too long, because according to Kick, four years is quite normal for a project of this size, which he calls Double-A. Knowing that it existed from the start only makes time seem longer.

And the classification double instead of triple A, which fits. The action lacks the power of more complex productions, especially in the initial close combat, while the playable intro, in which you are arrested as a hacker and flown to Citadel Station by Edward Diego, lacks the liveliness that you know from complex film scenes. What I miss most is the snappy piece of music that started the adventure in ’94 and that is still one of the best themes on an electro soundtrack to this day.

The fact that the introduction can now be played at all is of course a successful innovation. The inventory, together with the much more accessible news and other functions, is also a sensible step forward. And in general I’ve always had a good feeling exploring, shooting and hitting on Citadel. Input fields for hacking circuits and the individual keys of the door codes can also be clicked directly without first activating a corresponding mode. However, as a huge fan of the original and someone who put a significant amount of money into Kickstarter, I’m looking forward to this reboot even more after playing it than I already was!

Everything is there that the classic is known for. Large parts of the space station can be freely explored once you have access to the respective floor. SHODAN’s cameras watch you every step of the way and at the beginning you choose the level of difficulty by determining the level of difficulty of the puzzles, combat, cyberspace and whether there is a five-hour time limit in each of three stages.

I ask Kick if Kick is satisfied with the result after the quite long development time for all versions, and he says that it goes far beyond what he had in mind at the start of the Kickstarter campaign. And indeed: according to my brief impression, the new edition is not only a pleasingly true to the original, but also a pleasantly modern System Shock, which should bring the cyberpunk classic closer to both old and new fans.