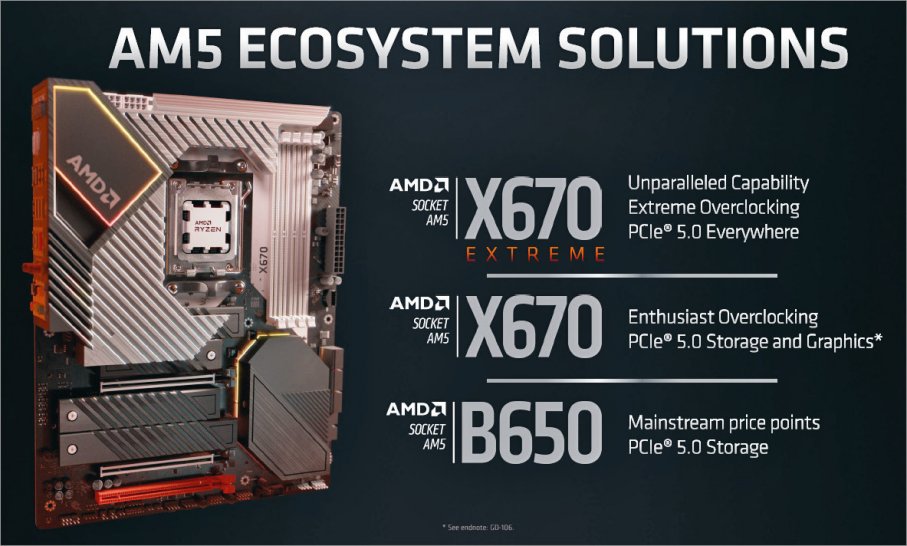 08/29/2022 at 2:41 p.m
from Maximilian Hohm –
After a leaker showed slides from an AMD presentation, it seems to be confirmed that there is a fourth chipset for the new CPUs with the B650E. Like the X670E, this should support new graphics cards and SSDs with PCI-E 5.0 at the same time, instead of users having to choose one of the two. Read more about this below.

While the AM4 platform was extensive in terms of the chipsets present, the classification of the chipsets themselves was relatively straightforward. There were the entry-level models in the form of the A320 and later the A520, above that a middle class in the form of the B350/B450 and B550, and the high-end chipsets X370/X470 and X570. While there were motherboards with B550 chipsets that were higher quality than some models with X570 chipsets, the hierarchy was clear and each chipset could be justified.

With Zen 4, that seems to be changing. So far it is known that there will definitely be a B650 chipset and above it the X670 and X670E. X670E has the unique selling point that both a PCI-E 5.0 graphics card and such an NVMe SSD can be installed. Earlier rumors already spoke of the B650E, a chipset that is also said to support both a graphics card and an NVMe SSD based on the latest PCI-E 5.0 standard. Compared to the X670(E), however, the B650E, like the B650, should only be based on a single Promontary 21 chipset.

This reduces the number of lanes, which reduces the purpose of the chipset, since it is intended to support less fast expansion cards and SSDs than the X670. An explanation of the exact implementation, the area of ​​application and a possible price advantage could already be given today when AMD publishes the first official details on the Ryzen 7000 platform and possibly already presents the entire AM5 socket including chipsets. With B650(E), however, the release of the new processors is not expected directly, but only with some delay. The chipset still has the potential to cannibalize the X670 in particular, which is supposed to offer more lanes but cannot combine a graphics card and SSD with PCI-E 5.0.

Garmin Philip
See also  The Last of Us: Firefly Edition could be coming to Europe