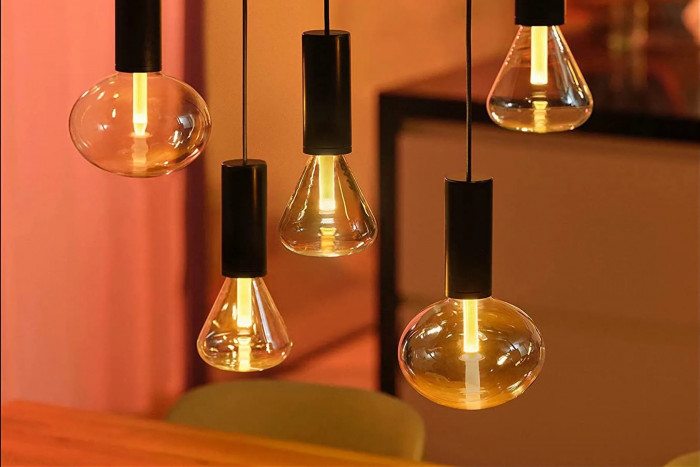 08/29/2022 at 12:41 p.m
from Claus Ludewig –
Three dimmable bulbs with a glass body have been spotted on Amazon. All three lights come from Philips Hue and are suitable for the smart home.

The special thing about smart lamps is that they can be controlled via Bluetooth or WLAN. For example, you can use an Amazon Echo and the Alexa app to create routines that turn on the light at a certain time or with a voice command. Probably the most famous representative of connected lamps is the Philips Hue brand from Signify. Now advance on Amazon.de released the new Lightguide series. These are dimmable bulbs with a glass body for the E27 base.

According to the listing on Amazon, prices should start at 75 euros. According to the Hueblog.com website, there are three versions. With a height of eight centimeters and a width of five centimetres, these are large glass bodies that also function as a lampshade. The Hue lamps are said to offer up to 500 lumens of light and can be controlled via Bluetooth or Zigbee. The Philips Hue Lightguide may be officially presented at IFA 2022.

From autumn 2022, all previously released and all new Philips Hue products will support the cross-brand IoT standard Matter. The Philips Hue Bridge will receive a firmware update for this. In June, the Dutch company presented a new hall lamp and a smaller table lamp with a wooden base. Within the apartment you can configure when the sunrise should take place, how long the effect lasts and how bright the lamp should shine.

Also worth reading: Philips Hue: Even more customization, Hue Go 2 for on the go

Collection of the new light guides from Philips Hue: