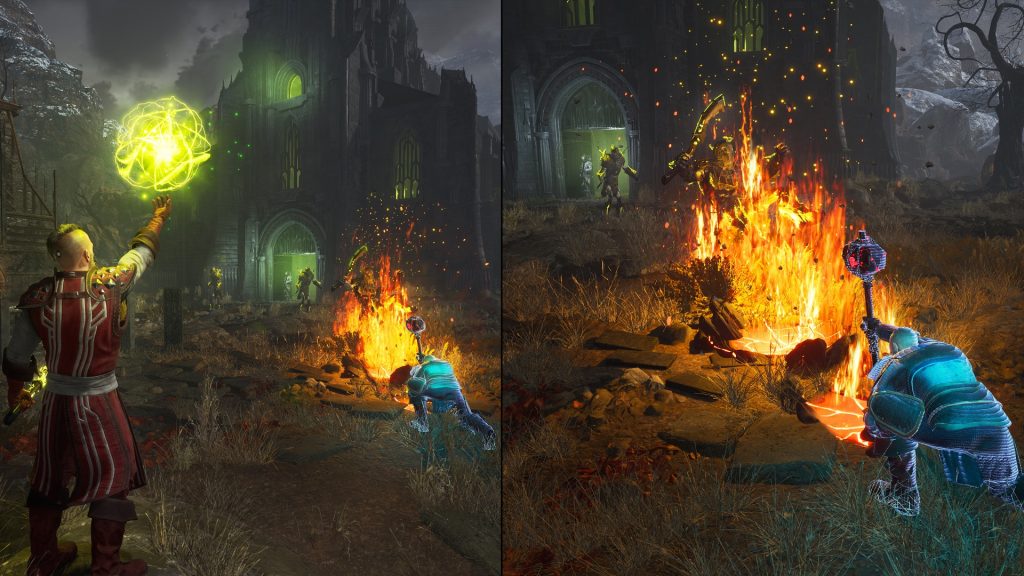 The action RPG The Last Oricru (PS5, Xbox Series, PC) will be released on October 13, 2022. The developers revealed this at gamescom. Our author Mark Sellner was able to spend almost an hour in the title there and sees it as a real insider tip for co-op.

What kind of game is this? The Last Oricru is a sci-fi medieval game, which sounds contradictory at first glance. As the hero “Silver” you can control the fortunes of an interplanetary war in the approximately 15 to 20 hour long campaign. This is played out between two opposing factions.

But instead of fighting with spaceships and big laser guns, you fight with swords, fireballs and axes in The Last Oricru. The action also takes place on a partially developed planet that is isolated from the rest of space and often has a rather medieval feel.

With this mixture of sci-fi and the Middle Ages, The Last Oricru creates a very unique atmosphere that would at most be comparable to the Elex series by the German studio Piranha Bytes. And that’s not just coincidence.

Because the developers tell us at gamescom in a play date that The Last Oricru takes the combat system of a Soulslike and wants to throw it into the world of a Gothic or Risen. So the game puts a lot of emphasis on harsh dialogue and far-reaching decisions.

The developers also showed a new trailer at gamescom:

Why is this exciting? Aside from the unusual setting, The Last Oricru also offers some things in terms of gameplay that you can look forward to and picks up both single-player and co-op fans. You can play through the entire campaign of the action RPG alone, but even better with two people.

Incidentally, this works both online and in split-screen, even on the PC. The second player joins the existing save of the host and can play along, but cannot make any progress or make any decisions.

But it is also adapted to the level of the host, so that none of the players should be too strong or too weak. Gambling together is a lot of fun when you fight together. Because that’s when The Last Oricru shows why it’s so cool for co-op fans.

The co-op battles are the highlight of The Last Oricru

What makes the fights good? In a test session at gamescom, we were able to try out a level about halfway through the game together with the developers. We spent about an hour playing The Last Oricru on PC in split-screen co-op.

The fights in co-op stand out as a highlight. Although the game was originally designed as a single player experience, there are many cool moves that you can simply only pull off in co-op with a fellow player.

For example, if you hurl a large fireball at your opponents, that’s cool and does damage. But if you throw this fireball at your ally, who will reflect it with his shield at the right time and thus hit the opponent, this is not only much cooler, but also does even more damage.

In another fight, the other player directs a healing ray at me. He could also shoot it directly at the opponent, but this would not deal much damage. The beam then connects both players and permanently heals the hit one. Even better, enemies hit by this beam take a beating too.

These are all mechanics that can make The Last Oricru a feast for co-op fans. By the way, since there are no AI companions, these cool maneuvers are completely eliminated in single player.

The whole concept works better in co-op: But it’s not just the fights that are more fun in co-op. The whole game with all its decisions just works better together. Because The Last Oricru has built a lot of different paths into his game.

According to the developers, in order to see all possible outcomes of the story, you have to play through the game at least 4x, but more often because some things are very hidden. But if you’re like our author Mark Sellner and generally only play through games a second time, then co-op is just the thing for you.

Because you can just jump into each game and take a short trip there and see how the game world has changed because the host of the game made a different choice than you.

This makes it possible to get at least a brief glimpse of various game processes without having to play the entire game again. And you can even help your friends, which is a practical gimmick.

Many choices and a hidden path

Where does the replay value come from? As the developers tell us about their game, you can clearly see that they take pride in the many different choices in The Last Oricru. And these shouldn’t just be there, they should actually weigh heavily.

Basically, you collect sympathy points for one of the two warring parties through almost every decision in the game. So you can switch sides more often and don’t have to decide for one of them immediately. However, many missions change widely depending on which side you’re doing them for.

In the mission that we could play at gamescom, the first thing we had to do was attack a castle. Hardly found a way in, our leader dies fighting the enemy captain. Skill and insidiousness are required to emerge alive and victorious from the situation.

When that was done, we play the same mission again. Only this time we made a different choice in the previous quest. Suddenly we are on the side of the defenders in open battle and even fighting the leader ourselves, whom before we could only watch die.

Only here we can even choose whether we kill the leader or let him go. The developers promise us that this decision will also have an impact on the next missions. This creates a large network of various paths, all of which somehow have weight. This is fun and provides a tremendous attraction to be able to see everything.

The hidden path: We don’t know much about him yet. However, the developers did let us know that there is a way to beat The Last Oricru without leading either side to victory. For this you have to make very specific decisions and not deviate from them anymore.

Nobody wanted to tell us exactly what that looks like, but it also makes you want to play through The Last Oricru more than once.

Will the game be a success? It’s still difficult to estimate at the moment. The Double-A production was particularly noticeable in the playable demo in the technical aspects of The last Oricru. The version that we were able to play still jerked in a few places and the controls sometimes reacted slowly, but otherwise the game ran smoothly.

However, the developers still have until October 13 to take care of such small things. If they can do that, The Last Oricru is definitely an action RPG waiting, which has the potential to become an insider tip highlight and definitely doesn’t have to hide.