Rings of Power: This is what happens in the season premiere

Rarely have fans waited for a series premiere with such conflicting feelings as they did for Lord of the Rings: Rings of Power. Now the cat is out of the bag, in the form of two episodes that Amazon made available to its Prime customers on September 1, 2022. We have looked at them, tell what happened in them and draw a first interim conclusion.

Welcome to the Second Age

The first two episodes of Rings of Power spend a lot of time introducing viewers to the world of the Second Age and the version of Middle-earth that Amazon created. So there isn’t much action, but an overview of the status quo. It is as follows:

Rings of Power: Galadriel is looking for allies.

Centuries after defeating Middle-earth’s arch-villain, Morgoth, the Elven people yearn for peace. Only Galadriel is obsessed with catching Sauron, her brother’s killer, and pursues him to the ends of the earth. This does not please Elf King Gil-galad at all, nor does Galadriel’s close friend Elrond, who worries that the Elf will be consumed by her quest. Gil-galad decides to officially end the war against Morgoth’s minions and send all warriors to the west where they can find everlasting peace.

Galadriel is also there, but she jumps out of the boat at the last minute to continue her search for Sauron. Meanwhile, Elrond makes the acquaintance of the elven smith Celebrimbor, who wants to build a forge in order to create things in it that are supposed to outshine even the legendary Silmaril. For that he needs help. Elrond proposes an alliance with the dwarves – but they are difficult people, which is also Elrond’s fault.

LotR: The Rings of Power: How much did season 1 cost to produce?

Rings of Power is so expensive that Game of Thrones looks like Peanuts: That’s how expensive the first season of the LotR series is.

Heroes of Middle-earth: Is Gil-galad really the kickass king I think he is?

Gil-galad was the last High King of the Elves and features in Lord of the Rings: Rings of Power. Is this guy really as cool as I once thought he was?

Another Elf who has trouble believing in eternal peace is Arondir, who watches over the humans whose ancestors have sided with Morgoth. Not only has he fallen in love with a human healer named Bronwyn, but on the day he returns to the Elven kingdom he discovers that evil may not be defeated after all. Bronwyn’s home village has been destroyed and cows and crops are becoming ill. During his research, Arondir makes a startling discovery. Because evil doesn’t seem to have been banished from Middle-earth yet. 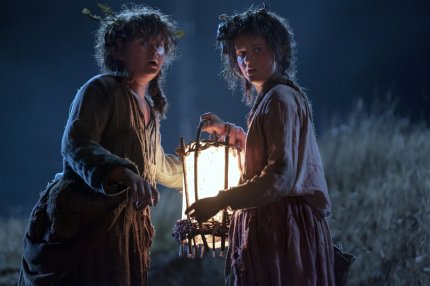 Rings of Power: Nori (right) and her friend Poppy make an eerie discovery.

And then there’s the hairy-foot clan, protohobbits, who actually lead a quiet life independent of the problems of the “great races”. Only young Nori would like to know what lies beyond the borders of her homeland. As Galadriel jumps off the boat to get back to Middle-earth and Elf-King Gil-galad picks up a leaf riddled with black veins, a red comet crashes across the sky and lands near the hairy feet. Nori and her friend Poppy discover that a mysterious man is at the center of the impact and decide to take him to their settlement.

See also  Sonic is the Elden Ring PVP king, and only one thing can stop him

After two episodes of Rings of Power, there’s not too much to say about how the show will end up. But what is clear: the soundtrack is really good, as are the scenes. The actors all fit their roles very well. For example, Morfydd Clark as a Galadriel, who already has the intense gaze of her older version played by Cate Blanchett, but still has a lot to process. Markella also cuts a fine figure

Rings of Power: The Elves about to arrive in the west.

Kavenagh as Nori, a character created by the series creators for Rings of Power. As a curious not-yet-halfling, she takes on the role of Bilbo and Frodo Baggins from the Lord of the Rings and Hobbit films.

Tolkien purists are likely to be most bothered by the story, which can be guessed after two episodes. Amazon has taken some liberties with the Middle-earth canon, so don’t expect a 1:1 translation of the Second Age storyline.

However, Tolkien’s central themes, such as the struggle of the sincere good against the seductive evil and the overcoming of mutual differences, are still present. If you get involved with this variant of Middle-earth, you will be well entertained. It will be particularly interesting to see how well the own ideas of Rings of Power fit together with the story that JRR Tolkien devised for his Second Age. It is not yet possible to assess whether the combination will work as in the first episodes. Another tip: As good as the series looks, it should be watched on as big a screen as possible.