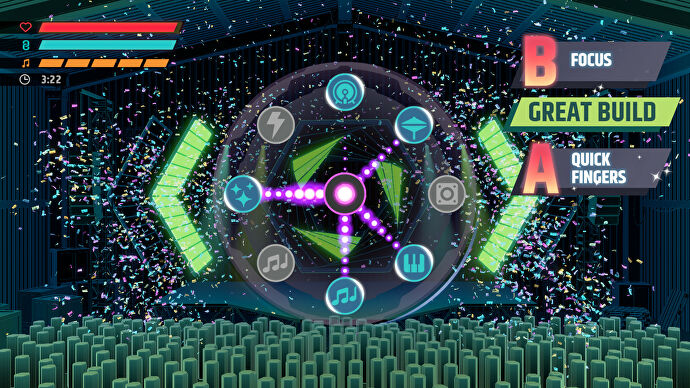 First impressions can be interesting. I didn’t know what to expect when I met David Ventura at the Backbeat booth, after a long opening day of the weekend-long Japanese indie gaming event BitSummit. I knew of his work – now the CEO of his self-founded studio Ichigoichie with developers based both in Japan and Sweden, Ventura has had his hands in a number of highly-influential rhythm games over the course of his career. This includes work on Gitaroo Man and Elite Beat Agents during his time in Japan at iNiS, having worked at the studio for a decade before moving to Sweden to work outside of games on educational music software. In 2018 he returned to games by founding Ichigoichie (stylized as 151A). Their first game, Hexagroove, blended strategy, rhythm and educational tools for a game that captured the building blocks of being a DJ.

Ventura was at BitSummit to showcase the successor to this game, Backbeat. It’s a bit of a departure from much of his past work, acting more like a puzzle game with a musical soul, albeit one where the act of creating and playing music together is imbued into every solution. As the crowd began to leave the bustling convention hall for the day, I went to the booth for one last demo, and the chance to speak to the person behind it all… who was sat at his demo kiosk playing the keytar.

Like I said, first impressions can be interesting. That said, it was rather fitting considering the game we were here to discuss. After all, Backbeat is a game about a few passionate people coming together to make music, wrapped in a pleasing visual style that evokes the nostalgia of the 90s. Our backdrop is 1990s American suburbs, blockbuster videos and shopping malls, with music inspired by genres of the era. Each character plays a different instrument befitting the music, which ages how they move. Multiple solutions to puzzles, where movement determines the sound being played, transforms those solutions into music. Coupled with story choices and special moves on your journey to the stage, it’s a concept ripe with potential.

See also  Microsoft: Gaming is for everyone and everywhere says Phil Spencer

Still, as something quite new for the developer, I can’t deny I wasn’t curious what the inspirations were behind Backbeat, and the journey to get to this point. So, we started at the beginning. The very beginning. “When I was young, for whatever reason, music really resonated with me,” Ventura said, as we spoke about his initial passions for music and rhythm games. At first, this love of music was as far as it went, with no formal training or path to becoming a pro musician. In the end, though, blending music and games was perhaps the logical endgame for this love.

“If the gameplay is not driven by the player’s actions, it’s a terrible rhythm game.”

“My little brother and I, we used to have games where we’d sit in the backseat of the car,” he went on. “One of us would hum a melody from a Nintendo game while the other one guessed which game it was, and it was always game music. We enjoyed playing Nintendo games a lot as kids, so when I got into college, I kind of wanted to start dabbling in that and I got some direction to go into technology. But I wanted to do artsy stuff, too. When I finally got around to starting in games in Japan, I worked at iNiS. And that was their forte, it was a group of musicians that had founded a game company, and that’s something that I’ve carried with me throughout my entire career.”

At iNiS, they worked on the PSP version of Gitaroo Man, Elite Beat Agents and Lips while refining their skills with both games and music. “To make a good game, you had to understand what’s important about music, you had to know when you were on the beat, off the beat, what the backbeat was and whether things were flowing, right? If the animation wasn’t synced with the music, it’s a terrible music game,” Ventura explained. “If the gameplay is not driven by the player’s actions, it’s a terrible rhythm game. Those are lessons that I had drilled into my head from the director, and that pushed me to want to learn more about music and to create my own.”

It was a fulfilling but difficult decade in games, having worked on over a dozen titles in that time. Ventura left iNiS and moved to Sweden to work on music software away from the industry, in part to transport lessons on getting music into useful tools, but also to do something away from the toil and grind of it all. Jumping from this back into games was inevitable to him, but still far from an easy task.

“I told myself when I moved away from Japan, I gave myself a max of five years before I wouldn’t be able to resist being away from games,” Ventura admitted. “Even though I was a little burnt out at the time, I knew it would come back to me in the end. I wanted to get back to the really small kind of thing that’s very pure and simple and passionate and resonates with people. And the only way you can do that is if you’re an indie.”

Ichigoichie was founded by both Ventura and a colleague who worked with him at Swedish music company Propellerhead during his break from games. The move to Europe was a result of searching for something new, having worked and lived in the US and Japan in the past. The studio was founded with the intent to bring together ideals of work and talents from both regions. “I want that Japanese mindset of every moment is precious, that kind of ‘cherry blossom in the wind’ kind of thinking,” Ventura stated. “At the same time, I wanted the Swedish mentality, like, don’t overdo it. There’s a Swedish word, lagom, which means just the right amount. Not too much, not too little. Lagom is like Ganbaru [in Japanese]it’s one of those words where it’s so vague but it makes sense.”

The first game made by Ventura’s new indie experiment, a cross-cultural studio based in Europe and Japan, was the DJ rhythm game/educational tool Hexagroove. The educational elements of the game were not a core point (“That’s edutainment, and there’s a space for that, but that’s not where I want to go.”), but the game wrapped its lessons on using the real tools of DJs within more traditional Guitar Hero-esque rhythm segments, among others. The learning experience becomes a transformative gaming one. “The best thing that we can do is game creators to make the person who comes out of playing our game a bigger, better, and stronger person than they were coming in,” was the motto shared by Ventura, that drove much of the development.

With this in mind, for a creator whose games are so directly involved in the act of performing music – whether that be the DJ styles of Hexagroove, the cheerleading of Elite Beat Agents or even the act of singing in Lips – Backbeat is a notable departure . Even being built upon many of the tools the company had refined in their previous project, a look at the game reveals a title less about the act of performing and more a story-driven experience questioning the why of performing.

Ventura talked about the internal efforts in deciding what direction the next project should take. “We had a prototype competition internally. We had some that we kind of felt good about, but we had to choose one that wasn’t my idea, it was my co-founders,” he said. “He was inspired a lot by puzzle games like Cosmic Express and different kinds of games where you have to solve a puzzle by looking at things in different ways. And the fact that music was produced by the puzzles was something that he had thought of, too, because we have a really rich Music Technology code base in our company.”

Even in this experience there are the roots of learning music hidden in the backbeat’s many systems. “If you want to get deeper, there’s an S rank, and how well you get that letter rank is based on how well you follow the rules of music,” Ventura explained. “Although we don’t call them the rules of music. We’re hiding something inside of something sweet. I wanted to work in freedom of expression so people had some control over the music that was produced if that was something that was attractive to them. But by all means, it’s a puzzle game with mash-ups to the strategy genre like XCOM.”

The result is an intriguing game about the reasons people create music, wrapped in the sensibilities of the 1990s. This even includes the game’s Geocities-inspired official website. The music of the period is naturally fitting of the game too, with a predominantly funk sound chosen in part because of how well the instrument delineation worked for multi-character puzzles (although city pop, dance and even ska were also on the table). It also has the more whistful tone to match the game. “Nowadays, you don’t hear a whole lot of funk, but it’s toe tapping, and it’s much easier to dance to maybe then something like ska,” said Ventura. “We wanted to produce a feeling that was folksy and positive. It’s a lighthearted story; there’s a bit of drama here and there, but we want everybody to have a good time.”

How this turns out remains to be seen, although we shouldn’t have long to wait, since the release is scheduled for the first months of 2023. Backbeat has the potential to be an entertaining puzzle title for fans of the genre, while bringing a flair from musicians like Jem Finer (the saxophonist in The Pogues). It’s a game celebrating that spark of creativity we all should cherish.