Action MMORPG dies on PS4 and Xbox One in November – what happens to the PC version? 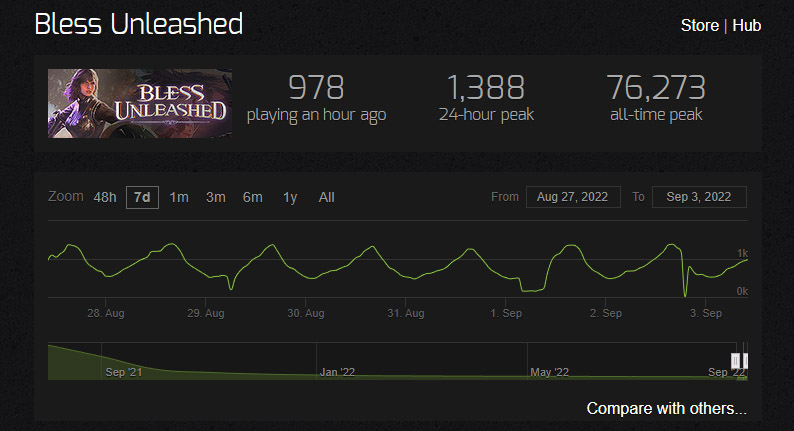 The MMORPG Bless Unleashed was released on consoles in 2020 and is now coming to an end. Support for the game will end on consoles in November 2022, but the PC version will not be affected, at least for now.

This is Bless Unleashed: The free action MMORPG was the reboot of the previously failed Bless Online and was developed by Round 8 Studios. The publisher was still Neowiz.

The game first appeared on Xbox One and PS4 and a little later, in August 2021, also on Steam, where it even ended up in the top 10 most played games for a short time. But now Neowiz is announcing that support for the console version will be discontinued in just a few months.

When will the game go offline? The servers are expected to shut down on November 30th at 8:00 p.m. local time (via Blessunleashed.com).

Gamemaster events will also be held for the remaining players until the servers close.

What will happen to the PC version? The PC version of Bless Unleashed is unaffected by the shutdown, at least for now. While Neowiz was the original publisher of the MMORPG on Steam, the rights and development of it were handed over to Valofe/VFUN in January 2022 (via steam powered).

See also  Try Star Citizen for free? This is now for a week!

Valofe / VFUN will be familiar to some of you as the publisher of the MMORPGs Riders of Icarus and Atlantica. Both are games that languish on Steam with just over 100-150 active players per day.

In comparison, Bless Unleashed is moving according to the stats site Steamcharts.com with around 1,388 daily active players, which gives some fans hope that the MMORPG will continue, at least on Steam, for a longer period of time.

By the way, some players suspect that Bless Unleashed will be switched off so that Neowiz and Round 8 Studios can invest more resources in their new game Lies of P, which was very present at gamescom 2022.

All new games and 36 trailers of gamescom 2022 Opening Night Live.