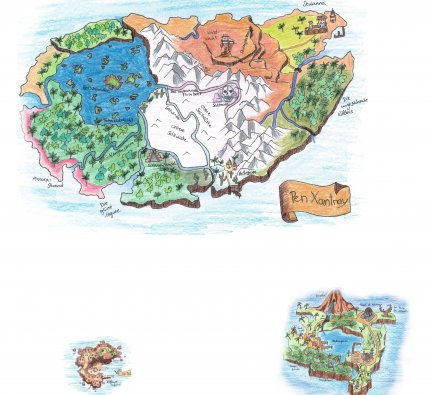 You can find the most important information about the Gladîn 2: Shattered Worlds campaign here, in this article. We briefly describe the world to you, outline the playing conditions and give you a Who’s Who of the player characters. So if you’re reading the GM Journal and want to look up a detail about one of the heroes, you’ve come to the right place.

These three islands are the starting area of ​​the new campaign – this area should be sufficient up to about level 7.

Gladîn 2: Shattered Worlds is a homebrew sequel campaign set 60 years after the first in the series. In terms of story, the two stories have little to do with each other, only a few old acquaintances reappear in the form of NPCs. We are using the Dungeons and Dragons 5e rulebook and plan to play once a week, on Saturdays. The lore is partly borrowed from D&D, but also sometimes rewritten and largely fictitious.

The campaign can be roughly divided into three parts. The first part is a classic South Sea island adventure and should keep the heroes busy until about level seven. This is followed by a city game up to level twelve. In the higher levels, players return to partially familiar areas from the first campaign, and after reaching level 20, Gladîn 2: Shattered Worlds should end.

The lore of the world

The campaign takes place in the year 5560 on the world of Erîn, a planet of the material plane. It’s a high-magic campaign where the use of magic and magic items is part of everyday life. Common races include humans, elves, dwarves, tieflings, gnomes and halflings, tabaxi, tritons, and later in the campaign satyrs and centaurs.

In recent decades, magical technology has advanced so much that airships, firearms or self-propelled carriages are no longer uncommon. This is of course quite different at the beginning of the campaign, because the heroes start on a sleepy group of islands far to the south, in the middle of a sea of ​​stars. Technological progress has not yet reached this point.

The main scenes of the campaign

See also  New World: 5 things you should do before the release of Patch 1.2

What happened 60 years ago – Gladîn 1

The elven war between the Summer Kingdom and the Winter Kingdom was in full swing. To tip the scales in favor of the summer elves, Queen Titania devised a cunning plan: through intermediaries, she tricked a group of adventurers into breaking the seal on a secret chamber beneath Gladîn, the human kingdom. This released a magical mist that engulfed Gladîn and turned men and beasts into monsters – but Winterking Maberius was no longer able to siphon the mist into his realm to strengthen his armies.

So the very adventurers who unwittingly caused this calamity went to find four Seal Stones so that they could open this chamber completely and destroy the fog monster. They finally succeeded and on their journey they also learned a lot about the wars and plans of the elves. Titania fell in battle and her successor, the gentle Juliana, became the Summer Queen. The adventurers joined this new ruler and fought at her side against the Winter King. Eventually, they brought Maberius to his knees in an epic battle and forged a shaky peace between the elven realms.

The heroes of the first campaign were called: Alin, Catgal, Fulgur and Asterisk. There were also other player characters, some of whom had been hired as support or students: Elbalar, Illario, Laxus, Lydia, Shaba. Most of these characters are still alive, but they are busy with other tasks or on other levels.