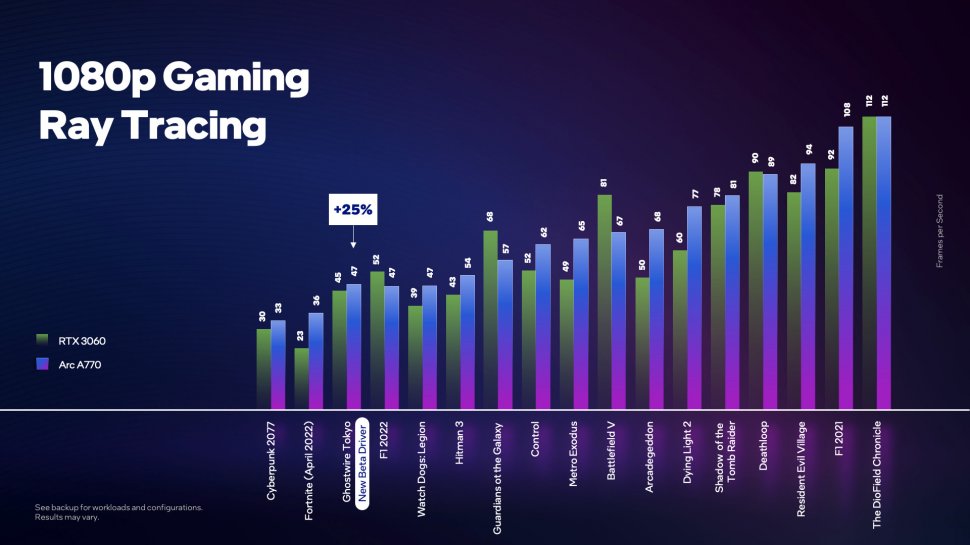 With a deep dive into its in-house super-sampling technology XeSS, Intel not only tried to explain this aspect of Intel Arc to the general public, but also wanted to make it palatable. Another video with Tom Petersen and Ryan Shrout is now about ray tracing.

This has already been shown in connection with Arc, but the demonstration was based on the Arc A380 entry-level solution. In the current video (via intel) meanwhile it goes into higher performance realms, which are measured in the benchmarks with the middle class from Nvidia.

If you take a quick look at the technical details, the Arc A770 has 32 Ray Tracing Units (RTU). They offer full hardware-based ray tracing acceleration. It consists of several units for the calculation of box intersections, the traversal pipeline, a unit for the triangle or quad intersection as well as a dedicated BVH cache. At the top, Intel mentions calculations of 12 box intersections and one triangle intersection per cycle according to the hardware constellation per existing Xe core. However, more precise key figures are saved for the product portfolio.

In addition to this dedicated ray tracing hardware, there is also a thread sorting unit. Roughly speaking, this is responsible for sorting the different workloads for shading the target triangles and for arranging and summarizing jobs according to their calculation time for the Xe cores. The aim is to achieve the best possible coherence in the calculation, which ultimately benefits efficiency.

See also  Twitch Streamer Says If A Guy Talks Like A Typical Valorant Player, She Would Never Date Him

How this is ultimately reflected in the performance is first demonstrated using an in-house Intel tech demo. It’s simply called “Spheres” and shows a multitude of spheres that move across the screen in different patterns. In this demo, a Geforce RTX 3060 is compared. In the test run with only one shader, it hardly stands a chance against the Intel Arc A770, which is vastly superior with 69.5 compared to 33.9 frames per second. With 128 shaders, i.e. different materials for the spheres, it goes down to 21.6 fps for the RTX 3060, while Intel’s Arc A770 offers 52.8 fps in this category.

However, it is on par in the 1080p gaming benchmarks with active ray tracing. Intel claims overall victory here, although it is also subject to the competition in several titles. Ghostwire Tokyo proves that you can get additional performance, especially through further work on the driver. Corresponding optimizations ensure a 25 percent increase in performance, which in turn puts you wafer-thin in front of the Geforce RTX 3060 instead of leaving the field to the competition. There are also some benchmarks in higher resolutions including XeSS.