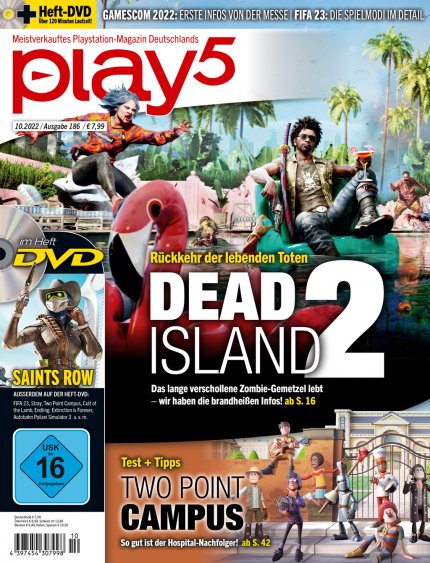 Nothing has been heard of it for a little while, now the zombie cat has been let out of the bag and Dead Island 2 has come back to light. We’ve already had an in-depth look at the undead carnage, and in our cover story we’re revealing why it’s surprisingly cool and, unsurprisingly, will give USK a headache when it’s due out in February. We also got fresh impressions of FIFA 23, in our XXL preview you can read everything about the updated presentation, Ultimate Team, the career mode, as well as pro clubs and the VOLTA mode. For more previews, check out the latest play of The Dark Pictures Anthology: The Devil in Me, the Alone-in-the-Dark reboot, and charming theme park game Park Beyond.

The highlights of this issue also include the tests for Two Point Campus and Autobahn Police Simulator 3. Two Point Campus, because it has become a very successful business simulation that even trumps the already good predecessor Two Point Hospital. And Autobahn Police Simulator because it’s such a rude botch that we once again have a nice dirty slating ready for you. Let’s put it this way: Tester Chris had to laugh very loudly very often. But also very often cry quietly. “More normal” tests on Saints Row, Cult of the Lamb, Thymesia, Rollerdrome and other current games are also in the magazine.


And while we’re on the subject of frolicking: What has been frolicking in the gaming landscape for 15 years are the Big Daddies in the Bioshock series. Reason enough for us to implement a juicy special for the anniversary of the atmospheric shooter series, along with a report on the gaming industry icon Hironobu Sakaguchi, who gained notoriety above all for his work on various Final Fantasys.

The entire play5 team wishes you lots of fun with the new play5 10/22!

play5 08/22 with cover story for Marvel’s Midnight Suns, preview for Street Fighter 6, tests for TMNT: Shredder’s Revenge and much more

Of course, the new play5 is also available in digital form! From now on, your favorite magazine will accompany you everywhere – whether on a tablet, smartphone, Kindle Fire or in the browser. Also on epaper.videogameszone.de for all common browsers, in iTunes storeon Amazon for Kindle Fire and im Google Play Store available. Register once – read on all platforms!