Ron Gilbert says: The players have made Monkey Island something that it isn’t. 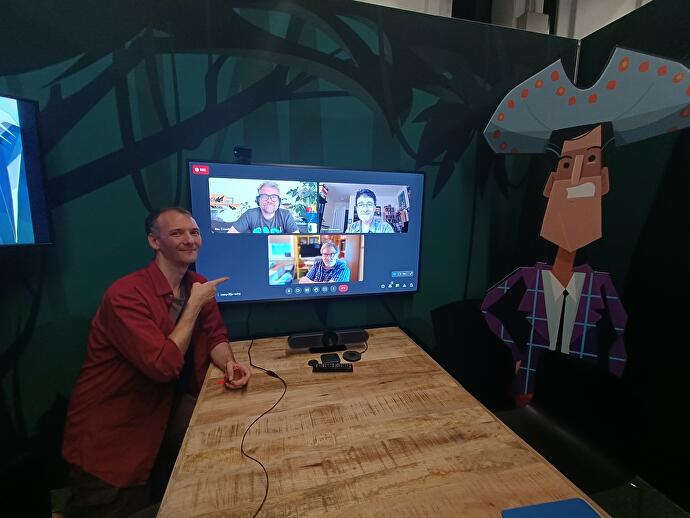 “I think after Monkey [Island] 2, none of us thought anyone would ever make a Monkey Island game again,” said Dave Grossman, who has worked on numerous Lucasfilm Games and Telltale titles, including The Secret of Monkey Island, Day of the Tentacle and The Walking Dead. Sitting across from me with him are Rex Crowle and Ron Gilbert – if only in the image of a video broadcast that I was able to talk to the developers about at gamescom.

It’s a pity, of course, that I can’t shake hands with either the cult developer or his colleagues. But of course I’m happy that this interview exists at all! That’s probably one of the plus points that the VirusTM has given us. And the trio has a lot to tell. As a small preview, it should only be mentioned at this point that Rex Crowle is the one who, as art director, is responsible for the hotly debated drawing style…

But why is there Return to Monkey Island? Why did Ron Gilbert and Dave Grossman get together now to make a sequel that probably hardly any fans believed in with this cast? That’s my first question and when Gilbert begins to talk, I already suspect that this will be a very pleasant appointment, despite the distance to the developers and the loud hustle and bustle around me at the trade fair. He’s in no hurry at all. Leaning comfortably in his chair, he speaks with an infectious ease, as if he were remembering a relaxing vacation day.

So why now? Because Gilbert has long wanted to go back to Guybrush and LeChuck and resolve that “WTF moment” that he once let part two end with. They had “work to do,” as Grossman puts it, so one thing was clear from the start: Return to Monkey Island would pick up right where Monkey Island 2 left off. Therefore it is not a sequel to the later episodes. It finally had to be clear what exactly had happened at the fairground!

The question remains why this enlightenment is only now available and the fact that Gilbert could not alone decide the fate of the series has a decisive part in it. “With Disney and Lucasfilm […], that quickly becomes complicated,” he describes the situation. He was always looking for an opportunity, but only the current publisher Devolver made the decisive step possible. “They had Disney ties and when we started talking, I was like, ‘OK, this might actually work,'” he recalls, adding that it was purely a business issue. There was no lack of ideas or creativity.

At the same time he makes it clear that he had definitely finished his work directly after the predecessor. For one thing, he wanted to advance professionally at the time, which is why he left Lucasfilm Games to start his own company, Cavedog Entertainment (Total Annihilation). On the other hand, he points out that Monkey Island wasn’t the cult hit that it would develop into over time. He shakes his head and shrugs when he says, “It was just a game.”

“It’s not like we created this mind-blowing million-seller and then just walked away,” says Gilbert. Of course, some people liked the series and it sold “okay”. But as Grossman emphasizes at this point, none of the developers thought at the time that it would ever go on.

Of course it’s different today. Today, many have grown up with pirate wannabe Guybrush Threepwood and villain LeChuck, have fond memories of their adventures, and have long since introduced their offspring to them – making developing a sequel in the hands of this team a tricky challenge. After all, Gilbert, Grossman & Co. somehow have to live up to these enormous expectations.

Or not. According to Gilbert, many fans have made the series into something that it is not and that no sequel in the world can do justice to. Grossman adds, “You’re not just dealing with people’s memories, you’re dealing with memories inflated by unrealistic nostalgia. It is impossible to achieve this perfection.”

The solution? Grossman says it’s “best not to worry about it,” and Gilbert says there’s no other option. Because if you were mainly concerned with satisfying the fans, the result would be a “fundamentally uninteresting game”. So the creative minds decided not to worry about possible expectations or do any market research, but just like before Monkey Island was a pop culture phenomenon, “just a really good, fun pirate adventure game called to make Monkey Island.

But probably neither Gilbert nor Grossman nor Art Director Rex Crowle expected the angry citizens who would grumble about the new drawing style after the unveiling of the first pictures – in a way that went far beyond expressing constructive criticism. Angry letters have been pouring in at Lucasfilm Games and other studios before, albeit months after a game’s release. And that’s exactly why the intensity is much higher today: Angry fans can react much faster and sometimes even really enjoy the uncouth outcry.

That’s inevitable and you have to take it easy, Gilbert says: “At a certain point you’re like, ‘You know, we made a game that we really love. We love the style, we love the interface, we love the puzzles’ – and keep working in peace.

Crowle didn’t even worry about the art design at the beginning of development. Each part of the series would have ended up looking completely different. “If there was this one style and Ron had come up to me and said, ‘Do you want to go in that direction?’ I might have said it was a little too much.” As it was, he left various elements from all the predecessors flow into the current design – the way in which the backgrounds in Monkey Island 2 were drawn, for example, is almost identical to how he and his colleagues do it today. “The only difference is that we don’t scan them in afterwards and scale them down […]but draw them directly into the picture”.

That being said, Crowle, who previously worked on LittleBigPlanet and Tearaway Unfolded at Media Molecule and on Psychonauts 2 for Tim Schafer, is convinced that looks aren’t as important as they might seem at the moment. In any case, he believes that you have to play Return to Monkey Island first and then you are drawn into its world completely by yourself and like in the past, you get a feeling for the characters and you follow the adventure that they experience with excitement.

I want to know why Crowle decided on exactly this art design, which he doesn’t answer directly, but the final form was probably influenced by two facts. First, there is the anecdote that Gilbert used a Doodle drawing as a desktop background for a long period of time, which Crowle had put online more than ten years ago. So when it came to finding a style for the current game, he and Gilbert would have talked and then started to develop the idea further.

On the other hand, of course, they had to consider what both looks good on a large screen and is also recognizable on the Switch’s handheld display. At the same time, the figures should convey emotions, i.e. be animated in an expressive way, “without getting lost in lengthy detailed work such as creating the crow’s feet next to their eyes or something similar.” Another important point is that Guybrush & Co. blend harmoniously into the scenery fit without drowning in them.

“Also, it was really interesting to learn from Ron and Dave how much detail you should put into these backgrounds.” As an artist, he is always inclined to add a number of subtleties – which here, however, can lead to the fact that players never create a room designed in this way would leave because they scour every meaningful-looking pixel for interactive opportunities. In a classic point-and-click adventure, less is obviously more.

Did you actually consider using 3D graphics instead of two-dimensional images? Interestingly, Crowle initially laughs in response to the question before Gilbert takes over and says he’s thought about it. Ultimately, however, he decided against it, because using highly stylized three-dimensional characters quickly ends up in the uncanny valley. Gilbert would still like to try it! He just points out: “You think the current style is controversial? Then wait until someone makes a 3D version of Monkey Island.”

This is where the first part of our interview ends, which is mainly about the legacy of the big name. The second part will shortly continue, in which Ron Gilbert, Dave Grossman and Rex Crowle, among others, will go into the new user interface, describe an interesting part of the development process and Gilbert will explain what he is really about when he creates an adventure like Return to Monkey Island.