WoW: What actually happened to the fighting guild – where is the “big thing”?

When the fighting guild was introduced with patch 5.1 during WoW: Mists of Pandaria, countless players were eager for the few invitations. Masses of gold changed hands for the invitations, just so you could take on dangerous opponents in the depths of Deep Tram or the mud of Orgrimmar. The more of them you defeated, the higher you climbed in rank and the harder the fights got. Of course, some rewards also awaited the brave fighters.

In the following expansions, the fighting guild was then closed again and again, revised and reopened with new opponents. That’s actually how it was for the current expansion WoW (buy now ): Shadowlands introduced. With the pre-patch, the fighting guild closed its doors at the end of 2020. Officially, the bouncer tells us, it’s for repairs and preparing for the next big thing.

WoW: Dragonflight’s new interface options replace most addons in the game. Take a look at what you can change in edit mode.

WoW: Dragon Flight: Paladins get different battle rezz – depending on the spec

In the WoW: Dragonflight beta, paladins now have a battle rezz that differs from spec to spec – which is exactly how it needs to be!

Fallen victim to the scissors?

This next big thing obviously never came. Because during the entire Shadowlands expansion, the fighting guild remained closed. No new opponent, no new quest, no nothing. Apparently innovations of some kind fell victim to the scissors.

That would also be understandable in the case of Shadowlands. An expansion in which a complete patch is missing and the time until the following expansion has to be bridged with an experimental season – there are truly more important things than a new round in the fighting guild.

What’s next in Dragonflight? 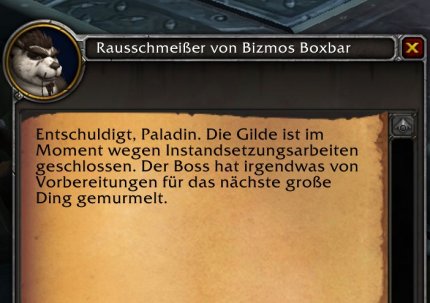 We’ve been waiting for the next big thing since BfA.

Every other WoW player probably understands that the Battle Guild was not a high priority for developers during Shadowlands. But now the expansion is coming to an end and Dragonflight is in the starting blocks. It would at least be nice to hear from the developers if and how the fighting guild will continue.

After all, a new extension with a new setting is perfect for this. Plenty of dangerous creatures await on the Dragon Isles that would make excellent use of arena combat. Maybe that’s what the “big thing” means: a real dragon! Or at least a little whelp or a dracthyr.

This race is new to Stormwind and Orgrimmar and is not very welcome anyway, as the Dracthyr introductory campaign shows. So why not send some of their best fighters into the arena to entertain the crowd and boost your reputation? 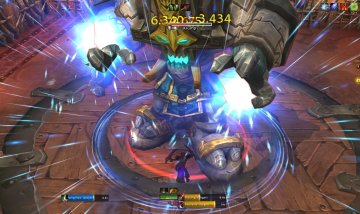 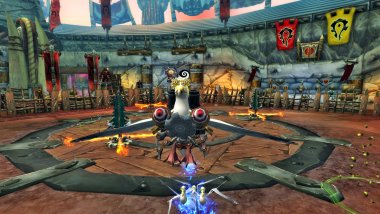 WoW is of course an MMO and as such designed for group play, and nothing will change about that. However, the past has shown that solo content is also important even if it has no relevance to the story. Things like the Mage Tower or the Crucible could inspire many players. This usually didn’t last long, but the development effort was also limited.

With the Battle Guild, the developers might not be able to emphasize this factor, but they could show that they care about these players on solo paths. Especially since they should also have fun doing it. Because where, if not in the fighting guild, can you let your imagination run wild and create some really wacky bosses.