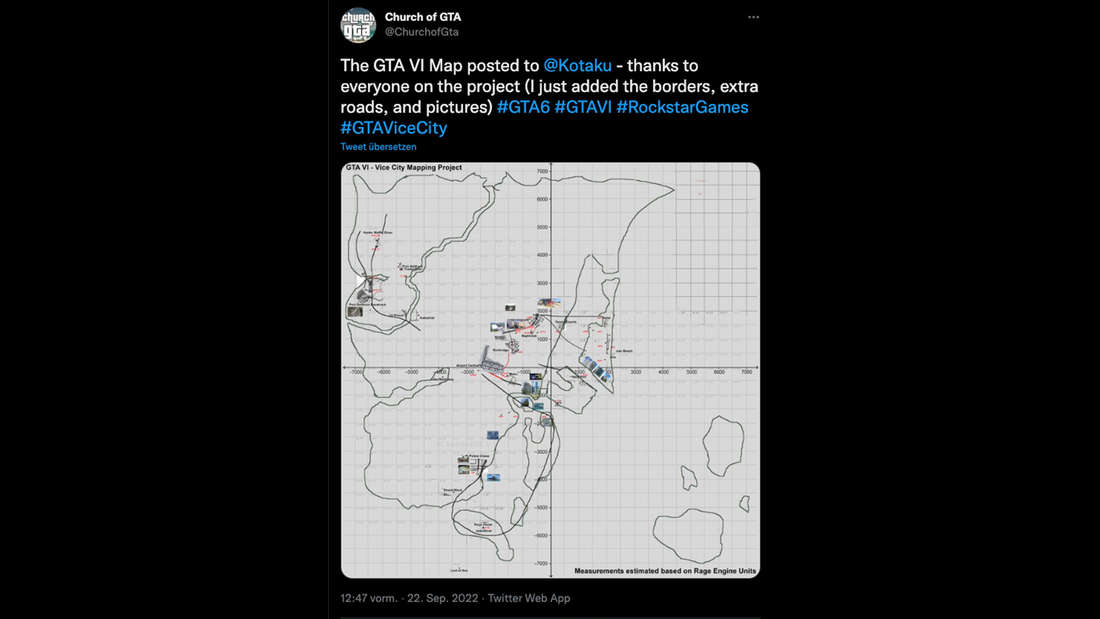 Probably the biggest leak of all time was published for GTA 6. Based on the material shown, fans have built a first map for the game – it’s gigantic.

New York – GTA 6 has long been awaited by fans. The joy was all the greater when Rockstar Games published that they were actually working on the next title in the GTA franchise. That was early February. After that it was quiet for a long time – until September 18th. On Sunday, a leak published over 90 clips that showed the first details about GTA 6. From this, fans have now constructed a first map.

GTA 6: First map leaked – the open world should be that big

Huge open world: September 18, 2022 will probably go down in gaming history. On this day, a leaker published over 90 clips for GTA 6. The GTA 6 Mega Leak showed a lot about characters, cars and settings. Bloomberg reporter Jason Schreier confirmed shortly thereafter that the content shown was actually penned by the New York developers and is therefore real. Therefore, the rumors about the protagonists in the next title have come true and Rockstar will introduce a female character in GTA 6 for the first time.

The 90 clips, which unfortunately have long since been deleted, showed all sorts of gameplay from the early stages of development. It is precisely this material that fans are now using to create a first map of GTA 6. To do this, they use the various coordinates that could be seen in the leaked video material. Twitter user @ChurchofGta has one Map of the fan project divided:

By all appearances, the GTA 6 map is going to be really huge. Fans are already over the moon about the gigantic open world. In addition to Vice City, there will probably also be Port Gellhorn (in the top left corner) that fans can visit. In addition, the open world could continue to expand after the game is released. An insider predicts GTA 6 DLCs with new cities that will be playable after release.

Unfortunately, even if the first draft of the map looks realistic, that doesn’t mean that the map of GTA 6 will stay like this. The developer from New York could decide to turn all the scenes and coordinates shown inside out again in order to still be able to surprise fans after the leak.