WoW: “Almost everyone uses it anyway” – why is there no official DpS meter?

For WoW: Dragonflight, the Blizzard developers are taking on something that they have neglected for a long time. The interface is finally getting a general overhaul and will be optically significantly modernized. But that’s not all. As has often been the case in the past, the developers are taking over some features in the original game that were previously only possible through the use of addons.

In the case of the interface, for example, we will soon be able to adjust the size and position of all elements in the interface as we wish. Previously we had to use addons like ElvUI or similar alternatives for this. The current change is a significantly larger step than many of the adjustments in the past. Blizzard is aware that players should be given things that they get in the form of addons anyway.

That has now a new discussion upset, which probably would have been different just a few years ago. Should Blizzard finally jump over its own shadow and integrate a DpS meter in the official game?

With Phase 4 of WoW WotLK Classic the dungeons in the Frozen Halls are opened – we tell you what awaits you in the Soul Forge!

The Champion’s Trial, the 5-player dungeon of the Argent Crusade, opens its doors in Stage 3 of WoW WotLK Classic – what to expect?

Everyone has it, everyone uses it… well, almost everyone

Addons belong to WoW (buy now ) and are an integral part of the MMO. If you look at the download numbers of the individual addons, it quickly becomes clear which addons the players use most frequently. After the BossMods (DBM and BigWigs), the DpS meters (Recount, Details! and Skada) take second place. The Raider.io addon follows, as well as WeakAuras and Bagnon. 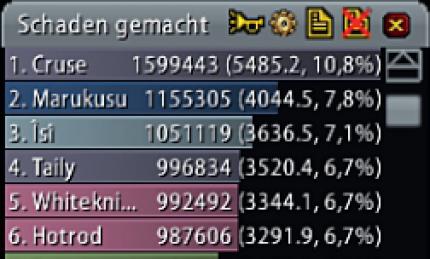 The bars of a DpS meter can be found somewhere in almost every interface.

As unpopular as DpS meters have been in the WoW community for a long time, it is also clear that almost everyone uses them! And for different purposes. Because the Skadas of this world can do much more than just spit out a DpS value, even if that is of course their most important purpose. From threats to interruptions to the cause of death, you can check almost everything from the past fight and improve if necessary.

Blizzard has practically taken over four out of five

Looking at the top five addons reveals something worth noting. The developers have taken some core features from all addons except the DpS meters and packed them into the original game.

Bosses have long announced their most important actions through voice lines, energy levels or the like, and the Mythic Plus score is ultimately nothing more than the Raider.io score. WeakAuras wasn’t directly adopted, but thanks to the editing options of the buff and debuff bars, a similar effect can be achieved in Dragonflight. Add to that the new pocketing features of the upcoming expansion and you’ve got the list full.

See also  No FIFA at gamescom 2022: EA cancels the fair

Only the DpS meters have not even been touched by the developers with pliers. Understandable, because this is a topic with a lot of potential for controversy.

Yes No Maybe? Does an official DpS meter make sense?

When DpS meters were discussed in the past, the prevailing opinion was that you didn’t need such things in a game. They would pressure players who encourage toxicity and anyway, it should be about fun, not performance.

These opinions still exist, but in the meantime even the biggest deniers have probably gotten used to the fact that such tools exist and they can’t be banned from WoW. And so the reactions when the topic was recently discussed again were much more positive than a few years ago.

DpS meters are a work of the devil. That opinion still exists.


In short, the prevailing opinion in the discussion about whether Blizzard should bring an official DpS meter into the game was: “Everyone uses it anyway, so why not?”

Simpler, clearer and for everyone

The advantages of an official DpS meter are obvious. You no longer need an external addon and this makes the feature equally accessible to all players. This would also work in the beta, for example, where every second question in the chat is currently about how to get the DpS meters to work. Understandable, how are the players supposed to give feedback on individual ways of playing and balancing when they can’t tell at all what their classes are doing at the moment. 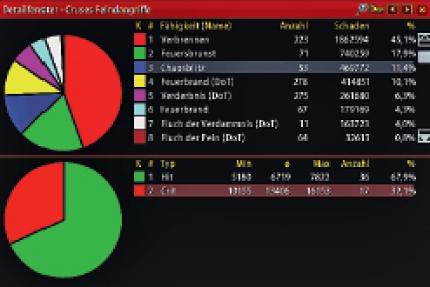 DpS meters can do much more than just display pure DpS.


The fact that an integrated system would probably use fewer resources than an external addon is also taken into account. But it is also clear that all of these reasons are rather weak. Because an integrated DpS meter that is offered as an option could probably not do more than the addons can already do. Which brings us back to “Why not?” brings.

Because such an integration is unlikely to bring any really negative influence. The toxic pro-player kicks the non-damaging noob out of the group, whether the noob is aware of it or not. The noob, on the other hand, is unlikely to be frustrated because as a beginner in a game, they’ll do less damage than a veteran. And low-damage veterans? In 9 out of 10 cases, they probably have a DpS meter installed anyway, or they can simply switch it off if they wish.