AM5 motherboards for Ryzen 7000: Biostar with X670E Valkyrie in detail 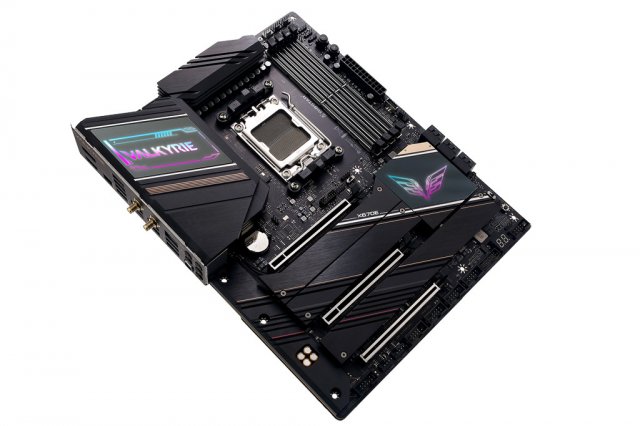 09/26/2022 at 5:41 p.m
from Maximilian Hohm –
With the X670E Valkyrie, Biostar presents a high-end model for socket AM5. In comparison to models from the competition, however, important information such as price, availability and network connections used is missing. Nevertheless, the mainboard offers all the advantages of the X670E chipset. Read more about this below.

In line with the approaching start of sales of the AM5 processors, more and more AM5 boards have recently been introduced and many popular models have received direct successors for the AM5 socket. What they all have in common is a currently very high recommended price, which is justified by complex PCBs with many layers that serve to ensure high signal integrity. In addition, there is the exclusive use of DDR5 memory and, depending on the chipset, the parallel use of PCI-E 5.0 for graphics card and SSD or one of the two components.

With Biostar, a less common manufacturer in this country has now presented a new circuit board for Socket AM5. The Biostar X670E Valkyrie represents the upper end of the flagpole including a high-end chipset. Two expansion cards can be found on the board in PCI-E X16 slots of the fifth generation and one of the fourth, while up to four M.2 -SSDs can be installed, with two slots each supporting PCI-E 5.0 and two PCI-E 4.0. The power supply consists of 22 phases with 105 A power stages and a large heat sink.

Although the Biostar X670E Valkyrie is already listed in the PCGH price comparison, it is not yet available anywhere. Biostar does not have a specific release date, although the release of the processors tomorrow is a valid assumption. An RRP for the mainboard is not yet known, but considering the prices that other manufacturers are asking for boards with the X670E chipset, it should be assumed to be more than 300 euros.