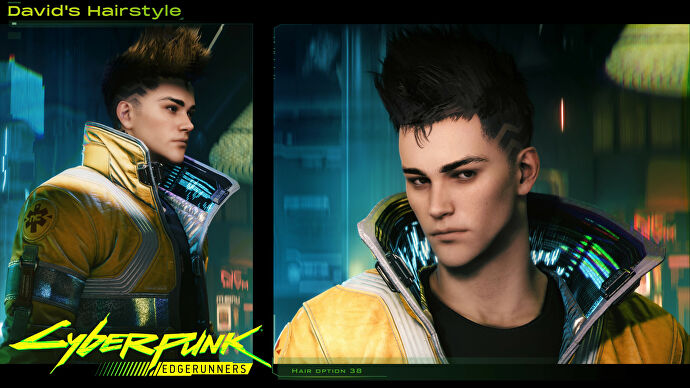 A great many new Cyberpunk 2077 mods are adding bits and pieces from Cyberpunk: Edgerunners, the new ultraviolent spin-off anime series. Various mods let V dress up as characters from Edgerunners and wield their weapons, as well as adding music, adverts, and more to the game world. Players old and new have flocked to the dystopian RPG since Edgerunners debuted on Netflix earlier this month, and I imagine more than a few might want to cosplay as their Best Girl (a controversial topic which I dare not broach).

Cyberpunk 2077 devs CD Projekt Red did officially add a few wee bits of the anime to the game in the edgerunners update this month. Players could find David’s jacket and Rebecca’s ridiculous shotgun, Guts. Modders have added a whole lot more than that.

For starters, to go with his jacket, surely you’ll want David’s phenomenal hairstyle. Sadly only for the male V, that. You might fancy a preset for David’s face other David’s pistol skin too.

For fans of short and shouty, you can get Rebecca’s pistols, Rebecca’s tattoos, Rebecca’s hairstyle and eyes.

Or on the quiet and planet-hacking end of the Best Girl spectrum, you have more options. More than a few mods try to create Cyberpunk 2077 interpretations of Lucy’s face, and another has looks for both Rebecca and Lucy, so I guess check ’em out and see which is most how you think she would look? To dress as her, you can get Lucy’s body suit, Lucy’s jacketand Lucy’s leggings—though another modder has another interpretation of her outfit as a whole. You can also arm V with Lucy’s pistol.

So you can dress as Sashaa character who only appears in a prequel music video.

Beyond cosplay, modders have whammed more Edgerunners into Cyberpunk 2077. Maybe your V wants Edgerunners posters in her apartment. or giant holoposters of Edgerunner characters going up in Night City. And V might enjoy Edgerunner’s radio mod adding a new station with music used in the show.

That’s not all. Edgerunners-themed main menu backgrounds and stuff are around too. But I’m less into that stuff. Broadly, people seem quite like Edgerunners.

I’ve not finished watching the show but have enjoyed it so far. Surely nothing will ruin the high our plucky group of upstart mercs are currently riding.

If you’re in the modding mood, the most impressive I’ve seen is still the Cyberpunk 2077 mod adding flying cars.

Following Edgerunners, Cyberpunk 2077 has seen Cyberunk 2077, with player numbers rise to their highest point since launch. Folks who played around launch will return to a game which is in much better technical shape. I envy newcomers, who get to experience a pretty fun story, some likeable characters, and a very pretty city without being mired in disappointment from bugs and impossibly high expectations. I still think 2077’s items, economy, and skill trees are largely uninteresting, and having so many filler quests makes it tiring to find the good ones (there are some great ones!), but I liked the city and some characters enough to really enjoy the games Maybe I’ll start a fresh save with next year’s expansion, Phantom Liberty.