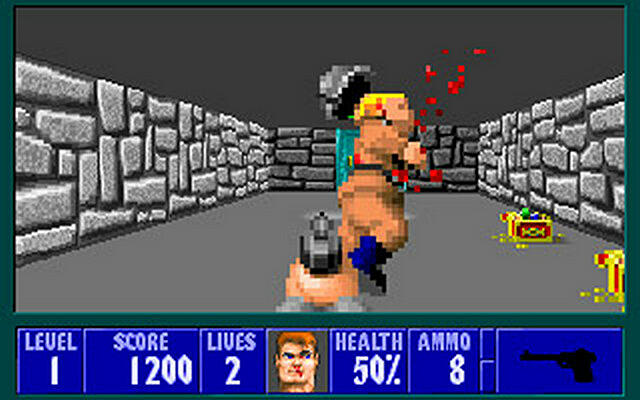 In the past, Wolfenstein 3D was often used as a prime example of the so-called “killer games”. And it was a game that also featured swastikas. That doesn’t work at all, it’s enough if you’re bombarded with it every day in Hitler documentaries on television. And yet they only shoot Hollywood’s favorite enemy here: lots of Nazis. There really is worse, right?

In the early days of first-person shooters, Wolfenstein 3D was as important to the genre as Doom, released a year later. Both come from id Software and shaped all subsequent shooters over the years – and my love for this genre, which continues to this day. Due to its confiscation in Germany, you have probably rarely read the real name in the press, rather paraphrases like “Hundefelsen 4E” or “Böser Wolf 3D”. And yet at least genre connoisseurs knew exactly what that meant.

This year Wolfenstein 3D celebrates its 30th birthday and this is not only a special year for the shooter. The confiscation in Germany was lifted in 2019, and in the same year the BPjM also removed the game from the index. And now, in September 2022, Wolfenstein 3D and Wolfenstein 3D: Spear of Destiny have received an age rating from the USK for the first time – and this in the unreleased original versions. While Wolfenstein 3D is rated 16+, Spear of Destiny is rated 18+. I don’t quite understand why there are differences here again, but it doesn’t matter.

That means: You can now buy Wolfenstein 3D as normal on Steam. Or on GOG. What a time to be alive. It took a long time, but the shooter that helped id Software achieve its breakthrough is now finally freely available in Germany. It’s actually a little sad that it took so many years in the first place, given the level of violence allowed in adult games these days, and considering that swastikas have also been waved through in the appropriate context for a number of years. Of course, this is partly due to the provider, who has to have his game checked again, but also generally to how this topic was handled. Swastikas and similar content in films, documentaries, in the Simpsons? No problem. In games? no go Good that this uneven treatment has come to an end.

So being able to write about it now without alienating or rewriting this game in any way is also a new, still unfamiliar experience for people like us who report on gaming culture. It’s good to be able to do that. So let me savor it again: Wolfenstein 3D. Wolfenstein 3D! WOLFENSTEIN 3D! I already know what I’ll be downloading onto my Steam Deck over the next few days. How was it? The new FIFA appears? Anyway, I just have to take care of Mecha-Hitler.