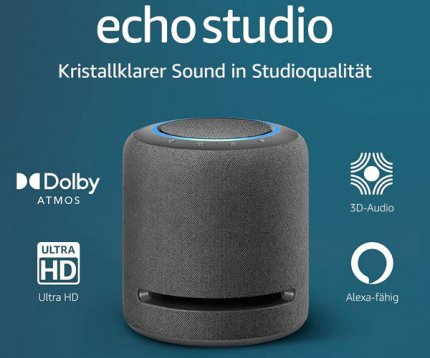 The paid subscription service Amazon Prime has been available in Germany since 2007, which, in addition to free shipping, has included more and more services over time. These include the video streaming service Prime Video, the music streaming service Prime Music and unlimited storage for photos in the AWS cloud. In August 2020, the Prime Gaming service was added for PC gamers, replacing Twitch Prime. Subscribers get about in-game items for free every month. In Germany, membership costs EUR 89.90 per year. In October there will be another smaller Prime Day for two days. Exclusive offers await on October 11th and 12th, but only for Prime members. It may then be possible to save heavily on graphics cards, SSDs & Co.

Immediately and only for a short time: Echo Studio & Co. up to 25 percent cheaper


The Echo Studio offers Dolby Atmos, a 220-watt subwoofer, as well as a tweeter and three 2-inch midrange drivers.


There are already offers today. For example, Amazon is giving a 25 percent discount for the largest Alexa device, the Echo Studio, for a limited time only. According to Amazon, the smart speaker offers a 5.25-inch subwoofer with 330 watts including a bass reflex channel in the housing. A 1-inch tweeter is installed to ensure that dialogues are easy to understand. Three 2-inch midrange speakers are responsible for the spatial sound, which radiate upwards and to the right and left. If you want, you can use an Echo Studio to output the sound of a Fire TV Stick. In order to be able to control various smart home devices, a smart home hub based on the Zigbee standard is installed in the Echo Studio. So if you own smart lamps like Philips Hue, for example, you can also control them via the smart speaker from Amazon.

See also  GTA Online: Server Down on June 22 - How long can you not play?

In order to be able to play the latest hits, the Music Unlimited streaming service is available to new customers for four months free of charge. The Spotify competitor has music in 3D audio and in CD quality in terms of bit rate. More than seven million songs have even been recorded with up to 24 bits and are available for streaming. In total, Amazon Music Unlimited offers 90 million songs in CD quality. Anyone who registers as a new customer by October 13th can use Music Unlimited for four months free of charge, after which they will have to pay EUR 8.99 a month. Audio book and radio play fans can try Audible for free for 90 days by signing up by October 12th.


The Playstation 5 can probably be ordered from Media Markt & Saturn today, and the dealers have announced a PS5 drop. #buyPS5

Buy PS5: PS5 bundle can now be ordered from Amazon – but with an expensive PS5 controller


Surprisingly, a new PS5 offer has appeared on Amazon. You can even order the Playstation 5 now. #buyPS5