CoD MW2: Beta testers positively surprised – “I can never go back to Vanguard” 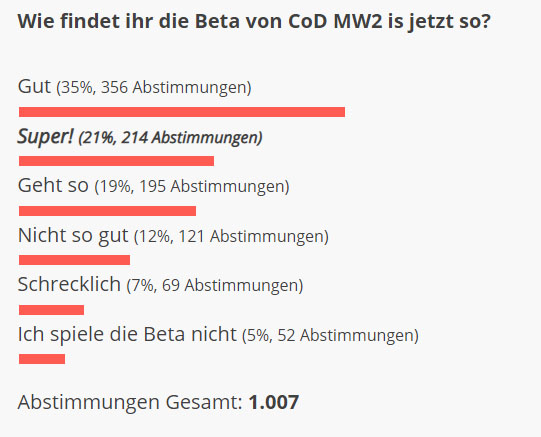 Last weekend, the CoD Modern Warfare 2 beta opened its doors to all interested players. Many of them were positively surprised by the shooter, but there was also criticism.

This was the beta: From Saturday 24th September to Monday 26th September the CoD Modern Warfare 2 beta was open to all players. For 48 hours, fans could let off steam in the franchise’s new flagship shooter and gather impressions.

The beta offered a mix of old and new multiplayer modes with 6vs6 maps like Farm 18 or Valderas Museum as well as the larger modes Ground War and Invasion. There were also gifts for completing certain milestones that carry over into the finished game.

While the beta’s progress was not saved and there was a wipe at the end, many of the players felt surprisingly entertained. In fact, some wanted the beta to never stop.

This is what the positive voices say: After the open beta weekend, a new wave of discussions and opinions about the new CoD came to the social media and reddit forums. Many of them reported that they had an unexpected amount of fun with the beta.

The weapons felt good and the Ground War mode was an upgrade that felt like the old Battlefield games. On reddit, fans wrote:

See also  The Batman and Co. on Sky in September

There were also players who actually didn’t feel like playing the CoD series anymore, either because they were oversaturated or disappointed with the previous games. They were surprised at how much fun they had in the Modern Warfare 2 beta.

Among other things, the removal of reload and slide canceling was mentioned as a positive aspect, but also the nerf of the mini-map.

That’s a stark contrast to the results CoD Vanguard got in its own beta survey pretty much exactly a year earlier. This part of the series was not well received by MeinMMO readers and was rated “not so good” to “terrible” by almost 60% of you.

“The spawns are kinda worse than Vanguard”

This is what the negative voices say: In addition to the positive feedback, there was of course also criticism. For example, the field equipment Dead Silence and the Perk Ghost are criticized, but also the respawn points on the map. On YouTube, user poorchris commented:

[…] Vanguard had bad spawns, the beta spawns somehow seem worse than MW19 and Vanguard. […] You just get cyclical spawns for the teammates that run along the edge of the map. It leads to bizarre pacing where you totally dissect each opponent for 60 seconds and then run around for the next few minutes and find no one […].

The user interface was also frequently and harshly criticized. It is too crowded and confusing, the individual display elements take up an unnecessarily large amount of space and spoil the gaming experience. This was criticized even by the players who actually liked the MW2 beta and had fun with it.

See also  Mafia 4 is rumored to be about Don Salieri

In the comments at MeinMMO, the third-person mode was also criticized because you switch back to the first-person view when aiming and it feels bad.

on reddit found this complaint as well and targeting like in games The Division or Ghost Recon was suggested as a solution. In it, the perspective is zoomed in closer to the character’s shoulder.

What did you think of the MW2 beta? Did it also surprise you in a positive way or did the criticism annoy you too much? Tell us in the comments.

Casuals vs. hardcore players: Modern Warfare 2 alienates its biggest fans in order to be more successful