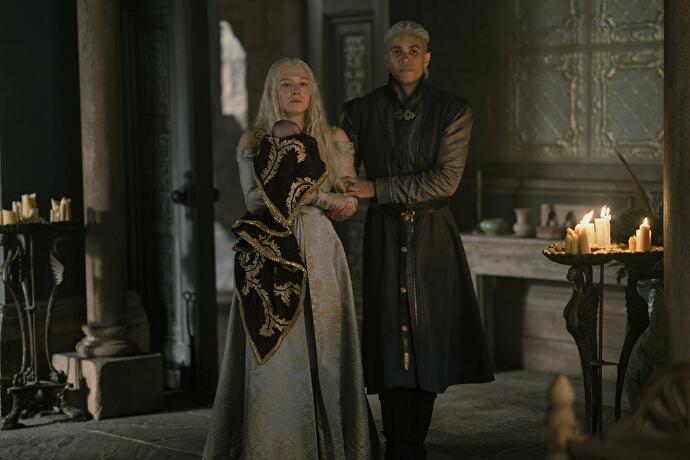 I knew it was going to happen eventually, but how uncompromisingly and without a break House of the Dragon would make its significant leap in time with episode six gave me a little whiplash. Between the fifth and sixth episode, unseen by us, a whopping ten years pass.

As usual in this series, this is treated succinctly in terms of narrative. A few more children here, a few cosmetic wrinkles or thinning hair there. You have to do it that way and no other way. But some central characters are completely swapped out for new cast members, and I’d be lying if I said it worked for me right away. Rhaenyra, Alicent and Laenor in particular hardly resemble their younger versions. I was able to overlook that over time, however, as Raenyra’s recast, Emma D’Arcy in particular, brings an appropriate intensity for a grown-up heir to the throne that suits her role perfectly.

Olivia Cooke, who recently cut a fantastic figure in Slow Horses on Apple TV, is also a lucky find in terms of cast, which quickly makes you forget that Alicent looked completely different in the last episode. Then again, hatred and resentment not only change the soul, but often also the outside, and there is more than enough of that in the air at court. Above all, Alicent – now in the constant company of the cheated Rhaenyra lover Kriston Kraut (Criston Cole) – and the controversial Targaryen heir to the throne are spider enemies. Interestingly, primarily because of the positions that two men originally put their fathers in. Ten years after episode five, they are a long way from being innocent themselves. It is an interesting facet nonetheless.

Either way, the change in cast will cause immersion hiccups that some viewers will take better than others. Especially since a lot of character development is skipped. The secret relationship between Rhaenyra and Harwin Kraft, for example, from which the third son emerges at the beginning of the episode, and the court tears its mouth at his dissimilarity to the prince consort. And Daemon is expecting his third child with dragon rider Laena Valeryon. Quick throw-in: Even as a delivery-room-hardened father of two, I find almost every birth scene in House of the Dragon so uncomfortable and shrouded in foreboding that I wouldn’t be surprised if birthrates dropped in the year following this series.

We meet Daemon at a time when his apparent taming by Laena is being subjected to new tensions. You can almost hear the clock ticking for another outburst from the once unpredictable king’s brother. Just as she ticks in the shadow of suspicion for Rhaenyra at court: The secret desecration of the throne and her illegitimate offspring increasingly question her position, which makes the former best friends even more so in the face of Alicent’s visibly more Targaryen-looking male descendants with King Viserys confrontation course brings. It’s going to be insanely ugly.

Not that it isn’t already, but Alicent’s last scruples are likely to fall now that Larys has taken her dislike of Rhaenyra and Harwin’s perceived sinfulness as an invitation to an assassination plot. Anyway, Lyonell and Harwin are history after the Harrenhal fire, which I think is a shame because I would have liked to see more of Harwin. Dealing with his illegitimate children at least did not suggest a completely depraved character. Be it as it may. Larys must have intended the attack one way or the other, but if Alicent already feels her hands are bloodstained anyway, the next level of escalation is about to happen of its own accord.

There’s a fair amount of awkward tension in even quiet scenes in House of the Dragon, and I’m starting to need a few scenes of lightness or carelessness that Game of Thrones has always had in abundance before. I doubt House of the Dragon is in the mood to give it to me. The series has clearly positioned itself as the uglier, meaner Game of Thrones and that I’m starting to like that gives me a bit of pause. Very good and demanding because it’s complicated television, which hopefully doesn’t shake off too many fans with its cast swap.