Grounded review: a survival game with the best baddies around 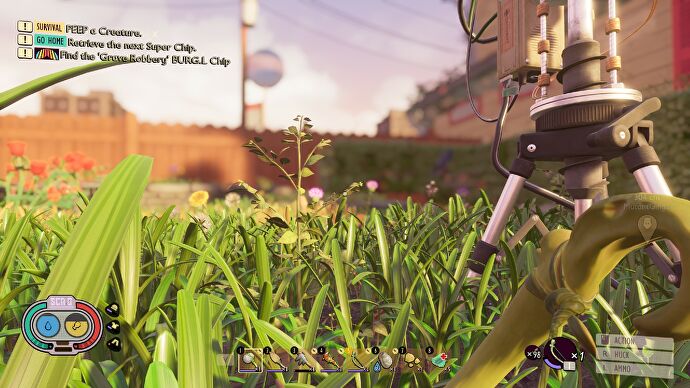 Grounded review
Grounded is an incredibly rewarding survival experience that constantly pushes you into new areas of its reactive world, filled with insect inhabitants that are some of the best baddies in gaming.

When Grounded released into early access a little over two years ago, it immediately became a personal favourite. The story wasn’t complete and the garden was rather basic, but one encounter with the wolf spider proved that this was far more than a pile of mulch. With two years of updates layering new enemies, items, biomes, dungeons, and quests onto that healthy foundation, Grounded has blossomed into a perennial survival game that sits comfortably among the very best of the genre.

Grounded is a 1980’s themed “Honey, I Shrunk The Kids” survival scenario that puts you in the very tiny shoes of four shrunken kids. Only, those shoes actually look normal size from your new perspective, and everything else looks huge. That means the wolf spider that I mentioned earlier is big enough to elicit the loudest of screams, as you probably already know. If you stopped playing upon first meeting that spider back in 2020, then it’s time to jump back in. My thoughts in tiny form, after getting zapped by a weird sci-fi shrink ray? Grounded is rad. Is that what they said in the 80s?

For most of your time with Grounded, the main loop might feel similar to any other survival game that you’ve enjoyed over the past decade. You hunt for food and water so that you can, well, survive. You make a base to hide from the beasties, and store lots of items in neat little stacks, somehow maintaining some semblance of control and organization despite the fact that almost everything in the world is out to eat you and those spiders are fucking massive.

Grounded’s main quest, which tasks you with exploring science labs scattered around the garden to find some way to grow back to normal size, gives surviving a purpose. You can find supplies, get better gear, and uncover new parts of the garden filled with secrets that advance the main quest and guide you towards the next set of craftable goodies. Grounded offers a metroidvania approach to exploration that genuinely rewards survival, rather than making it a dull goal that pads out your playtime. Getting through the day just to scoff down a tin of beans, or a lump of roasted gnat, in Grounded’s case? Nah, thanks, I’d rather just get munched on by one of those spiders and get it over and done with. Surviving another night and killing a stinkbug might give you the parts you need to make a gas mask, unlocking a new part of the garden that you couldn’t explore before that’s filled with new materials and mysteries to uncover.

Exploring is a real treat, too, because Grounded’s garden is gorgeous. Sunlight beams through towering blades of grass and illuminates the ground with a warm, orange hue that makes you want to cozy up with a blanket. It peaks through the leaves of the autumnal oak tree, making it shimmer like a mirage as it comes into focus. As you gaze up from your tiny person perspective, you spot bees buzzing between flowers in full bloom, with purple petals dancing through the air as they fall to the ground. Even The Haze, a biome filled with noxious gas, has an alluring charm that begs you to explore further.

I’m usually a stickler for zombie survival games, such as Project Zomboid and State of Decay, which offer a sea of ​​urban browns and grays. Grounded’s garden is far more vibrant, and it often looks shockingly inviting. It almost fools you into wanting to stay tiny forever. After all, living off the grid is the dream, and I don’t think tiny people need to worry about rising house prices, right? But then you see the grass tremble as one of those huge spiders stomps towards your base and oh no, absolutely not, please make it disappear. See, Grounded’s garden isn’t a holiday destination, despite how picturesque it might seem. It’s a backyard filled with bad bugs, and they’re some of the best enemies around.

Grounded makes the world feel like a living ecosystem better than any other game I’ve played. The bugs aren’t just obstacles that generate at the edge of your vision to give you a fright. They roam the garden on missions of their own. Bees dart across the skies, stealing pollen from the tallest plants. Ants scuttle past your base as they hunt for smaller critters, such as Aphids and Weevils. If you leave items lying around, they might haul them back to their nest to satisfy whatever lurks in the tunnels below. It’s a mesmerizing network of systems and behaviors, and watching all of the insects pitter patter about makes Grounded’s garden one of my favorite video game locations. They aren’t just in your way. You’re in their way, and they’d be happier if you weren’t around. Once you get over your fear of their sheer size, hopping into creative mode and following the insects around is an absolute joy, as it proves that this is a world that could keep ticking regardless of your presence.

And, if you’re playing with pals, it really can keep ticking in your absence. One of Grounded’s more recent updates introduced Shared Worlds, which allows you to store your multiplayer saves on the cloud and share them with friends. Then, your friends can hop back in while you’re away, removing the need for a host. Now, plenty of other survival games have done this. Minecraft has Realms, for example, but there’s a big difference. Minecraft Realms are a paid subscription, while Grounded’s Shared Worlds are free. They cost nothing! As a kid, that would’ve been the dream. Hell, it’s the dream now! Share your worlds for free! It’s baffling that the two games I’m comparing here are owned by the same parent company and have such different models, but play Grounded if you’re looking for a way to share worlds without forking over extra cash.

There are some small imperfections to note – these aren’t dedicated servers, so whoever loads up the world becomes the host for that session, and players will get booted and need to rejoin if the host leaves – but I’m willing to be patient in the absence of an additional price tag. Just don’t expect this to remove any connectivity issues, as someone will still become host of a peer-to-peer server when they load into the world.

Whether you’re surviving together or alone, Grounded is an absolute hoot. The only time that it is, in fact, not a hoot, is when you’re trying to build a base and things snap together awkwardly. Sometimes, you’ll rotate a wall or move a chest and it’ll start uncontrollably jittering like a child after eating too many blue Smarties. This is maybe the one piece of standard survival jank in Grounded, which is otherwise free of any horrendous bugs that you might’ve come to expect from the genre. Well, there are horrendous bugs, but they’re alive and trying to eat you.

Occasionally awkward placement aside, the base building gives you a lot of freedom to make some expansive structures. Sure, you can chuck a few walls and a door together and call it a house, but why not take it further? Throw down some scaffolding and build that house into a mega castle, with ziplines and bounce pads sending your tiny avatars rocketing between towers. As you expand, Grounded takes on a 7 Days to Die approach, with spiders and other nasties purposefully marching closer to your base to launch attacks. It’s not as predictable, so you can’t count down the time until an assault begins, but it’s coming. The first time you see a cluster of Orb Weavers charging towards your home is terrifying if you’re unprepared, so take this as a warning. Build defenses, upgrade your weapons, and get ready for a fight.

Over the past two years, Grounded has cemented itself as one of the best survival games around, with a gorgeous world that’s teeming with life. That puts you in great danger, as the massive insects stomping around pose a rather substantial threat, but surviving their attacks and scavenging for materials is a fruitful endeavor. As you make your way through Grounded’s biomes, swimming to the depths of the Koi Pond or escaping infected bugs in The Haze, you’ll uncover new items that push you even further into this mystery and give survival a purpose. Even if you’d rather sit around and focus on making a cozy home, Grounded’s reactive world means that it won’t be long until the creepiest crawlies come knocking. It really does feel like you’re just surviving in their world, and doing so is a constantly rewarding experience that I adore.