Soulstice – Test: Although Devil May Cry was the inspiration, this game just doesn’t want to ignite 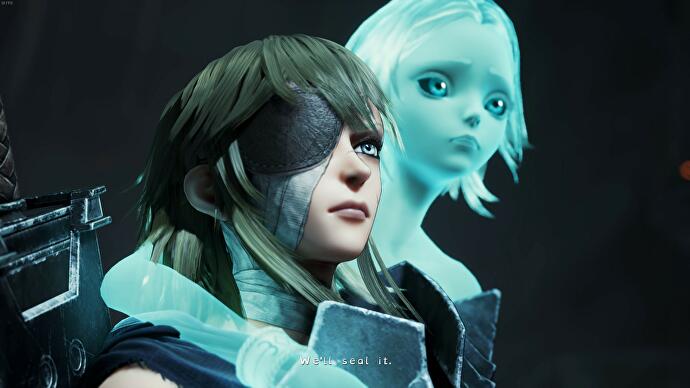 Too bad: Because the combat system is immature and the camera work is often terrible, a few good ideas go unnoticed.

And I had previously referred to Soulstice as Soulslike. It has nothing in common with the supposed namesakes. In Soulstice, too, you fight against nasty creatures in a world threatened with extinction, but the focus is not on the seemingly impossible challenge, but rather on quick chopping and cleverly combining different skills.

And how magnificent it sometimes looks to roam the walls of a city threatened by a great darkness! Dipped in blue gray and traversed by wafts of fog, old stones and wooden structures stretch out while Briar is on the way to the next fight.

The heroine was reborn as a so-called chimera – together with her sister Lute, who accompanies her as a ghostly apparition. What exactly the story of the chimeras and the two sisters is, you will learn in the course of their adventure, which is why I don’t want to anticipate that. In any case, I find the dark fantasy very appealing, even if it is mostly told through boring click-through dialogues and a few, similarly unspectacular film scenes.

The linchpin is of course the combat system, because even if you discover small hiding places where you can get currency to buy new weapons and skills, Briar usually swings her blade and various secondary weapons to defend herself against groups of opponents. Light and heavy attacks, dodge step, combos with sometimes delayed inputs… you know it.

What is special about Soulstice are all the skills associated with Lute, as the subtle sister also attacks, albeit independently and with much less effect. However, it is all the more important to block an attack, which you can command her to do by pressing a button as soon as an enemy attacks. What’s more, it can generate two energy fields, one in each of two, to make otherwise invulnerable creatures vulnerable at all. This reminds me above all of Ninja Theory’s DmC: Devil May Cry, in which you also have to modify Dante’s moves towards certain enemies, which is also represented by the colors red and blue, like in Soulstice.

But this is exactly where the first weaknesses of the system, as used by the imitator, become apparent. Because while you dynamically integrate the alternative attacks into the combos in DmC, you just switch constantly here without anything else changing. The result: The whole thing lacks the presence and coolness that it has in the model – which would be bearable if the combat system didn’t crumble in other places.

You also have to be careful that Lute doesn’t run out of energy because then she wouldn’t be available for a few seconds. So if you don’t succeed in constantly renewing your “battery” through certain actions, you have to switch off the energy fields again. And what sounds reasonable on paper unfortunately distracts me so much from the actual fight in the game that I find it annoying.

It’s far from the end at this point. Also, Lute’s mentioned counter is only a good thing in theory. Why? Because it overlaps with the dodge step. After all, you have two defensive systems that you only have to execute almost, but not exactly at the same time, so that they are as effective as possible. In connection with the previously mentioned switching, this is simply too much when it should actually be about the (preferably tough!) stringing together of cool moves.

To make matters worse, these efforts are not even rewarded with sufficiently cool promotions. Briar has a few fancy slow motion shots and special attacks up her sleeve if you cause a lot of damage with her and Lute within a short time without being hit – that’s why you can’t do without her sister’s actions. All in all, the type and number of their combos is too meager for a spectacle of this type.

And then finally the lack of an overview throws a spanner in the works. On the one hand, the camera turns away from the action in tight spaces or when the area is once again bordered by a “glass bell” or clutters around twitching, while in some fights you are not allowed to move it at all. Both are frustrating in view of the usually quite large number of enemy creatures and only multiply the circumstances mentioned.

Second, she’s generally fixated on peaceful exploration, as if Soulstice were geared towards the first installments of Devil May Cry rather than modern action. I find that terrible! Because if you can’t make a jump because you can’t see Briar’s position in relation to a platform, it doesn’t exactly add to the fun of botched discovery.

It also doesn’t help that you’re always dealing with what feels like the same set of enemies; Soulstice is by no means as sophisticated as it would like, and as it needs to be, to be a convincing Devil May Cry-branded action game. This is all the more unfortunate since the scenario and story definitely arouse my interest. But in connection with the optionally rigid or uncomfortably stubborn camera, the overly cerebral combat system, which is also disappointingly monotonous when it comes to combos, is simply not strong enough to captivate me. In any case, I rarely switch from the highest to a lower difficulty level, but here I did exactly that – not because the game was too difficult for me. It’s because I just didn’t feel like it anymore.