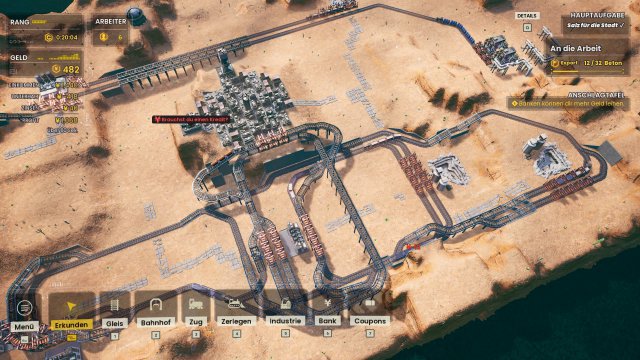 Logistics in the space colony

Railgrade is a bit reminiscent of Transport Fever in miniature: Instead of connecting dozens of cities with everything that can transport goods or people in an endless game on gigantic maps, Railgrade mostly takes place on small, manageable diorama sections. In most cases, it’s about solving a specific problem, exporting one or more special goods in fixed quantities, or stimulating a city to grow. For the best rating, it has to be done quickly – so Railgrade is definitely not a game for slow and beautiful builders, but rather for efficiency professionals with an absolute penchant for complete optimization.

Train stations can be designed to be pleasantly complex and multi-storey.

Otherwise, the economic simulation debut by the Japanese from Minakata Dynamics plays like a classic construction title in the style of the legendary Railroad Tycoon: From a bird’s eye view, tracks must first be laid and stations placed so that trains with the right locomotive and wagons can run between them . These initially transport simple goods such as water or energy generated from oil, before gradually becoming more complex goods that require two or more raw materials for production. The track construction is easy to do and thanks to the clear alignment with the grid and limited functions, it is much less bitchy than, for example, in Transport Fever. Nevertheless, the automatic suggestions are by no means always the best – and on the PC, the use of hotkeys for the height of bridges and overpasses is mandatory.

See also  How much money have you spent on your current PC accessories?

Reduced to the essentials 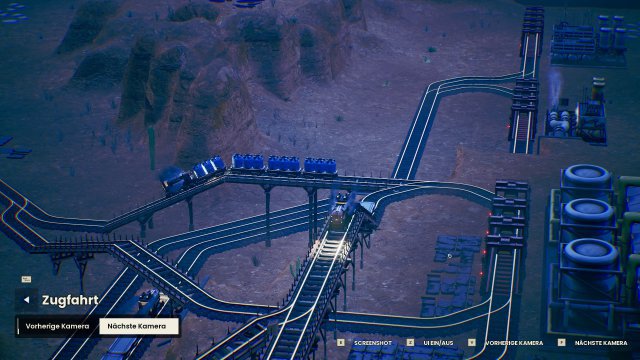 All trains are gray at night: The backdrop of Railgrade creates quite atmospheric moments.

Cities provide important workers for the industries and grow as more goods are delivered. The demand for more and more complex goods increases with each level, so that your own goods network also becomes more and more complex. The processing industry and raw material production can be placed and upgraded with the appropriate deposits. I get upgrade licenses in the in-game store for coupons that are given upon successful completion of missions. There is also a bank where I can not only borrow money but also store excess cash. This generates passive income – and is a nice mechanic that would also look good in many other building titles. Overall, Railgrade is pretty easy though. Money problems only arise if you make really big plans and can usually be solved with a little patience.

Overall, Railgrade’s logistics are reduced to the essentials: Trains transport their goods from A to B. I can’t specify an exact quantity, for example if several recipients are selected one after the other. Also, goods cannot be temporarily stored or handed over at the stations, which are simply clicked on the tracks, as is the case with Transport Fever – there always has to be a company within reach in order to be able to place wagons for the respective load at all. There are also no signals: trains slowly “ghost” through each other, which leads to massive loss of time on the route. 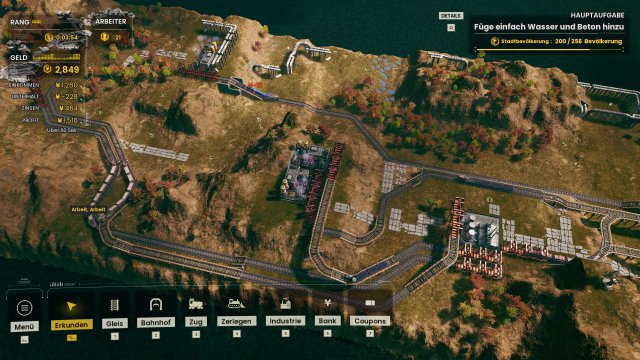 There are four different biomes – from the ice desert to the green grassland.

So I have to create multi-track individual lines or circular routes in order to move as many goods as possible at the same time. Switches are initially set manually for each train individually in order to define routes for individual sets. Later, they can also be set to “variable” so that trains run into free tracks. This always enables beautifully complex stations, whose tracks can also be layered on top of each other here. This saves space and even looks very chic in the seemingly diesel-punk world. By the way, the colony was built across different biomes ranging from lush green to snow desert.

Railgrade also cuts a fine figure on the Switch – the controls are well-matched to the input options of Nintendo’s hybrid console, although I personally will always prefer the precision of a mouse and keyboard in this type of game. The short inserts are also perfect for longer bus and train journeys, but sometimes I would definitely have wished for an active pause function here so that I could plan my rail network in peace. However, the operation could be a bit more optimized, especially on the PC. The selection bar at the bottom of the screen is exactly the same on both platforms – and what works very well on the console is just way too big on the PC monitor. This is how you get confused very quickly – there would definitely have been better solutions.