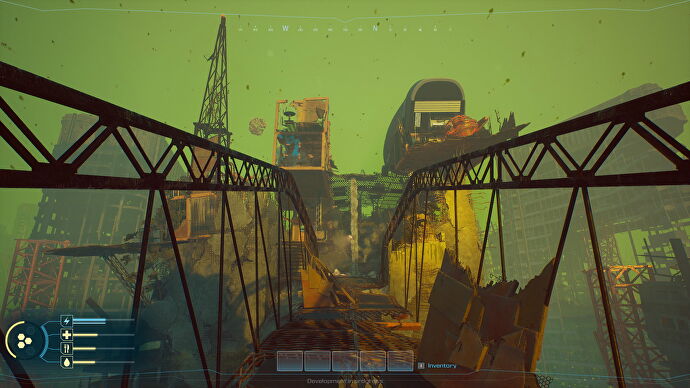 Somewhere at the edges of the galaxy in No Man’s Sky lay a large, verdant planet with an abandoned, but functioning, starter ship on it. I left it there in 2016 after discovering a larger ship out in the wilds, but it’s a decision that still haunts me to this very day. You see, I was so taken with my new set of wings that I failed to notice it didn’t have a functioning hyperdrive attached, which is needed to punch through the atmosphere to visit another solar system. It also turned out that this particular planet didn’t have any of the necessary resources to craft a new one either, leaving my only form of escape back in my tiny little starter ship – which, of course, was now nowhere to be seen. I spent hours looking for that little ship, but the planet was so vast that I never saw it again.

Upcoming aerial survival game Forever Skies doesn’t have lots of large planets to lose your only means of transportation in, thankfully. In its Steam Next Fest demo at least, the only things I was able to land my makeshift aircraft on were tiny, rusty platforms perched atop decaying skyscrapers on an Earth ruined by disease and an ecological apocalypse. But that fear of getting stranded somewhere I shouldn’t be has never left me, and I’d be lying if I said I wasn’t just a teensy bit scared of jumping down from my ship and finding I wasn’t able to get back up to it again.

I needn’t have been so cautious, really. Despite one landing attempt throwing up all sorts of alarms and warning signals, once you touchdown fully, your ship is anchored in place, leaving you free to roam and scavenge for resources as you please. These might be metallic or synthetic scraps – which you can stick in your fabricator later on to craft more complex bits of equipment for your ship – or you might be lucky enough to find some rogue sun melons growing in a patch of dirt to help you keep your hunger levels topped up.

You’ll also need to manage your thirst levels in Forever Skies, and while these little outcrops in the clouds will occasionally contain rather suspect cans of ‘old water’, you can collect dirty rainwater pooling in rusty satellite dishes as long as you’ve got an empty bottle to hand. Of course, you won’t want to drink this literal dishwater straight. That won’t do much for your health at all. But you can plug it into your ship’s water purifier to turn it into something drinkable once you’re on your way again.

Really, though, every landing on one of these crumbling towers will have you hoping for one thing: batteries. Despite their tiny size, these big ticket items are the fuel you’ll need to craft some of Forever Skies more ambitious ship units, such as a turbine for flying up above the dust that ravages the land below. The timed Next Fest demo sadly came to an end before I was able to see just what lofty delights I was able to reach with my new turbine, but the wide open sandbox that developers Far From Home have created here has certainly piqued my interest.

It looks stunning, for starters. Its green haze and enormous tumbleweeds of harvestable materials floating in the wind create an evocative atmosphere when you’re trundling along in your little airship. The ever-changing weather made me feel lonely and vulnerable, like I really didn’t want to biff this up being the last surviving human and everything. Before I’d set off, I’d found the dessicated husks of some former researchers I’d been trying to make contact with on returning to this forsaken planet, and man, I bet that’s what my No Man’s Sky astronaut looks like now, I absolutely guarantee it.

The thing I’m most interested to see, though, is just how effectively developers Far From Home will be able to plot the game’s story across its large open world. For the most part, a large part of its early backstory was delivered via data cards and electronic logs during the demo, although early on I also had to use a battery to power up a laptop as well. It was a lot of reading, though, and mostly set the scene for what was already pretty obvious – that Earth has been devastated by an unknown virus, and an ecological disaster has ruined the surface below. Still, the trailer that plays at the end of the demo certainly made it seem like there was going to be a decent mystery to unravel over the course of the game, so I’m hoping the sandbox nature of the world will make it easy to follow. My only worry is that I will indeed biff things up so royally that I won’t be able to find Forever Skies’ little story crumbs on my travels, and that I’ll inevitably No Man’s Sky it at some point and be unable to continue . Fingers crossed I’ll fare a bit better this time.

Fortunately, we shouldn’t have to wait too long to find out, as Forever Skies is due to launch into early access before the end of the year, with about 30 hours worth of survival-ing to dig into, according to its Steam page . The current Next hard demo is just a single-player affair for now, but the developers have also said they’re hoping to add four-player co-op during its early access phase as well, which is something I’m definitely looking forward to. If I do end up getting stranded on a skyscraper somewhere, here’s hoping it will be a bit less lonely when I’ve got a pal to enjoy the silence with.