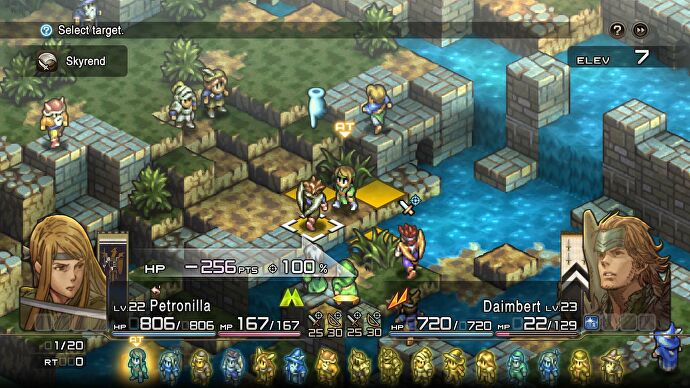 Say what you will about Square Enix’s ill-fated ventures into NFTs and mildly embarrassing follies with live service games recently. Their commitment to remaking, remastering and generally sprucing up their aging back catalog from decades past is an admirable one in my eyes, even if they are making you pay through the nose for them almost every single time. As we all know, though, some have made more successful transitions than others. The dream, of course, at least for me, is the Final Fantasy VII Remake approach for literally everything, no matter how unfeasible, impractical or physically impossible that would be for Squeenix’s enormous game library. Alas, the reality is often a lot more modest. Best case scenario: you’re a 90s SNES game getting a lovely HD-2D makeover like Live A Live. Next on the rung: some added 3D zhuzh a la Final Fantasy VIII Remastered (although even that was by no means perfect).

Mostly, though, it’s your Final Fantasy Pixel Remaster treatment. A welcome update that maintains the look of the originals (albeit with some questionable font choices), but that’s more or less your lot. Tactics Ogre: Reborn, a remaster of the 2010 PSP remake of the 1995 SNES original, falls squarely into the latter camp, but you know what? That’s fine. It’s still a rollicking turn-based tactics game all these years later, and one that definitely deserves to be freed from the shackles of Sony’s long-dead handheld, where it’s lain dormant for the better part of a decade. Besides, I’ll take a fully re-orchestrated soundtrack over slightly fancier pixels any day of the week. you know me

A fresh (and, can I say, ultra lush) soundtrack isn’t the only new addition to Reborn, though. It’s also been fully voiced in both English and Japanese, its pixel art and character portraits have been touched up for higher resolutions, and there have been some minor tweaks made to its grid-based battle system, more on which in a second. For the most part, though, this is Tactics Ogre as it was on the PSP back in 2010. That might sound rich coming from someone who’s never owned either of Sony’s handhelds (or had the good fortune to live in a country where Tactics Ogre came out originally), but when you sit it next to a game like Triangle Strategy, freshly ported to PC from the Nintendo Switch in all its HD-2D glory just a few weeks ago, and published by Square Enix no less, you can definitely feel its age more than most.

It’s the little things that make you notice the creaks – like only having two viewpoints to the game’s camera: isometric or fiercely top-down, the latter flattening the height of its varied terrains and making it increasingly hard to judge both the effective range of your attacks and those of your opponents. HP bars are also turned off by default, and friendly, AI-controlled guest characters all seem to have the same death wish, ploughing headlong into the frontlines with little regard for themselves or your own troops. You can only see an enemy’s attack range by selecting them with your mouse cursor, too, something that’s impossible to do while you’re trying to set up the actions of your individual units. As a result, you’re never quite sure whether you’re moving your wounded to safety or have accidentally left them in the firing line of an errant archer.

See also  Diablo Immortal: These servers are available at launch

Even when you’re away from battle, you’re only able to shop and replenish your item stocks at specific locations, leading to being on the back foot a lot of the time if you’ve had a particularly hard battle beforehand. Similarly, while you have the option to hire additional party members to bulk out our army should one of them fall permanently in battle, you’re also forced to train them up from Lv. 1, resulting in additional grinding via training missions on top of an already lengthy and challenging campaign. In isolation, these things would all seem quite small, but taken together and you can definitely start to see the mold setting in on its 27-year-old tiles.

Approach Tactics Ogre: Reborn with the right mindset, however – one that appreciates its historical quirks for the challenges they bring rather than the crusty restrictions they impose on players – and these defects of age can be smoothed over for some big rewards. It won’t ever have the same youthful sheen as Triangle Strategy, perhaps, but its chunky pixel art is still pleasingly detailed, and its bright, vibrant color palette is infinitely more appealing to the eye than the usual mulch-coloured battlefields we get in this genre. It’s certainly not lacking in combat scenarios either, moving you from one tightly designed skirmish to the next with the fleet-footed precision of a procession march.

There’s a wide and varied spread of character classes to get stuck into, from your classic warriors to healing knights, magical, spear-wielding rune fencers, berserkers and winged archers, and some characters can even recruit fairies and reptilian beasts. Unlike the PSP remake, however, that new combat wrinkle I mentioned earlier means you’re no longer leveling up certain classes. Rather, you now have control over each individual character, with their level staying the same even if you switch class – a welcome concession for encouraging experimentation, if you can handle all the intense menu management that comes with kitting them out with all new gear, spells, items and finishing moves afterwards, of course.

Still, while you do spend a lot of time rummaging around in its Unit menu screens (even without switching classes), Tactics Ogre does at least do you the courtesy of getting to the action nice and almost once you select a mission, keeping any story preamble brief and to the point. Some battlegrounds do get repeat visits during the course of the story, but for the most part its locations are similarly diverse, with large, open, swampy plains following claustrophobic city streets, upward hill battles, icy mountains, narrow waterways and fiercely defended fortresses to name just a few. Wherever you are in Tactics Ogre, though, terrain height is a key consideration, affecting everything from movement and attack ranges to whether you even have a clear line of sight to your target. Combined with its underlying weather and elemental systems that also affect the potency and accuracy of your attacks, each battlefield becomes its own kind of puzzle to turn to your advantage.

This is especially true once it starts throwing randomized stat buff cards into the mix as well. These appear all over the map during battle, and can be grabbed by both you and your opponent. Blue ones only last the length of the mission, with a maximum of four being assigned to any one character, but rarer green ones are permanent. This can result in some truly spiteful maneuvering on your part, making a beeline for certain stat boosts just to pip oncoming enemies to the post, for example, but it can also mean you’re actively throwing units into danger a lot of the time, and resolving this ongoing tension in your head is one of Tactics Ogre’s greatest strengths. It’s very moreish, and makes you eager to see what it’s going to throw at you next.

Admittedly, its many warlords, mercenaries and competing factions can all blur together at times, reminding me of the same messy soup of political back-stabbing that plagued my enjoyment of The DioField Chronicle earlier in the year. I think this is partly because most missions task you with simply “vanquishing the enemy leader” in order to secure a victory, who are named, but otherwise fleeting characters you’ll rarely ever see again. They’re all given seemingly equal billing with the Dukes, Knights and Sers you’re working for in the background, and as such it can be hard to get a sense of how all these disparate groups fit together during a single playthrough. At its worst, it just feels like an endless conveyor belt of battle after battle.

Part of the magic of Tactics Ogre, though, comes from its central tarot system – a neat time-travel mechanic that not only lets you rewind the flow of battle a limited number of turns if you accidentally biff a move in the middle of battle, for example, but upon the game’s completion also lets you revisit key moments in the wider plot to choose an alternate path and make different decisions. It’s not strictly necessary to see the game’s ‘true ending’ or anything, and with single campaign runs lasting upwards of 40-50 hours, you’ll also need to put in a heck of a lot of work to actually get there in the first place. But seeing alliances flipped and mirrored like this, with former party members allies in one timeline and mortal enemies in the next, remains a powerful hook in Tactics Ogre: Reborn, lending it not only a sense of wistfulness for the might haves and could have beens in these characters’ lives, but also a broader stage for its overarching tragedies to play out on.

Branching storylines are nothing new, of course, but I’d argue they’re still a relative rarity in the strategy genre as a whole, even now. Heck, I can only really think of Fire Emblem and its Pokemon starter-style approach to medieval warfare that’s even come close to capturing the same idea of ​​playing with different sides of history like this in recent years (answers on a postcard in the comments please if you have any other good suggestions!), and with that series firmly locked up tight in the Nintendo vault, Tactics Ogre: Reborn is possibly the closest PC players have come to having a tactics RPG with the same level of scale and ambition in quite some time

So yes, there are flaws and niggles that come with it being almost 30 years old, but Tactics Ogre: Reborn remains one of the great strategy classics for good reason – and to finally see it come to PC and other modern platforms where everyone can enjoy its densely plotted tactical machinations is well worth celebrating. In another timeline, maybe, we might have seen this receive a more luscious HD-2D makeover (the game’s ‘Lawful’ route, perhaps), but as it stands, this thoroughly ‘Neutral’ remaster still has plenty to admire and sink your teeth into – particularly if you’re planning to play it on Steam Deck, where it works surprisingly well (bar a few touchscreen annoyances on the main map screen), despite not being fully verified yet. It might be a very safe kind of Square Enix remaster, but if there’s one small victory we can claim against the ‘Chaos’ lords timeline, it’s that there’s not a single questionable font choice in sight. result.