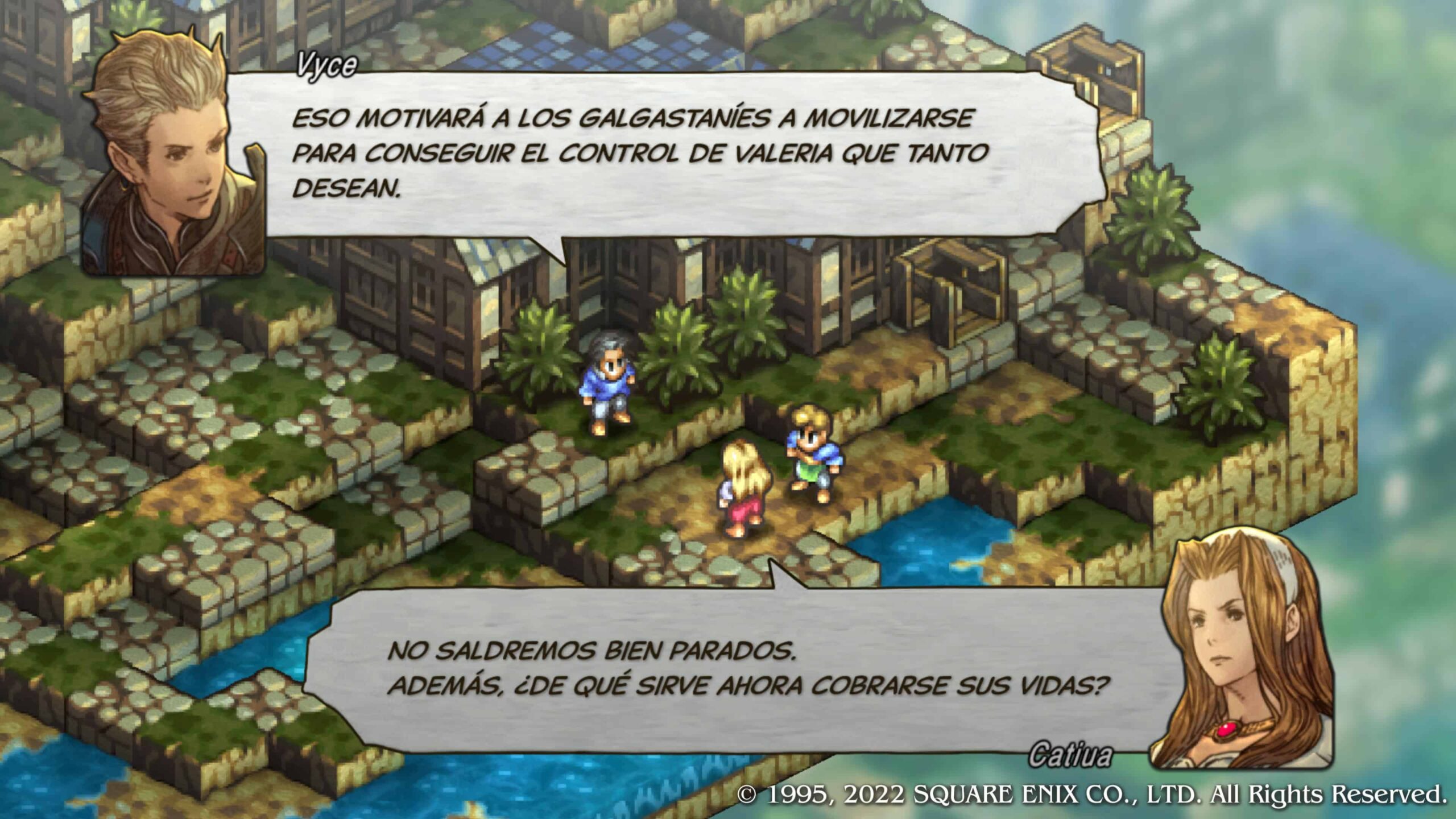 Among the many games you have Square Enix in his catalogue, he had heard a lot about the tactical RPG series, Tactics Ogre. I had a close up with the GameBoy Advance game with Tactics Ogre: The Knight of Lodis, considered by the sovereign as one of the best in the series, but I barely played more than an hour because my interests were other. However, I was always open to playing anything, and I can only comment on one thing: what I have missed.

We had the opportunity to play in advance Tactics Ogre Reborn, the remaster for current consoles Tactics Ogre: Let Us Cling Together of PSP. The latter is in turn an improved version of the 1995 SNES classic. It comes with a number of improvements, quality of life options and fully dubbed dialogue, something the original didn’t have.

Despite the general appearance of the game, with characters in plan deformed, It has a very mature, complex and dark story. It covers political issues in which things do not always lead us on the right track. We will see situations in which the characters will be involved, which makes them question their morality. All this seasoned with a plot of intrigues and betrayals, almost like a Game of Thrones.

the plot of Tactics Ogre: Reborn takes us to a group of islands called Valeria, set in a world known as Xytegiana. Here there is a war conflict between some nations and different races that populate said world, these are: Walisteos, Galgastaníes, Bakramitas and Xenobios. In the middle of it all is a group made up of denam, his sister Catiua and the impulsive vyce, who are the main characters.

Denam and company must embark on a personal war in search of revenge. For reasons that I will not reveal, we must form an army in order to make a name for ourselves among these nations and incidentally survive a war that knocks on their doors. The plot offers many ramifications that depend on certain decisions that we will make throughout the adventure, which translates into several endings with their different points of view.

Tactics Ogre’s battle system was one of the most influential in its genre, from which other games such as Final Fantasy Tactics and more recently, TriangleStrategy. Here we have maps with a variable amount of squares, in which characters from the allied and enemy sides will participate through turns. Depending on a number of variables such as level, class, and equipment, each unit will have a different amount of movement, action, and range slots.

Through a world map in which as we advance in the plot we will unlock settlements, some of which are alternate missions. This map has a huge extension but we can move around it easily. Here, we can choose if we want to continue with the main story, train our units, do alternative missions, read relevant information about the game and engage in combat.

Within the confrontations, in each turn, the characters can perform various actions such as moving, attacking, using objects and abilities, and it is up to us how to face each confrontation. The enemies will not make things easy and on many occasions we will have to repeat the combat, but this is part of what makes this series special. A single confrontation can take several minutes, due to the nature of the game, so we must be patient.

In addition to the battles, the game allows the characters to have interactions through dialogues, which expand the information that we will collect and thus get to know the NPCs and allies even more. We will spend a good part of the time reading conversations, but luckily they are translated into Spanish, enlivened with the voices of the characters.

Respect for the classic

Something that fans of the series will love is the fact that many of its classic mechanics were largely respected. However, some improvements to make the fights more bearable were necessary. We have automatic saving, the aforementioned system of level by units, maximum level limit according to the level of our group to be OP.

We have a customization component for our troops in which we can choose, from the class of any character to what skills it will have. When leveling up a unit, we will gain battle points and this allows us to assign a set of special abilities, up to a total of 4, the same in the case of magic if the character makes use of it. This allows two units of the same class to have different abilities to have more variety of action, and forces you to think carefully about which ones are better on the battlefield.

There is what they call the system of The car, which is practically rewinding the turns if we make a mistake, thus making the game a little easier. The one who is veteran, can ignore this option, but it is useful when we make an unwanted movement. In principle, the number of turns to rewind will depend on the battlefield, but it is around 50 turns.

Obviously, Tactics Ogre Reborn could not be a port that jumps from one console to another without further ado. A number of improvements have been included to bring the game up to date with modern player preferences. In addition to the graphic adjustments, such as adaptation to the 16:9 screen size, reduced load times, better color palette, we have other very important ones.

The changes include the addition of voices to conversations, something that gives the game a lot of personality by bringing character interactions to life. Another option is an old reliable one, as an option to increase the speed to X2, although it really makes little difference as we could see. Inclusion of AI patterns so that our units act on their own, if we wish.

Another very useful option is leveling up by units, that is, each member of the group will level up regardless of their class change. Substitution of random fights for training operations, with this we can train our troops to level up.

The option settings allow for mouse and keyboard use for those used to this style of play. We can even assign the functions of each key, the sensitivity and even the size of the cursor. I was able to test these options on PS5, and they are so simple that it makes you want to put the DualSense to rest.

Tactics Ogre: Reborn, as we already mentioned, has graphic and technical improvements that the original version did not have. At a general level, the game is seen in HD with the 16:9 screen configuration, all the illustrations were improved, looking much clearer. The characters have a smoothing filter, as do the scenarios, something that seems right to me, however, that feeling of Pixel-Art that the first games enjoyed is lost a bit, but that is a matter of personal taste.

About the soundtrack, we can not have any complaints. The direction is in charge of Hitoshi Sakimoto and Masaharu Iwata, giving us some very nice epic pieces. The sound has been improved compared to the original version, and new parts have been included. For the first time, the game is dubbed in English and Japanese, with a good job of acting from the actors. It has texts translated into Spanish, something that the PSP launch did not have and that alienated many players, since it is a game that we will constantly be reading.

Tactics Ogre: Reborn is one of those necessary remasters that brings back a classic among tactical role-playing classics. It has a series of improvements to adapt to current consoles that fans will appreciate, including technical adjustments such as adaptation to HD screens, better sound quality, inclusion of voices in conversations, among other settings. It has a complex story and characters, an interesting gameplay, a quality orchestral soundtrack. Highly recommended for lovers of the genre who will see in it a timeless jewel.

Note: This review was done on the PS5 version and the code was provided thanks to Square Enix.