Twitch streamer breaks her back in PR action – Must hear it’s her own fault: “I’m the victim” 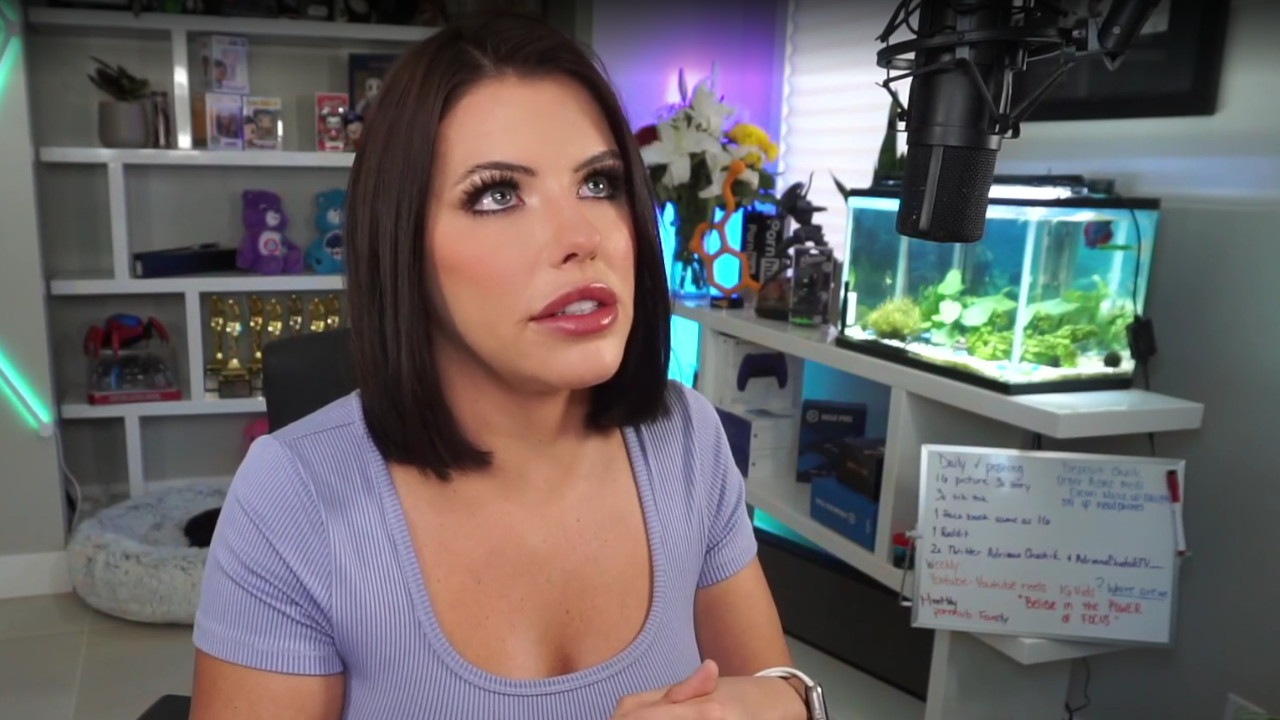 Streamer Adriana Chechik (30) met at TwitchCon in San Diego on October 9th. fractured her back in two places while jumping into a foam pit from a Lenovo Legion PR attraction. She has been back on Twitch since the end of October, and now she has given her viewers an update on her health.

What was that accident at TwitchCon?

Since returning to Twitch, Chechik has been hosting more frequent streams that tend to be shorter. Now she brought her viewers up to date, defended herself against allegations – and showed her physiotherapy in the stream.

“I’m just getting tired of that”

What is the current status? In a Nov. 7 stream, Chechik enlightened her viewers about her current condition. She showed the rather unembellished reality after a serious injury: Chechik showed up in her orthopedic corset and jogging pants, took a short break to do some physiotherapy.

Bracing one hand against the wall, Chechik turned to her viewers and explained, “I’m tired of this. It’s just that, I’m just getting tired of it already.”

How is Chechik? About 15 minutes into the stream, Chechik revealed that she had numbness in her right leg. Apparently she will have to undergo further surgeries, an appointment with her neurosurgeon in LA is scheduled for later this week.

How is Chechik’s streaming comeback going? Many viewers are impressed by Chechik’s bravery and wish her a speedy recovery. Journalist Jake Lucky also shared footage from her stream and wrote that you have to admire the “Grind”.

But not all reactions are so positive: There are also derogatory comments on Twitter that do not want to recognize “sitting in his chair” as an achievement, accusing Chechik of exploiting her accident for attention.

Some viewers of the streamer also seem to think that they are at least partly to blame for their accident. When asked why she hadn’t noticed that the pit wasn’t adequately secured, Chechik responded with an analogy:

According to Chechik, she only found out afterwards that other participants had also been injured.

How was I supposed to know that I would be the one to break my back after watching a group of people do the same thing. Without knowing that two people had been injured the day before. So don’t blame me, because I’m the victim here. Or? I was at an event and the last thing I thought was, “Hey, this pit isn’t built properly.” No! I said, “Hey, I’m ready to go find my girlfriend and push her off this platform.” That’s all I thought. I didn’t think beyond that.

What does Asmonold say? Chechik receives support not only from her fans, but also from some other influencers. The well-known MMORPG streamer Asmongold had already reacted to the revelation of her pregnancy a few days ago.

His first reaction was a shocked exclamation: “This is just bloody awful.” The streamer thinks it’s unfair to blame Chechik for the situation:

I don’t think it’s fair to criticize someone for doing or not doing something…she wouldn’t have hurt herself if it wasn’t for gross negligence…of course people can be extra careful, but is it really hers Blame them for not being extra careful? It’s her fault [die der Veranstalter]for not following safety protocol.

Asmongold also has a guess as to why people are trying to blame Chechik for her accident: those people probably wouldn’t like her given her past as an adult performer, according to the streamer.

For Asmongold, the case is apparently very clear: “As I said, I think she should sue Twitch.” This advice can also be found in numerous comments on the subject.

It is not yet known what legal steps Adriana Chechik will take or has already taken.