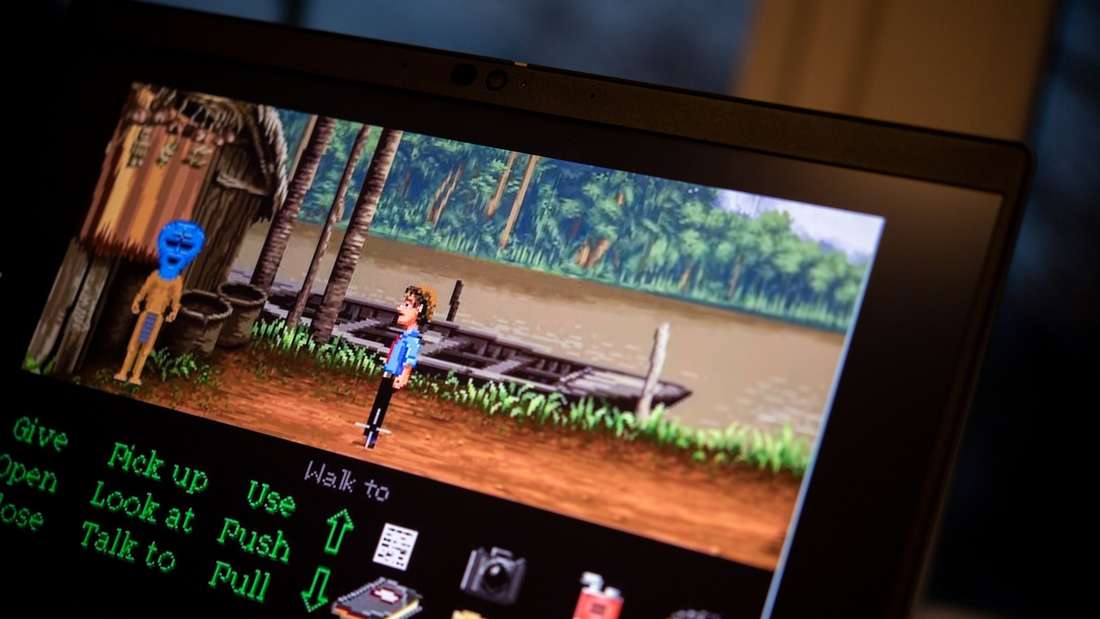 Clever puzzles, exciting story and lots of humor. That’s the recipe for success of the point-and-click adventures that are making a comeback with the hit “Return to Monkey Island”.

“The Secret of Monkey Island” or “The Day of the Tentacle” still make the fans click their tongues today. We present 5 point-and-click adventures that will stand the test of time.

1. “Zak McKracken and the Alien Mindbenders”

“Frustrated tabloid reporter saves humanity from murderous aliens”. That headline sums up “Zak McKracken and the Alien Mindbenders” aptly. What was still the stuff of cheap science fiction films in the 1950s became a computer game classic in the hands of LucasArts. The riddle of the pyramids, Stonehenge or the myth of Atlantis are only part of the weird story.

Chief designer David Fox created a colorful mix of conspiracy myths and offbeat humor. Hero Zak was already the ancestor of the would-be pirate Guybrush Threepwood from “Monkey Island”: sweet but messy. The game design was typically point-and-click: collect and combine items. The level of difficulty appealed to both beginners and pros. However, players could also end up in a dead end that required a restart of the save game.

“Zak McKracken and The Alien Mindbenders” is now a cult classic that, alongside “Maniac Mansion” or “The Secret of Monkey Island”, is representative of the heyday of LucasArts adventures. Fans loved it so much that it even released some semi-professional sequels like 2008’s ‘Zak McKracken – Between Space and Time’.

Worth playing because: A throwback trip to the glory days of point-and-click adventure. The quirky story with its numerous pop-cultural references will still make gamers smile today.

Would you like something heartier? Leisure Suit Larry: Wet Dreams Don’t Dry is the stylish sequel to the infamous point-and-click classic Leisure Suit Larry. This time the sequel comes from the German development studio Crazy Bunch, but like the original it relies on ambiguous jokes about the adventures of the wannabe playboy Larry. As in the 80s, the developer studio enjoys parodying sex and gender clichés.

This time, Larry lands in our brave new social media world via time warp. He rummages through run-down toilets, takes on a high-tech company and ends up on a remote island to save the world. In the game, Larry has to combine objects to solve small puzzles. But be careful: not every joke is right, not every riddle is in good taste, but relies on rough punch lines.

Like its predecessors, “Leisure Suit Larry: Wet Dreams Don’t Dry” is a playfully undemanding, but funny adventure of a rough kind. It didn’t paralyze entire offices like the original, but it was enough for a sequel. “Wet Dreams Dry Twice” picks up where the predecessor left off and lets the fans sigh with joy.

Worth playing because: “Leisure Suit Larry: Wet Dreams Don’t Dry” is the stylish sequel to the 80’s classic. For everyone who thinks “Return to Monkey Island” is too stuffy.

Jan Müller-Michaelis is Germany’s guru and point-and-click developer. Before he won some awards with the “Deponia” series, he started his career with “Edna Breaks Out”. Based on his thesis, the game tells the story of the title character who tries to break out of a sanatorium.

Dark childhood memories, devious doctors and a cuddly toy named Harvey – from these ingredients “Poki”, as Michaelis is called by his numerous fans, created an exciting psychological thriller. Heroine Edna explores a mental hospital in search of the truth about a secret from her childhood.

Numerous objects must be found and combined. In keeping with the location, the boundaries between reality and dreams become blurred: Edna not only gets advice from her cuddly toy, but can also talk to some objects.

“Edna Breaks Out” was followed a few years later by the no less weird sequel “Harvey’s New Eyes”. There is a new adventure with a new heroine, but also a reunion with the characters from the first part. In addition to the exciting story, the hand-drawn scenery and the extensive voice output form the successful concept of this point-and-click adventure made in Germany.

Worth playing because: Exciting, quirky, and tricky, Edna Breaks Out is a must-buy for any point-and-click fanatic.

Edna Breaks Out, Daedalic for Windows, macOS, Linux. USK from 12

Legendary developer Ron Gilbert returns from early retirement with “Thimbleweed Park”. After a successful Kickstarter campaign, the creator of the world-famous “Monkey Island” series tells the story of two FBI agents who have to solve a murder with his new studio Terrible Toybox. Retro fans in particular can look forward to a nostalgic journey back to their youth in this pixel art-style point-and-click adventure.

From a mix of “Twin Peaks”, “Twilight Zone” and a touch of Stephen King, Gilbert and his team create an exciting and funny mystery satire. Different main characters make solving the puzzles a little more complicated. Ultimately, however, it all boils down to the usual combining of different objects.

Similar to early LucasArts adventures such as “Zak McKracken” or “The Secret of Monkey Island”, players must first select action commands such as “Open” or “Talk” in a column in order to interact with the game world. Retro fans are delighted, but it might be too cumbersome for genre newcomers.

See also  Problems with the PS Plus app: Several titles are unplayable on the PC

Ron Gilbert proves with “Thimbleweed Park” that he hasn’t forgotten anything. Tricky puzzles, funny dialogues and the weird story will inspire old and new fans. Visually and in terms of content, it is a charming journey into the gaming past. The successful premiere was followed in 2022 by the enormously successful “Return to Monkey Island”, in which Gilbert returns to the scene of his greatest success with Terrible Toybox.

Worth playing because: Old but good. The point-and-click adventure “Thimbleweed Park” provides hours of fun for old and new fans with tricky puzzles, weird characters and a stylish retro feeling.

Out of nowhere, the science fiction adventure “Norco” conquers the hearts of point-and-click fans. In search of her brother, the main character explores the ruins and dangerous swamps of Louisiana in the near future. Featuring a malfunctioning security droid fleeing an unknown threat, wacky bayou pirates and a stuffed monkey.

Norco is a gothic-noir styled point-and-click adventure. Despite the sometimes bizarre characters, there is little to laugh about here. Instead, players go through a menacing and surreal Southern scenario. The story quickly revolves around existential questions about the meaning of life or the dangers of technology in an increasingly extinct nature.

“Norco” is the top-rated point-and-click adventure of 2022 on the website Metacritic, a collection of worldwide video game reviews. A short but intense adventure for players who would like to try a video game with a difference.

Worth playing because: Deep and intense. The surprise hit “Norco” ensures lasting impressions.