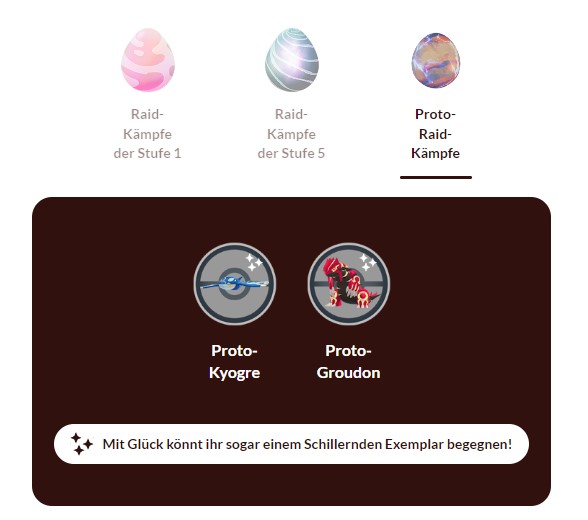 When Pokemon GO announced the 2023 Hoenn Tour, two Pokemon weren’t marked as Shiny. Coaches were angry and disappointed about it. The announcement has now been updated.

What is this event? On November 29th, Niantic officially announced the Hoenn Tour in Pokémon GO. It starts in February and is divided into two events: one on site in Las Vegas (USA) and the following weekend a worldwide event for all players.

This is now the third tour of this kind. In 2021 the Kanto Tour ran, this year the Johto Tour ran. Highlights of these events are shinys that appear in the game.

What was the problem? When announcing the Hoenn tour, the Niantic team also presented the spawns and raids. As you know, Pokémon that can be caught as shiny are marked with the shiny stars in the official graphic.

The lack of markings on Groudon and Kyogre caused disappointment among trainers. It was assumed that Niantic could hold back the Shinys because trainers will be rushing into the new raids anyway to catch the new Pokemon (via reddit)

This is new now: A few hours after the official announcement, trainers noticed a change on Niantic’s website (via reddit). If you now look at the official raid graphics, you can see the shiny mark on the proto-raids:

The trainers are happy that Niantic has now confirmed the shiny forms. But at the same time, the team is criticized for not making such mistakes with such an important announcement.

What remains is a certain ambiguity. Because one is not sure whether the Protos “reform” after the capture to the normal Groudon and Kyogre, similar to Mega-Pokémon. Or whether Primal Kyogre and Primal Groudon are “new” Pokémon that remain in the collection as Shiny.

In the next few weeks, Niantic plans to announce more information about the Hoenn tour. The gameplay should also change and announcements about items are still pending.

There’s a good chance the team will reveal more about exactly how the proto-forms of Groudon and Kyogre work. And a similarly important question: What about Kecleon – is it finally coming?