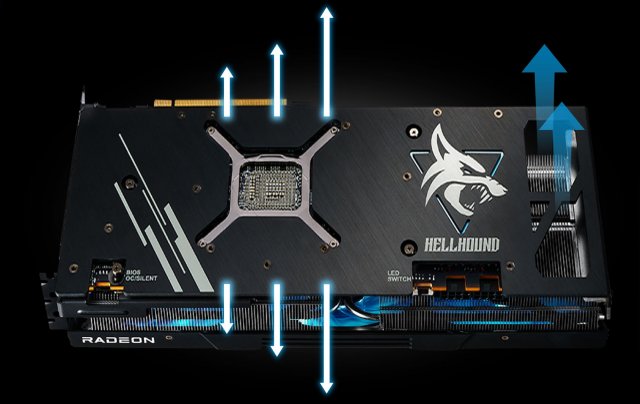 12/03/2022 at 11:45 am
from Maximilian Hohm –
After a teased image from Powercolor Japan, the manufacturer has now officially presented its new Hellhound models, the Radeon RX 7900XT and RX 7900XTX. These rely on illuminated fans, a decent power supply and a cooler that has been revised compared to previous Hellhound cards. Therefore, read more about the new graphics cards from Powercolor below.

In ten days, RDNA 3 should come onto the market in the form of the Radeon RX 7900XTX and Radeon RX 7900XT and compete with Nvidia’s RTX 4000 series or at least the RTX 4080. According to previous information, AMD’s new graphics cards already have some interesting features in the reference design that Nvidia cannot currently offer. The new high-end GPUs come with DP 2.1 instead of 2.0 and offer conventional eight-pin sockets that do not have the fire problems of Nvidia’s RTX 4000 models with a 12VHPWR connection.

Apart from the reference models, partner models are of course expected again, which should have high-quality coolers, dual BIOS, excessive lighting options and much more. We have already reported on the Hellhound models from Powercolor with the help of a picture, which have now been officially presented. The Hellhound series is in the upper middle class of the manufacturer, with models such as the Red Devil (Ultimate) and the Liquid Devil typically ranking above.

Nevertheless, the new Hellhound models should appear with a triple fan design. Users can choose between the standard shade of blue and amethyst violet. The latter color is intended to have an aesthetic effect, especially on a white model that will be released later. The new 7900XT(X) models will also use a 14-layer PCB and a 20-phase power supply, which should be comparable to the Nitro models coming on Sapphires. As in the reference design, the previous pictures show two eight-pin sockets for the power supply.

Unfortunately, Powercolor still does not provide any further technical details such as the core clock, power target or screen outputs. However, the new cooler is presented in detail. It has a relatively large direct-die copper plate that can cool not only the GPU but also the graphics memory. Compared to the last iteration of the Hellhound models, the cooler of the current models should reach 3 °C lower temperatures. Unfortunately, this information is relatively unusable, since the cooling design was used at most on a Radeon RX 6700XT, which places significantly lower demands on a cooler than the new high-end models. The important question of whether the Hellhound models are graphics cards with an RRP of 899 or 999 US dollars or significantly more expensive variants has not yet been answered at the moment.