Free gun is sold on eBay for 30 euros – players strike 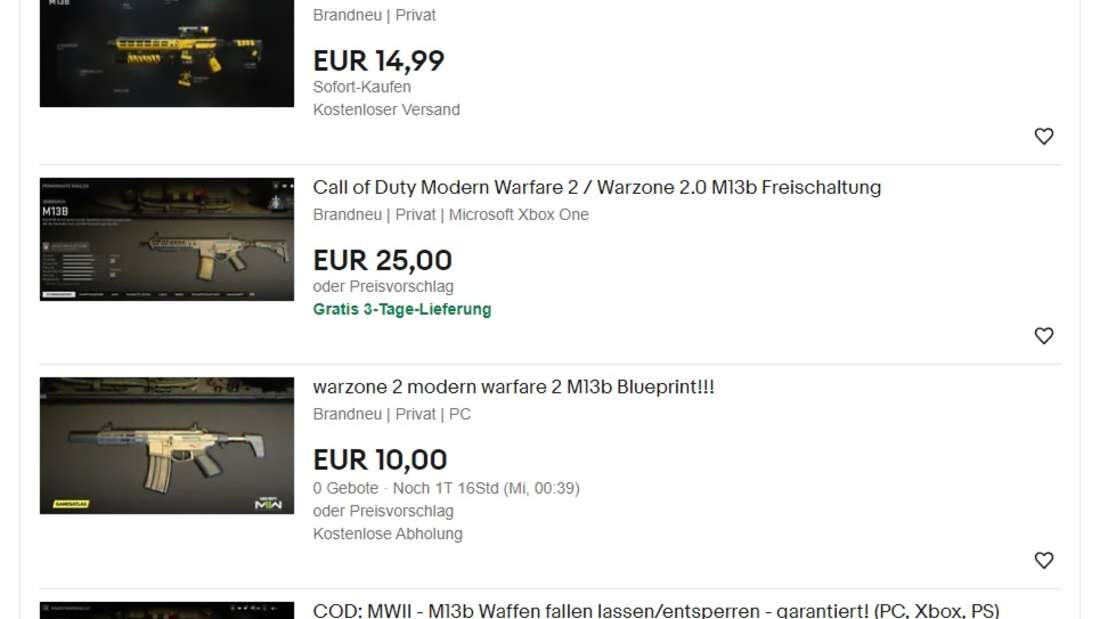 Because DMZ is a bit harder in Warzone 2, a free gun sells like hot cakes on eBay. But the M13B can be found infinitely often in 10 minutes.

Santa Monica, California – The shooter CoD Warzone 2 distributes some weapons only to players who take on challenges. But Call of Duty players will probably prefer to buy the new weapon on eBay for real money instead of getting it for free in 10 minutes. The developers of Modern Warfare 2 may also have some blame for making it a little harder to unlock the M13B in DMZ.

Warzone 2: Players prefer to pay real money for a free weapon instead of playing for 10 minutes

This is paid for in CoD: Players are used to having most weapons in Call of Duty comfortable Unlock by leveling in the Battle Pass. But Warzone 2 brought a new gun with the M13B, which you have to take away from a certain opponent in the new DMZ mode.

Stealing a gun in Call of Duty: DMZ takes about 10 minutes the first time. However, many players are unwilling or unable to complete the challenge. This directly arouses the greed of some others who are now selling the M13B gun, on eBay, for real money.

M13B on eBay: Apparently it’s a good deal for sellers of the M13B on eBay. The prices are partly at an astronomical 35 € for the weapon, which you can simply put on the ground endlessly once you have unlocked it. As many sense a gold rush, eBay is flooded with M13B deals. That pushes the price down, many are already selling the weapon for Warzone for 5 to 10 euros. Until recently, even a mustachioed free operator sold well on the black market for real money.

Warzone 2: Unlock M13B in DMZ and gift (or sell) an infinite number of times

Quickly unlock M13B yourself: If you want to earn the new weapon yourself – and at least save a few euros that way – you need about 10 minutes in a team. In DMZ mode, a chemist who looks like Walter White from Breaking Bad must be eliminated. He then drops the weapon with which you sprint to the rescue helicopter and, after a successful escape, have the M13B forever. Warzone 2: Unlock M13B in 10 minutes – Get new weapon in DMZ fast with trick.

Once captured, you can put the M13B on the ground for other players, friends (or customers) can then simply pick up the new weapon and then own it without beating up the chemist. To the credit of buyers on eBay, Warzone developers have made the M13B harder to get hold of. Until the last Warzone update, you could just run over the chemist with a car – vehicles near him will now be disabled.

So that you don’t have to buy keys for DMZ on the Internet, we’ll tell you in the guide how you can get them very quickly in the game: DMZ explained: Fortresses, keys and faction missions