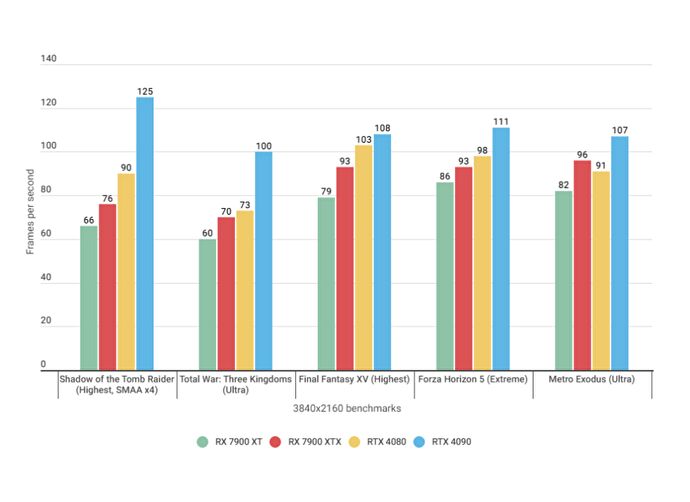 The AMD Radeon RX 7900 XT and Radeon RX 7900 XTX hark back to a simpler time – about three months ago – when graphics cards resembled graphics cards and not Coca-Cola lorries. I like getting a bajillion frames per second as much as the next PC owner, but good gravy, the RTX 4080 and RTX 4090 are a pair of oversized, ruinously expensive brutes. AMD’s two new high-end GPUs, therefore, have a golden chance to be the more modestly designed, affordable alternatives that prospective 4K players were waiting for.

Collectively, they’re also the debut showing of AMD’s RDNA 3 architecture. This is built around a Ryzen CPU-esque chiplet design, in which the 5nm graphics compute die is split up from six 6nm memory cache dies, theoretically granting all the biggest benefits of a smaller/more efficient 5nm manufacturing process while keeping costs down with some good ol’ 6nm hardware. Improved ray tracing performance, an arena in which Nvidia has repeatedly slapped AMD around for fun, is promised as well.

And what lovely graphics cards these MBA models are, too, all solidly built and dressed in tasteful black. The 24GB RX 7900 XTX is a tad chunkier than the 20GB RX 7900 XT, but both will fit in a PC case far more easily than the universally titanic RTX 40 series cards we’ve seen so far. I do think Nvidia have lost their way on basic practicality with their latest models, but the RX 7900 XT and RX 7900 XTX are shorter, narrower, and don’t need a special PSU cable adapter that may or may not catch fire. The RX 7900 XTX’s PSU requirement, 800W, also happens to be lower than the RTX 4090’s 850W minimum. Lake? practicality.

It’s not like the sanity-reasserting dimensions have spoiled the cooling, either. What appears to be a straightforward triple-fan air cooler setup keeps both MBA cards well within safe temps, and it was in fact the higher-spec Radeon RX 7900 XTX that posted a lower peak of 69°c. The RX 7900 XT crested at 74°c under the same kinds of gaming loads, which is still fine.

You can, of course, use one of these GPUs to burn through whatever resolution your please, but really these are 4K cards for 4K monitors. Just as the RTX 4080 and RTX 4090 are, though after only a few games benchmarks, it became clear that the RX 7900 XT and Radeon RX 7900 XTX aren’t strictly 1:1 equivalents to those GeForce GPUs. The RTX 4090, especially, feels like a tier above all three others, with double-digit leads over the RX 7900 XTX across a bunch of games at 4K.

The RX 7900 XT also lacks a certain next-gen freshness, often equaling or landing behind luxury last-gen GPUs like the RTX 3090 Ti. Still, let’s keep in mind that both AMD cards are much, much cheaper than the current RTX 40 series (and the RTX 3090 Ti, for that matter), with neither of them needing to drop settings for smooth, ultra-quality 4K.

The RX 7900 XTX is the better of the two, though. Miles better. Despite being about 11% more expensive than the RX 7900 XT, it has a tendency to be much faster proportionally, with a 16% advantage in Assassin’s Creed Valhalla, a 17% advantage in Metro Exodus, and an 18% advantage in Final Fantasy XV . In one or two games, it can even buck the trend and go toe-to-toe with the RTX 4090, like in Valhalla, Watch Dogs Legion, and Hitman 3. The RX 7900 XT ain’t slow but it ain’t much cheaper than the RX 7900 XTX either, and when you’re already committing to the investment of a 4K rig, why not just drop the extra £100 / $100 for a much more capable card?

Also of note is how regularly the RX 7900 XTX can outpace the RTX 4080, at least when ray tracing is turned off. Nvidia’s GPU is, at best, 20% harder on your wallet, yet it was only significantly faster than the RX 7900 XTX in two of these 4K tests (Shadow of the Tomb Raider and Final Fantasy XV). The two GPUs are intensely competitive otherwise, with the RX 7900 XTX eking out leads in Metro, Valhalla, Watch Dogs Legion and Hitman 3. If you don’t care about tracing rays, the RX 7900 XTX delivers a generally more appealing balance of high performance and not-quite-so-ludicrous pricing.

Unfortunately for AMD, some of us do crave the fetching lights and detail-rich reflections of ray traced effects, and as relatively sensitive as these RDNA 3 cards are, Nvidia still have the edge once these are enabled. Maybe even the entire sword: adding Ultra-quality RT effects to Metro Exodus saw the RX 7900 XTX’s 96fps average plummet to 45fps, whereas the RTX 4080 only fell from 91fps to 62fps. And that’s not just a numbers game, as 62fps will look noticeably smoother than 45fps to even a lightly trained eye.

Hitman 3, the ray tracing settings of which are an even greater bane on GPUs, cut the RX 7900 XT’s 152fps result to just 29fps. That’s an 80% performance reduction with RT effects engaged, and the RX 7900 XT didn’t fare much better, dropping from 171fps to 33fps. Again, the RTX 4080 showed that Nvidia’s dedicated RT cores simply have a better handle on the tech than RDNA 3 has managed, even with the latter’s optimisations: the RTX 4080 also met a steep FPS drop, from 162fps to 46fps, but the latter will look smoother and play more comfortably than either of the RX 7000 cards’ post-RT results.

Back to rasterized performance for a mo, 1440p is where all four of the class of ’22 get much tighter. The RTX 4090, undisputed lord regent of 4K, can only claim a meaningful lead in Shadow of the Tomb Raider and Forza Horizon 5. Everywhere else, it’s either a surprisingly close call between the new Radeons and their GeForce rivals, or an opportunity for the RX 7900 XTX to come out on top.

I did notice the RTX 40 series gets a bit weird about 1440p as far back as my RTX 4090 review. You’d think that such mighty components would paste this lower, demanding less resolution, but for whatever reason they often barely improve on their 4K benchmarks. By contrast, the RX 7000 series takes full advantage of the lower pixel density, to the point where even the RX 7900 XT can compete with the RTX 4090 – a GPU nearly twice as pricey.

In some cases, you can call upon FSR (FidelityFX Super Resolution) upscaling to regain some lost frames. It doesn’t even need to be in conjunction with ray tracing, like in Horizon Zero Dawn, where FSR 1.0 – on its highest ‘Ultimate Quality’ setting – gave the RX 7900 XT a healthy boost from 90fps to 120fps at Ultimate-quality 4K . Like all modern GPUs, the RX 7900 XT and RX 7900 XTX will also support Intel’s XeSS upscaler, where available.

Buuuuuut… FSR is still no DLSS, the AI-powered Nvidia equivalent that’s only available to RTX GPUs. Although more recent FSR versions, namely 2.0, 2.1, and 2.2, all represent visual fidelity improvements over version 1.0, DLSS upscaling looks the sharpest of the lot. The very latest RTX 40 series models also have the benefit of supporting DLSS 3, which bumps up framerates even higher with some surprisingly effective interpolation sorcery.

AMD is working on its own version of DLSS 3, FSR 3.0, but they haven’t released it yet. Or, really, gone into much detail about it at all. At any rate, it’s a shame that the RDNA 3 generation doesn’t really have any compelling new features, outside of the ability to fit inside my test PC without me needing to partially disassemble it. Which, yes, was a pain when I tested the RTX 4090 and 4080, but pragmatic proportions should be a basic design requirement, not a headline-grabbing bonus.

Then again, perhaps the RX 7900 XTX doesn’t need one. As much as I try to use DLSS and ray tracing myself, they’re not even supported in the majority of games, so by and large this GPU will simply produce good 4K performance for much less cash than the RTX 4080. That’s a pretty decent proposition all by itself.

This does leave the RX 7900 XT arguably bereft of purpose – honestly, just spend the extra hundred – and if you’re not in a rush, you might want to wait and see if Nvidia really do re-launch the scrapped 12GB RTX 4080 early next year. For now, however, the RX 7900 XT is the best of the current GPU generation, should you want a 4K card at a price that doesn’t quite feel like a personal insult.