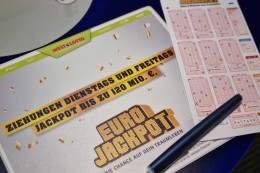 Munster/Essen.
Lottery Santa Claus made a Hungarian very happy in the last Eurojackpot draw. 75 million went to the only winner.

Santa Claus is not always on time: A lucky guy from Hungary was the only one to win in the first prize category in the most recent Eurojackpot lottery draw on Friday, December 9th. He becomes a 75-fold millionaire. His luck that in the last Tuesday drawing on St. Nicholas Day, December 6th, the top prize category remained vacant and the jackpot was able to continue to grow.

The winning numbers determined in the Helsinki draw were 6, 8, 13, 21 and 32 with the two euro numbers 3 and 6. The exact winnings for the new euro jackpot millionaire are 75,871,601.70 euros. Does he see the win as a belated Santa Claus surprise or an early Christmas present? The lucky guy will probably say to himself: It doesn’t matter, the main thing is that you win! In any case, the Christmas gifts can now be a little more luxurious.

In the draw on December 9th, nine other players won high prizes in the six-figure range. In second place, 745,969.40 euros each went to Hungary (2x) and Finland. The third place is also impressive: players from Bavaria, Lower Saxony, North Rhine-Westphalia, Schleswig-Holstein, Slovakia and Finland are happy about it. You will be paid 210,346 euros each.

The current jackpot period ends after nine draws. The Eurojackpot was last hit on Tuesday, November 8th. On this day, the sum of 120 million euros went to Berlin: lottery record in Germany!

See also  F1 22: The official game of the Formula 1 World Championship in the test

Before the current lucky guy, there were already eleven million winners in the Eurojackpot lottery in Hungary. The current 75 million euros is a record for a lottery win. The previous record was from 2019. On November 22, 2019, players from Bavaria, Hesse and Hungary shared what was then the maximum jackpot of 90 million euros and won 30 million euros each.

Next Tuesday, December 13th, the Eurojackpot starts again with the jackpot sum of ten million euros. Bets can be picked up at all WestLotto acceptance points or at www.westlotto.de be given.