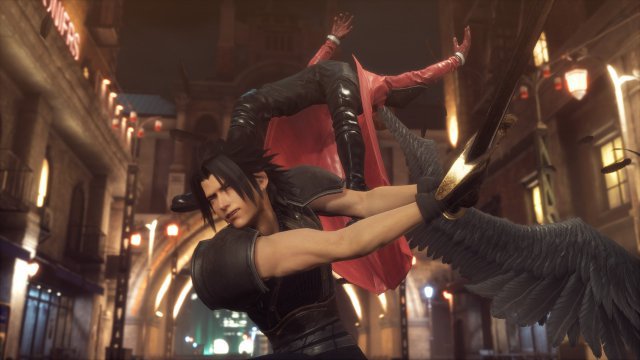 Did the introduction confuse you? Lots of weird names? Spiked hairstyles are stupid? Steep thesis: In 2008 (in Japan 2007) you didn’t have the pleasure of shooting through hundreds of side missions on your train journeys with Supersoldat Zack? Not bad at all. Because there’s never been a better time to catch up on the prequel to Square Enix’s most influential RPG, and if you’re a fan of Final Fantasy 7, you may have some really good times ahead of you. Maybe not. But first things first, let’s break this down and get to the core of the core. And if you already know and love Crisis Core from before: Welcome back, it will be…

Howl softly, Genesis! The render sequences exude their over-the-top charm even in higher resolution. Anyone who likes dramatic fights against one-winged fashion influencers will get their money’s worth here!

…time for a reunion! A half-hearted spoiler warning at this point: Crisis Core: FF VII Reunion is a remaster. Graphics, sound and game mechanics have been completely overhauled, but the story remains unchanged and tells the story before the original Final Fantasy 7 from 1997. In some aspects it no longer fits the plot of the current Final Fantasy 7 remake or anticipates it. Let’s leave it at this point and note: Cloud Strife, hero of the main game, knows Zack Fair, the hero of the prequel discussed here, from before. Both worked for the megalomaniac Shinra corporation. Zack is a member of the special unit ‘Soldat’ and is tasked with tracking down his missing instructor, his father, Angeal. Angeal disappeared in search of his super-soldier buddy Genesis, who swapped corporate guidelines for the script of an ancient play and has been roaming the area marauding and bombastic ever since. Following in the footsteps of the two, Zack is drawn into a maelstrom of betrayal, eco-crime and genetic experimentation. A erratic, sometimes absurd and especially towards the end enormously emotional story, which also serves as a vehicle to initiate reunions with old acquaintances such as Sephiroth, Aerith, the Turks or a young Cloud. 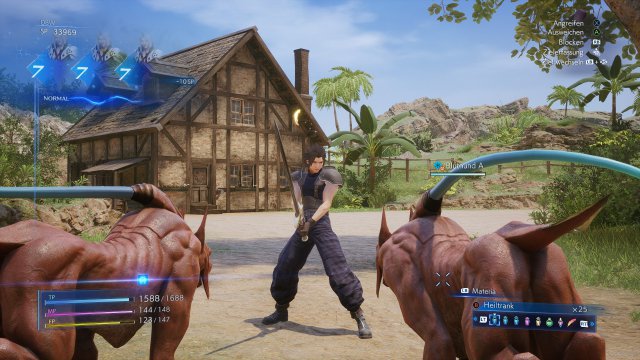 Thanks to the freely rotatable camera, you can keep an eye on the battle of the remaster at all times. In the original, there were often attacks from the blind spot, especially in groups of opponents.

The remaster treatment is particularly noticeable visually: Crisis Core can’t keep up with the splendor of Final Fantasy 7 Remake, but finely textured environments and completely renewed character models bring the classic prettily into the year 2022. Midgar’s streets shimmer in the mysterious green of the Mako Reactors, the slums under the Disk City are bursting with shoddy details, and the spectacular hairstyle of Sephiroth & Co. has atmospheric peaks of light. From time to time, some facial expressions are still reminiscent of the cartoonesque facial expressions of the original, but overall the look of the upscaled render scenes of the PSP era goes well with the new sequences in game graphics. Drilled rain of sparks with sword blows and all sorts of magical fuss round off the contemporary visual impression, which consistently runs at a pleasant 60 fps (PS5, Steam). Only the pre-calculated film scenes let their age shine through at 30 fps. The soundtrack was also generously tampered with, the spoken texts of even the smaller supporting characters are now competently fully voiced and the soundtrack has been remixed. PSP purists might miss the option here to reset the music to the less refined but more powerful sound of the original, but as we all know, taste can be argued with… Oh yes, speaking of which… 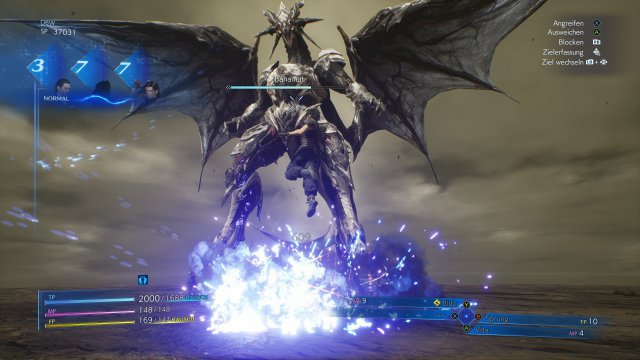 The materia ability Leap helps against the laser fire from boss dragon Bahamut. Thanks to the freely assignable quick menu, you can now use such special abilities quickly and easily.

In addition to the apparently better optics and the game menus adapted to the standard of 2022, the biggest game-mechanical innovations relate to the fights. That’s a good thing, because the skirmishes make up the lion’s share of the action RPG: Whether it’s groups of enemy soldiers, Mako mutants or summons that often appear as bosses – Zack processes them all with swordsmanship and materia spells to gain experience points. The basic principle of the original was retained, but plays much more smoothly in the remaster. With a free camera and quick reactions to key commands, you can trigger simple melee combos, roll away or block enemy attacks. Great innovation: Bosses’ special attacks, which used to suddenly erupt, now charge for a few seconds. During this time, you can use targeted counterattacks to significantly weaken the strength of the enemy skill or even bring it to zero percent. Also nice: The use of healing potions, spells and special maneuvers such as jump attacks are now integrated much more organically into the battle through freely assignable quick menus; the cumbersome toggling through objects and materias has been left in the PSP past.