Synced is a roguelite looter shooter that struggles to stand out 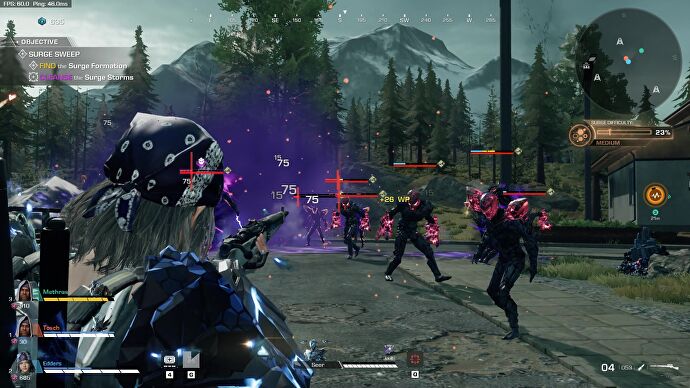 Synced is an upcoming free to play third-person looter shooter developed by NeXT Studios, and is Tencent’s crack at a live-service game akin to The Division. It has roguelite bits to help it stand out a touch, with the ability to command your own shiny gem pal to bash enemies. But from what I’ve played so far, its lack of clarity makes its grind for currencies and mod slots and whatever else a tired affair that probably won’t pull you away from the bazillion other games that require a lifetime investment.

I spent just over an hour with Synced’s PVE mode Dead Sector, where I teamed up with another journo, and a member of the PR team who guided us both through the mode’s inner workings. I bounced between a couple of Runners (classes), one who chucked a poison bomb and a silver fox of a medic who’d probably excel on Hinge. The game does have a PVP mode, but it wasn’t available during the preview unfortunately.

We started a Dead Sector run that plopped us onto a map reminiscent of PUBG’s original environment: a non-descript plain of green grass, rolling hills, and generic scientific checkpoints that consisted of gray buildings and steel staircases. Our goal was to move between surges, a sequence of swirling tornadoes that spawned waves of crystalline baddies that we had to clear as fast as we could, as a timer ticked down and upped the difficulty from doable to impossible.

While I’m a fan of clear-cut goals, my motivation to explore the map and seek out safe rooms filled with loot, or indeed anything else, which snuffed out by the need to plow on. If we hung about, we’d make things harder for ourselves, and “harder” meant getting so much as a nick from a golem’s gem and immediately going down. The reward never seemed to outweigh the risk.

To help us beat the clock – and the surges – the game hit us with upgrade stations that were straight out of the roguelike equivalent of the Screwfix catalogue. So long as you had enough cash to hand, you could choose from three random upgrades that would alter your character’s build in some way. For instance, “eliminating a Nano by hitting its Weak Point drops explosives” or “Stunned Nanos with low health are killed with one hit”, each complete with rarities and levels. These stations would pop up periodically, so in a Hades or Dead Cells sort of way, you could opt to upgrade your upgrades as you went along.

I wouldn’t say I felt the impact of many of the upgrades, though, even if I knew they were doing something, if that makes sense? Like, the numbers that popped out of enemies may have been higher, but I wanted my fallen enemies to erupt with a cascade of fireworks or scatter blasts like they’d dropped packets of explosive marbles. Still, us Runners had our own Nanos up our sleeves – quite literally – so that maybe the ability to command our own baddie would provide some much-needed spark? Well… sort of.

The game’s big hook is commanding your own Nano companions, which can bash, beam, or block baddies for you. There are four to choose from, each fulfilling a specific class role like a big lad who smashes stuff, a scout who scans stuff, a tank who blocks things with his shield, and a sniper. If you’re in the thick of battle, you can press a button to send them in and crack on, which makes scraps that little bit easier, although it was hard to get a sense of the others’ usefulness, as the “Seer” (one who scouts and shoots laser beams) didn’t seem to do an awful lot, while the “Crusher” was so obviously pummeling stuff around me. Maybe in much harder scenarios they’d outdo themselves, but – channeling my obnoxious Apprentice board room lingo for a second – I didn’t they they added much value to the Surge clearing. Aside from making things easier, it would seem silly to go for any other Nano than the massive one who crushes stuff.

So, we cleared around three Surges before a BIG SURGE spawned on the map, which ended up being a large pillar that shot area-of-effect spikes on the ground and sported these googly weak points we’d need to rattle our ammo into. Defeat this fella and we’d reap the rewards! Modification chips and currency with which to equip said chips! And then, we’d repeat the process all over again, which I think was meant to be a bit trickier but didn’t really feel it? Anus that we reached the Tyrant, the mode’s big boss.

And the Tyrant proved to be a short-lived affair. Mainly because we all died in one hit to a hulking great crystal man, and went to back to base with our spoils. It’s at the base you can bang open your character’s menu and stick those mods right up into your four PVE ports – so long as you’ve got the chips to do so. The customization seems like a deep well, to be fair. You can enchant your weapons with fire or, like, slap different attachments on to alter their stats. You can upgrade your mods or recycle them. You can stick some mods up the ports of your Nano friend, too. Speak to the NPCs in the base and they’ll offer you a checklist of missions to complete to earn more of various currencies. That’s live service with a (slightly dead) smile, baby.

If you can’t tell already, my thoughts on Synced could all be rounded up into a pen of indifference. Not to be too downbeat or reductive, but I can’t see that it’ll carve out its own space and fend off all the other mighty, mighty live service games out there. Especially when a lot of the game’s defining features, like its roguelike upgrades and nano companions, are about as clear as an aged shower screen. There’s nothing that punches through it and offers anything new, even if “new” meant a shattered shower screen and a floor that’s now flooded with soapy water. I’d take that to be honest.

Not to say that Synced doesn’t deliver a fun experience – far from it. I enjoyed myself! Despite being a beta, the game felt quite polished, with gunplay that made melted health bars in the same satisfying way that you’d get in something like The Division or Remnant From The Ashes. If you’re a sucker for numbers popping out of enemies and hoovering up loot, the game certainly delivers.

But from what I’ve played so far, I wouldn’t say it does anything that’ll either pull me away from the Destinys or Fortnites and wouldn’t convince me to invest all my time into another looter shooter. Perhaps the PVP mode is where the game’s true magic lies? Maybe? We shall see, I suppose.

If you’d like to give the game a crack, the open beta starts on 10th December and continues all the way through to 15th January.