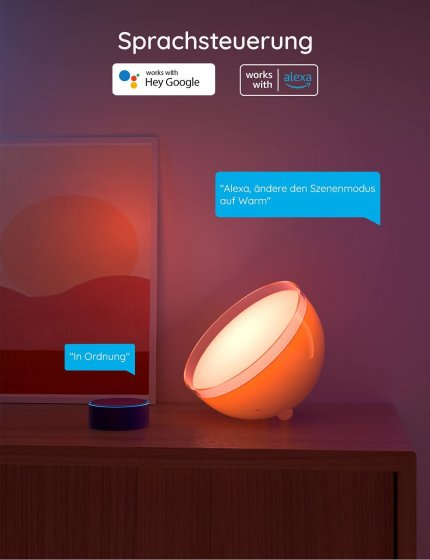 In a good 11 days Santa Claus will be at the door, then it will be Christmas Eve and the Christmas tree will shine in the room. In order to ensure the right Christmas mood, there are also individually controllable light strips, which are now available from various manufacturers. The Canadian start-up Nanoleaf originally started the trend, and since 2017 Govee from Hong Kong has also been offering flexible wall panels, albeit at a lower price. Shortly before Christmas there is now a campaign on Amazon that gives you 30 percent cheaper access to many Govee products. If you want to save, however, you have to hurry, because the voucher code can only be redeemed until December 18th at 11:59 p.m.

What can Govee lights do?


The Govee table lamp can be controlled via Amazon Alexa.


Objects can be individually illuminated with the at least five meter long LED light strips. There are no limits for your creativity. 60 LEDs are available per meter, each of which can light up in its own segment. In the large Govee test by the PCGH guide, numerous products, such as the Glide Wall Light, were able to convince with their luminosity. In addition to the option of controlling it via remote control, you can also control the LED strip via the Govee Home smartphone app and via Amazon Alexa and Google Assistant. With the Govee LED Strip, an IC chip ensures that several colors can be displayed on one light strip at the same time.

In addition to light strips, Govee also offers wall panels, TV backlighting, fairy lights and smart lamps. The portable table lamp competes with the Philips Hue table lamp, for example. Compared to the Signify brand’s bedside lamp, the Govee interpretation has an on/off switch on the back. In addition, the lamp from Hong Kong does not need a bridge, but has a built-in Wi-Fi module and thus offers a more stable connection to the smartphone and to Alexa devices, such as an Amazon Echo. For a limited time, Amazon is offering the Govee Wi-Fi LED table lamp at a 15 percent discount. 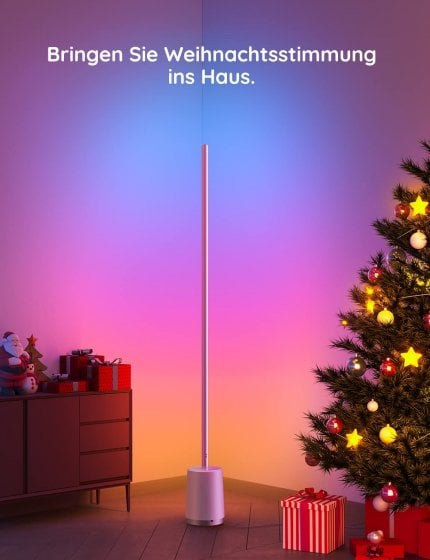 The Govee floor lamp Lyra offers 64 different scenes and, thanks to the built-in microphone, can stage the right light show to the music.

See also  WoW WotLK Classic: In which zone with which level in Northrend? Overview in the guide


For those who prefer one size larger, Govee offers two different floor lamps. On the one hand there is the LED floor lamp in black with a height of 1.40 m and a width of 20 cm. The lamp is currently available on Amazon for only around 95 euros, so you can save 15 euros. Instead of using the supplied remote control, the lamp can also be controlled via Amazon Alexa, Google Assistant or a smartphone app. If you want even more scene modes and an aluminum construction, you can buy the Lyra floor lamp. At a height of 1.45 m, the lyre shines in different colours, which can also be matched to the music if desired. In order to be able to offer the background color for the Christmas spirit, a microphone is built into the base, which can analyze the music being played, if you want. Govee announced a cooperation with Razer this year. Govee products can now also be controlled with Razer Chroma RGB.

Currently, the Glide Hexa Light Panels, Glide Wall Light, Neon Rope Lights, and RGBIC LED Light Strips are compatible with Razer. In the future, other Govee products will be enabled to be integrated into the Razer ecosystem. How to light up the gaming room together with Razer products and Govee lights:

If you want, you can buy the Govee LED Strip for only 25.99 euros from Amazon buy five meters long. After entering the promotional code “Govee RGBIC LED Strip 5m H61253D2”, the price can be reduced by five percent. If you buy more Govee products, there is even a 10 percent discount at Amazon. However, the offer is only valid while stocks last, but no later than December 18th. In addition to the Govee LED Strip, there is also the LED Strip M1, which with 60 LEDs per meter promises even more luminosity than the cheaper Govee LED Strip.

If you set up a light strip or a Glide Wall Light, you should follow the instructions exactly. Finally, the adhesive strips offer enormous adhesive power. However, Govee does not supply replacement adhesive strips. If you are not careful when attaching it, you risk taking the wallpaper with you. With the Govee panels, it is crucial to plug the components into the correct slots.

The illuminant cannot be replaced, so that Govee products become “disposable” in the event of a defect. However, the competition, such as Nanoleaf, is no better. On the contrary, at Nanoleaf, there will be no updates to existing products as of this writing. As a result, previously purchased smart home products from Nanoleaf become electronic waste, at least if you want to rely on the cross-manufacturer smart home standard Matter. The Canadians only guarantee compatibility with new Nanoleaf products.

Deals on Govee lights at Amazon

As an alternative to Philips Ambilight, Govee offers the new TV backlight T2. The LED lighting should bathe the entire room in a pleasant light. Philips TVs. The background lighting is adjusted to the content currently being played by means of an ambient sensor and thus immerses a room in the appropriate color scheme. Now the competition is preparing to launch an Ambilight alternative that can be used with any television. This is how the Govee TV Backlight T2 Buy now on Amazon. For a limited time, the TV backlight T2 is available at a discount. The predecessor T1 is ideal for those who can manage with a pixel density of 171,000 points per half second. Amazon is currently selling the Govee TV backlight T1 for only 47.99 euros. This saves 40 percent.

With the Govee TV backlight you can attach a Philips Ambilight to any TV.


In addition to the LED light strips, the scope of delivery also includes a dual camera that films the content of the TV in order to be able to adjust the lighting accordingly. With the patented Envisual color matching technology and an algorithm, there are said to be several differently lit zones. In addition, the manufacturer promises that the lighting effects should automatically synchronize with the content being played. The prerequisite is the use of the official Govee Home smartphone app, which can also be used to control many other Govee devices.


Together with Sonos, Ikea presented the new Symfonisk floor lamp with WiFi speaker. What does the lamp have to offer?


D-Link has announced that it will soon be retiring its Mydlink Home service. These smart devices then become almost unusable.

Current savings offers from Amazon, Alternate, Media Markt and Co. are available in our Daily Deals. OurPCGH Technology Advisor Portal. Graphics cards and other technology products can be priced with thePCGH price comparisoncheck.