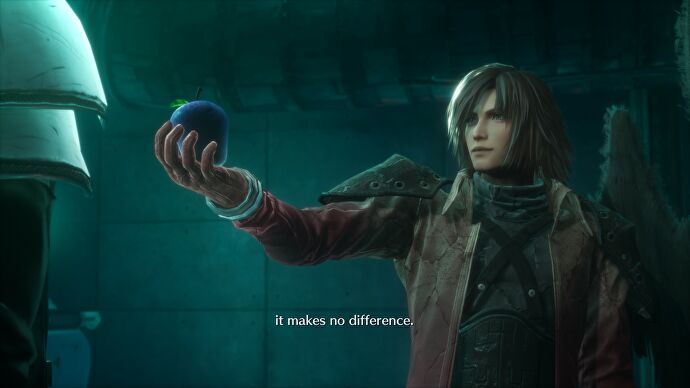 When Crisis Core: Final Fantasy VII first came out in 2007 as part of Square Enix’s somewhat indulgent (and merely so-so) FF7 Compilation project, it was intended to fill in the backstory of one of the main game’s most mysterious and spoilerific character twists . Namely that FF7 hero and perpetual mopey boy Cloud Strife wasn’t quite who he thought he was, and that he actually owes a lot of his life (literally and figuratively) to the peppy, squat-loving ShinRa go-getter Zack Fair. (And if you’re mad about spoiling me that 25-year-old story beat, wait until you see what they’ve done with FF7 Remake).

It’s with FF7 Remake in mind, though, that many of you will probably be wondering where this swanky new remaster of FF7’s PSP prequel fits into the increasingly up for grabs timeline of Squeenix’s ongoing Remake trilogy. And just as the original Crisis Core was almost impossible to talk about without entering major spoiler territory for the main game of Final Fantasy VII, so it goes for Crisis Core – Final Fantasy VII – Reunion. For the spoiler-averse, I’ll say this. If you don’t already know the backstory of Zack and his relationship with arch mega villain Sephiroth, this is a perfectly fine action game that’s received a lot of welcome polish for a 15-year old PSP title, but is probably still best experienced through a comprehensive YouTube retrospective as opposed to forking out £40 / $50 for it. For everyone else out there, though, let’s get into it.

Or rather, is there even anything to get into? Alas, if you were hoping for some sort of explanation about FF7 Remake’s canon-breaking ending, you’ll be disappointed here. As a prequel, Reunion would have been the perfect opportunity to seed many of the ideas later explored in FF7 Remake, but this is very much a straightforward remaster of the PSP original. No noodly ending rewrites, nothing.

In many ways, it shows remarkable restraint on creative director Tetsuya Nomura’s part (who’s also the main instigator behind the entire FF7 Remake trilogy), although given that Crisis Core’s main villain still spends 99% of his screen time quoting bad poetry at you while gesticulating with a large, purple apple in his hand, maybe that’s not saying much. It’s possible, of course, that this is intentional. After all, just as FF7 Remake sort of requires you to have played the original FF7 to know how they’ve meddled with its seemingly immutable lore, you could argue that Crisis Core is now the skeleton key that unlocks them both, not just in how it sets up vital plot points for the latter stages of vanilla FF7, but also how they’re then twisted and morphed in the final moments of Remake.

The end result, however, is ultimately the same. Even now, there’s little reason to seek out Crisis Core Reunion unless you’re really in it for the Sephiroth ‘was actually once a good guy’ fan service. I never played Crisis Core on the PSP, but I’ve absorbed enough FF7 nonsense over the years to know who its key players are and how they connect to its overarching story. Actually playing Crisis Core did nothing to change or improve my opinion of these characters, and unless FF7 Rebirth is going on a wild tangent somehow, I’m not sure there’s much benefit in getting to know the rest of its supporting cast who (for obvious reasons) don’t make it past the end credits.

Credit where credit is due, at least. This is quite the handsome glow-up from its PSP original, and if it weren’t for the rigid, linear corridor design of its original maps, its art direction and visual design would feel very much of a piece with FF7 Remake. The newly rearranged soundtrack by Takehiru Ishimoto is also another welcome addition, and Square Enix have even gone to the trouble of re-recording all of its dialogue with the now current voice cast to really make it feel like its part of the same universe.

Sadly, they did not extend the same courtesy to editing that script, hence why emo poetry boy Genesis still comes across as an overwrought caricature of a villain rather than any real threat. Its excessive use of cutscenes and flashbacks to deliver its apparently critical backstory also gets in the way of it trying to be a good game a lot of the time, too. You can barely take three steps toward an objective marker before being thrown into yet another cutscene – although I’m fully willing to admit that this maybe feels even more exasperated in 2022 given the compact size of its PSP-hampered maps.

Don’t get me wrong. Final Fantasy games have proven time and again that very good things can happen in exceedingly pretty corridors (X, XIII, heck, even FF7 Remake) if the surrounding combat is good enough to hold your interest through it all, but sadly Crisis Core doesn’ t quite manage even this. Its real-time combat is an interesting curio, for sure, with many of its quirks and chaotic energy governed by a constantly spinning roulette wheel in the top left corner. In fairness, I’d actually love to see this system crop up again in the Final Fantasy series at some point, as the way it can trigger various stat buffs and limit break abilities depending on what combination of numbers and character portraits it lands on is infinitely more interesting to me than the hybrid real-time / turn-based combat seen in FF7 Remake.

When the right numbers reduce the cost of magic attacks to zero, for example, you know it’s time to whale on your Firas and Thundagas like there’s no tomorrow. Similarly, you can also gain brief spells of invincibility or boosted magic defenses, and if Zack’s feeling particularly pumped about a character he’s just met – say, Aerith or Sephiroth – their character-themed limit breaks are more likely to come up in the wheel’s rotation . It’s exactly this kind of spontaneous havoc that can breathe new life into age-old JRPGs, but its over reliance on cheap as chips items to replenish your magic and action point bars (as opposed to being done through the combat itself) means it’s very easy to exploit, leading to repetitive magic spamming and ether bottle chugging that effectively robs it of all its improvisational brilliance.

There’s also the slightly interminable slog of having to fight the same enemies over and over again in Crisis Core Reunion. It’s not even for the usual color palette swap reasons either. The entire plot revolves around Genesis (and eventually Zack’s bestie mentor Angeal) making clones of himself to wreak their deluded havoc upon the world. There are some honest to goodness monsters thrown in there as well, but holy chocobo warks, it sure does get tiresome by the end of its 12-hour storyline, never mind the bloated, maze-like side missions on offer that can net you more powerful items and materials. In truth, you don’t really have to engage with these side missions to complete Crisis Core. I dabbled in a handful of them to get a couple of critical summons materia, but quickly lost any appetite for pursuing them further. They might be prettier corridors than they were 15 years old, but their repetitive, copy-paste layouts and warren-like designs are still a recipe for some prime mid-00s grind.

So yes, while there are some bits of Crisis Core worth salvaging for a modern, overdue tune-up, Square Enix and co-developers Tose Co Ltd simply don’t go far enough in bringing this up to date for a post-Remake audience . Some may find the straightforward nature of this remaster rather comforting after Nomura effectively ripped up the rulebook with Remake, but personally, I’d rather something new and bold than a game that simply retreads old ground again. And in Crisis Core’s case, its very old ground, its key story beats having been repeated, regurgitated and repurposed so many times over the years that every man and their moogle now knows what Zack’s deal is without having spent a single minute playing his actual prequel . And if you don’t, save yourself the trouble and watch a TLDR retrospective on YouTube (I can recommend a good one). You’ll get all the benefit of what Crisis Core means to the wider FF7verse without the pain of actually having to sit through all like its button-mashing combat, turgid side missions and naff, Shakespearean apple boy speeches. Does run beautifully on Steam Deck, though, I’ll give it that.