Get Away: Kayla Shyx suffers a serious accident at the big MontanaBlack event 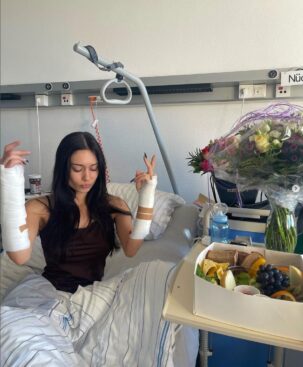 MontanaBlacks first own show is overshadowed by a dramatic accident. In the final episode of get away Kayla Shyx broke both her arms and had to abandon the final. And this was not the only thing that went wrong.

finalist in the hospital

This is certainly not how Kayla Shyx imagined her performance in the finale of Get Away. as one of three finalists the youtuber had qualified for the escape show. This time, too, the candidates had to break out of prison again.

To do this, they first had towall of pain“, break through a wall filled with earth. And all without any tools. while the camera Knossi and Unsymphatisch TV watched them force the obstacle “break downwanted, the accident happened.

Shyx quickly signaled that she could not continue in the finals as she believed she had broken her right arm. In the hospital it turned out that even both arms were broken and she underwent direct surgery under general anesthesia.

Fans had only guessedthat Kayla Shyx may have sustained the injury while hitting the wall. MontanaBlack clarified later via Twitter.

After the incident Knossi and Unsymphatisch TV continued the competition. After fighting through several doors, the opponents had to unite behind the third door Find the key in a sand chestto untie her ankles.

Knossi found the key, but could not open his lockthere too much sand got into the mechanics was. The direction then allowed him to continue and he ultimately managed to win.

How is Kayla Shyx now?

In the meantime she is doing so well again that she look back on the events with humor can.