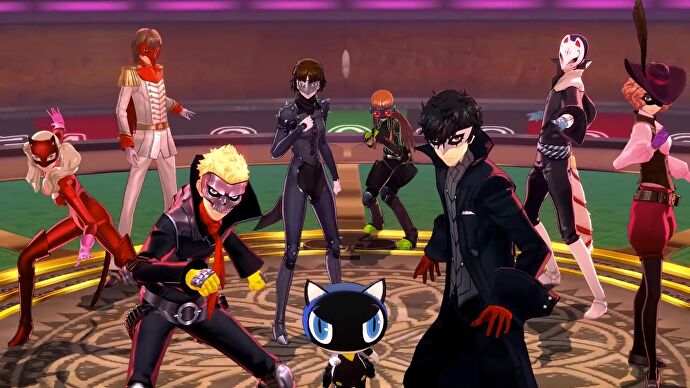 Welcome to the RPS Advent Calendar 2022! Every day we open a new door and reveal one of our favorite games this year. Check the main calendar post to see the full list.

Today we reach day 13 of the RPS Advent Calendar. This is unlucky for some, but not for a group of cool, fast movin’, psyche-battlin’ schoolkids, who spend a lot of time on extra curricular activities and not enough time getting their talking cat to shut up.

Ed: Persona 5 Royal is a JRPG about a guy who moves to Tokyo after he’s involved in a dodgy incident and then joins Shujin Academy as a bit of an outcast. Here, he meets some mates and forms The Phantom Thieves, a bunch of high school misfits who make it their mission to enter the metaverse (not that one) and change the hearts of horrible people.

Persona 5 Royal is the definitive version of the original game, adding a new character into the mix, a new semester, and a wealth of small tweaks that make the Phantom Thieves’ journey even better. While I’m only beginning to encounter these subtle changes (it’s a very long game), I can confirm that it’s paced better than its predecessor, with plenty of the game’s former irritants either eradicated entirely or reconfigured with twists to make them funnerer. I’m talking about added story cutscenes, new enemy types, traversal tools, Christmas outfits, and an entire new semester which I can’t wait to reach.

I rarely replay games, especially those the size of Persona 5. But I’m happily doing so with Royal because it houses pals that I simply like to hang out with. Every evening I get to spend some time with the gang, talking not just about the next horrible person we’re going to stop next, but, more importantly, nothing in particular. We’re just studying and eating ramen and all of it may be upping my overall stats and my gear, but hey, I’m just happy to be back chilling with my buds. What more could I want?

Liam: Poor Ed. Every few days he recieves a message from me on Slack where I update him about my progress through Persona 5. In my defense I don’t know anyone else who’s picked their way through this mammoth JRPG, and this thing is so dense I just want to enthuse about every little scrap of it with someone who understands my excitement. I am months away from finishing this (like I said, it’s a biggun) but there’s almost something quite comforting about that. Yes, the road ahead is 80-100 hours long, but that’s 100 hours I have left to grab Ramen with Ryuji or to study for my finals on a rainy afternoon. Persona 5 is a warm, cozy thing to spend time with. Oh, and it’s a perfect fit for the Steam Deck too.

Morgana can do one, though.

Garmin Philip
See also  GTA 6: Rockstar developers on the release: "I don't know what you're talking about."