Number of bosses: 3
Time limit: 30 minutes from the level phase of WoW: Dragonflight and in Mythic Plus mode, the bosses don’t change much. Each of them only gets one new ability and of course everything causes significantly more damage – depending on your keystone level. With only three bosses and a time limit of 30 minutes, your visit is not only quite short, it is also not particularly difficult.

On the beta servers, the Ruby Lifepool was one of the easiest Mythic Plus dungeons. However, that may well have changed in the meantime. On the other hand, what will hardly have changed is the path you take through the dungeon. There are few opportunities to deviate from the prescribed route, although we are sure that the absolute high-end players will still find one or the other very “strange” route and then not go through it from front to back.

WoW Dragonflight: In this game tip we will show you how to train a pure collector and tell you where the nuggets are hidden!

Wow: Mythic Plus in Season 1 – Dungeons, Loot, Affixes (all info)

On December 14th, the Mythic Plus dungeons will finally start in WoW: Dragonflight. We have everything you need to know at a glance.

Pull a lot? Only with enough control effects!

To start, we’ll work our way through the lower levels of the Ruby Lifepool. A lot of trash is waiting for our heroes. We are particularly careful not to pull too much. Many of the mobs don’t look dangerous, but they’re sly old dogs. Above all, the whirlwinds that are distributed on the ground by the primeval colossuses can lead to death in combination with other effects, as they are quickly overlooked. Of the TECTONIC BLOW of the various earth shapers can only be interrupted with a stun and causes immense damage to all surrounding players. You should therefore only pull more than one group if you have several stuns in the group and use them in a coordinated manner. If all players stun the first spell and the others get through unhindered, you’ll be saying goodbye to a good time after just a few enemies. The ice shield, which some of the mobs distribute and which makes the opponent in question immune to control effects, doesn’t help you much either.

The mini boss at the end of the hallway looks more dangerous than he actually is. He throws out a few hits, storms around, and hits the tank hard. Better pull him around without other mobs around so you can focus on dodging his attacks. If you let it hit you, you usually don’t get up again.

Melidrussa: Area damage at its finest

Melidrussa is a boss who has a manageable number of skills, but can at least put your healer to a hard test. Because it hails a lot of area damage on your group, which has to be healed. Melidrussa shoots small vortices, which then form ice crystals. Both the impact and the crystal deal high damage, so don’t get caught. 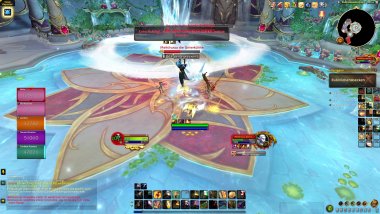 
A player will also COLD STORM proven. The one carries the blue circle to the outside and then all players run against the pulling in order to avoid the greatest damage. Melidrussa regularly summons a horde of puppies, which you quickly eliminate with your cooldowns before they stack the removable debuff too high and thereby stun the player. Finally, the boss gives himself a shield and deals increasing area damage until you break the shield.

Fire, so much fire!

After a short flight up you have to decide whether you prefer to go left or right. We recommend you the way to the left, so you can immediately attack the mini boss Thunderhead. Otherwise, at some point, he will start to wander and, in the worst case, intervene in the fight at a very inopportune time. The dragon distributes debuffs that cause a lot of damage. Uses defensive cooldowns and the healer dispels one of the debuffs and then heals the party. 
For the second boss to become active, you must defeat all four Blazebound Destroyers. These cause area damage and give players a nasty debuff that explodes at the end. A little tip: Not only players, but also opponents who are in the red circle when running out are thrown into the air. This can help you to interrupt even more spells. Because the ember weavers work regularly FLASH. Each one of them is not dramatic, but in large quantities they are deadly. By the way, as soon as the destroyers die, you should leave the big circle of the explosion.

On the other side of the ring another mini boss is waiting for you. Flaming Gold has fire breath forward and deals increasing area damage once it falls below 50 percent health. You should only beat him below this mark when the surrounding opponents have blessed the time.

Kokia Firehoof deals a lot of area damage and has some dangerous attacks up its sleeve. Keep them away from any trees or walls. Because she summons a rolling chunk of fire that rolls away from her and explodes as soon as it hits something. He causes immense area damage around himself, which is why he should do it far away from your group. He also leaves fire areas from which you have to go out. 
But since the area is huge, that shouldn’t be a problem. At 100 energy, she also summons an add that you have to kill. When it dies, it explodes like the trash mobs, leaving patches of fire in its wake. Since the add appears on a player, position yourself wisely so that you don’t block your way out and suddenly find yourself trapped between two fire surfaces.

See also  4Players.de: On our own behalf: What rhymes with Heike?

Area damage from hell… or rather from heaven 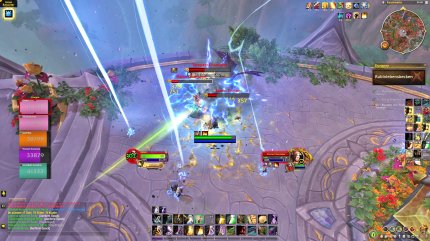 On the way to the final boss, your healer will work up a sweat again. The mini bosses work LIGHTNING STORM, which deals a disgusting amount of area damage. Don’t hesitate to use defensive cooldowns or support your healer with healing spells of your own. Better a little less DpS than a dead group.

Erkhart Stormvein and Kyrakka featured one of the toughest boss fights in the Dragon Isles early in Alpha/Beta. After countless nerfs, the fight is still the hardest of the dungeon, but easier than many other encounters in the Dragonflight instances. At the beginning of the fight, you deal with the bosses individually, but as soon as one of them drops below 50 percent, the rider jumps on his dragon and they fight together. By the way, we recommend that you target the dragon first and knock him down as quickly as possible, as he has extremely nasty attacks. 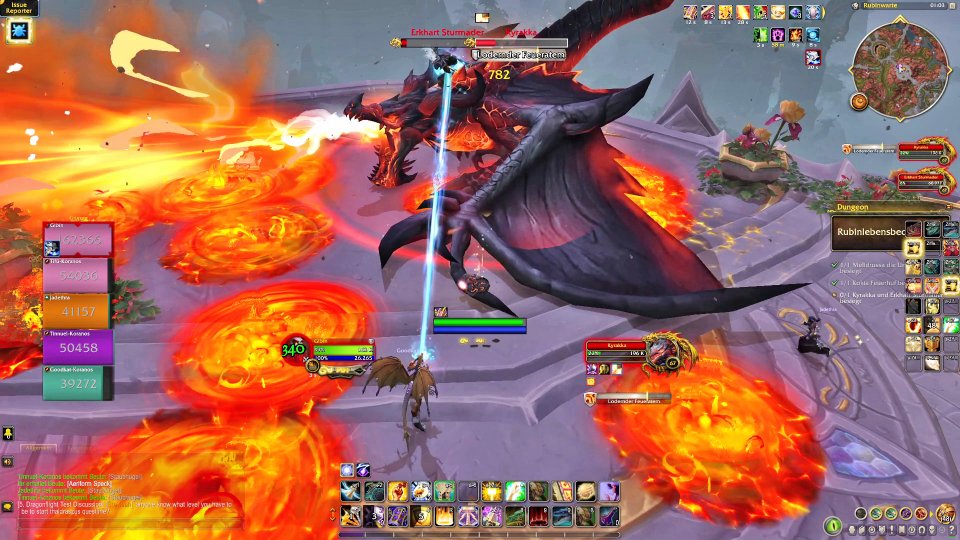 
With INFERNOCORE it deals high damage and leaves areas of fire under the players. This can quickly become annoying and makes your healer sweat. Especially since he also has a flame breath that you have to dodge, since he also hits you with it INFERNOCORE – Stacking penalized. Storm vein, on the other hand, lets you push it in other directions over the platform with its winds and annoys healers and magic classes INTERRUPTING DOWNBURN. When he ends this spell, all players are interrupted and silenced for four seconds. Incidentally, the healers should also remove the debuff on the tank regularly so that the front-line fighter is not knocked out of his shoes.