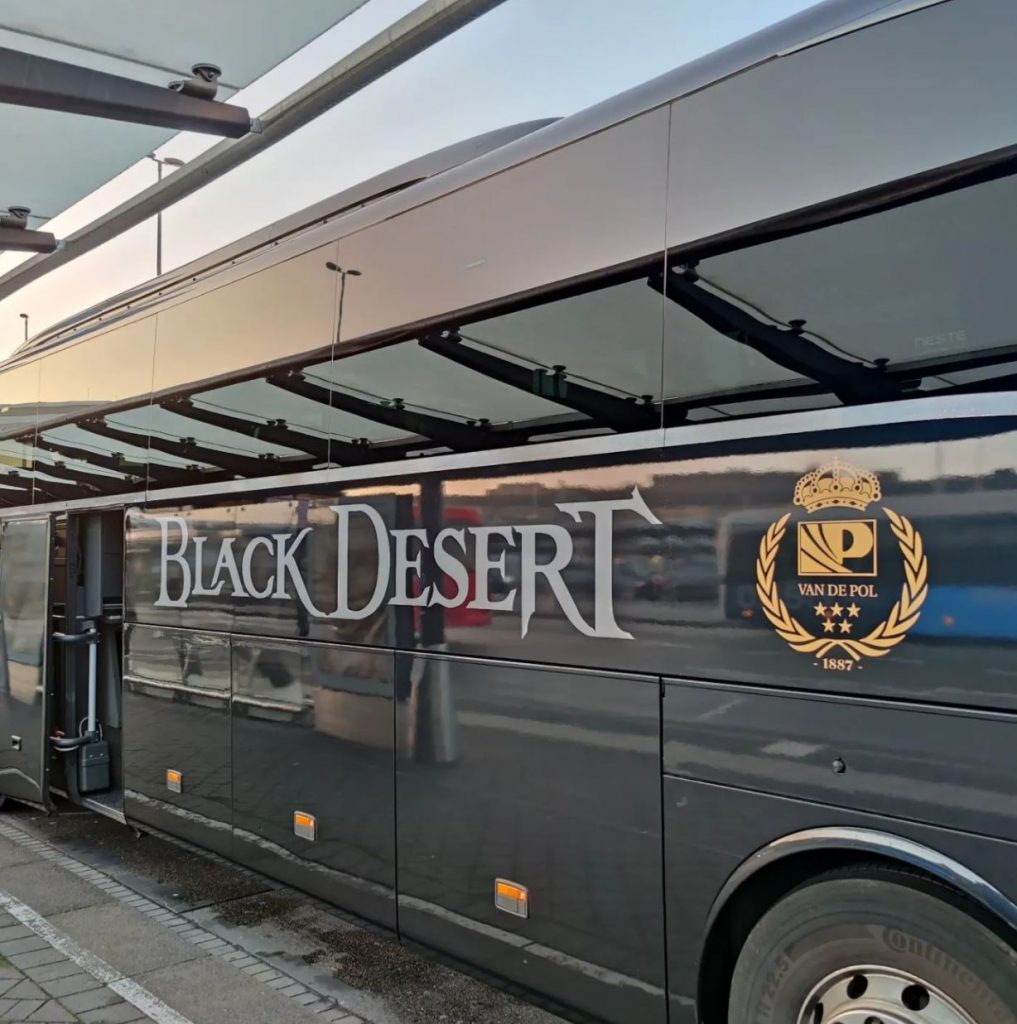 On December 9th, the Black Desert Online community event “Voice of Adventurers” took place for the first time in Europe. MeinMMO author Mark Sellner attended the event in Utrecht and was able to speak to Lybee Park, Head of Development in Europe.

Black Desert has been a big MMORPG for years. This is also the case for Germany and Europe in general, but the developers of BDO, Pearl Abyss have only been working on actually pursuing this for 2 years.

Because so far, all relevant events for the MMORPG have not taken place in Europe or America. However, that has now changed. On December 11th, for example, there was the first Calpheons Ball in America, an event with many new announcements for the future of Black Desert.

Two days earlier, less big and relevant for all players, Pearl Abyss hosted the Voice of the Adventureres event in Utrecht, Netherlands. It was less about new announcements and much more about bringing people from the community together.

It is the first event of this kind in Europe, apart from the fan meeting at gamescom.

Best of all, it was completely free for participants. There was a draw in advance and 90 Black Desert fans were drawn and invited to the event at Kasteel de Haar, the largest castle in the Netherlands.

I too was invited to the VOA by Pearl Abyss and had the chance to speak with Lybee Park. She is CEO of Pearl Abyss in Europe and was also present at the event.

The last new class, Drakania, also appeared in the conversations:

Community was the absolute focus

Shortly after my arrival at the airport in Amsterdam, I already noticed that Pearl Abyss did not let the event run rags. Because right in front of the main entrance of the airport there was a big, black coach with the inscription “Black Desert”.

He wasn’t just waiting for me there, but also for numerous other fans, who were slowly arriving. Pearl Abyss had organized two such buses, which took the shuttle from the airport to the hotel directly to the location.

Already in the approximately 40-minute bus ride to the event location, it became clear that there was a lot of passion for the game. Some fans even wore disguises and of course there was no theme other than Black Desert throughout the bus.

What I particularly liked about it, and also about the entire event that followed, was that the developers and the Pearl Abyss team were never separated or on their own, but were always in the middle of the community and always the contact persons for the fans – great!

The event itself was then divided into three rooms, all of which were on the large estate of Kasteel de Haar. A guided tour of the castle was also included. The first hours of the event consisted of a casual get-together and chatting.

Each person received a personalized goodie bag, which included, among other things, the players’ business cards. A kind of trading game quickly began and people tried to swap cards with each use.

Game is also the next keyword, because there were plenty of them. In addition to a quest log, in which there were various tasks for the fans to complete for which they could collect rewards, there were also several games designed directly by the developers.

There you could, among other things, compete with a game master in a PvP duel, take part in a pub quiz or have beautiful polaroids made of you in front of a green screen. Snacks and drinks were also available free of charge for all participants throughout the event.

Pearl Abyss also hired professional cosplayers to attend the event. They wore typical Black Desert cosplays and were always available to take pictures with the players.

Dinner in a knightly atmosphere

At the end of the day, we went back to the large main hall of the castle, which this time was equipped with tables and a projector. Not only a luxurious three-course meal awaited there, but also a surprise raffle in which fans could win a gaming PC, among other things.

This was rounded off by an Italian quintet, who sang a few songs from the Black Desert soundtrack, which created a truly sublime feeling in a chivalrous castle.

After the meal there was another goodie bag for everyone and the Black Desert bus drove back to the hotel. It was a truly successful day for the community. One of those present told me that the event was his highlight of the year because he was able to meet his guild leader for the first time, who had been like a little brother to him for two years.

Everywhere you saw beaming faces and also the feedback after the event on reddit is extremely positive.

Between the activities and dinner we had the chance to talk to Lybee Park, game master Nox and Rick van Beem, Pearl Abyss’ PR director in Europe.

See also  What do the computers of the PCGHX community look like? Here the users show it! - Memory

German fans are to blame for the male archer

Black Desert was released in Europe back in 2016, but it still took a long time for the culture surrounding the game to reach us. With the VOA, the first community event only came to us 6 years after the release. A period in which many MMORPGs are already losing the interest of the masses.

Black Desert doesn’t seem to have this problem though. So the first thing I wanted to know from Lybee was why that is and what makes Black Desert so special from her point of view.

I think it’s our engine. It allows our developers to quickly create new updates and thus new content for the game. At launch, it was our large, cohesive open world, unprecedented in an MMO. And of course the character editor and the action combat system. So there are many systems, but it all works because the engine builds the foundation.

And this freedom that we have to update the game in very timely intervals and also to react quickly to community feedback. That explains not only the very good launch, but also the success over the years.

I was then interested in whether something ever made it into the game that the developers actually didn’t want in Black Desert. Or at least something that didn’t necessarily fit the MMORPG’s vision.

And indeed, the German fans are to blame for the fact that this happened.

I can’t think of anything spontaneously if there were anything but the male archer. People asked a lot about it. And actually it came into play mainly because of the German fans, if I can put it that way. We featured the male archer back in the beta, but actually developing that class wasn’t our priority.

But after very deep conversations with our German fans, we dug it out again. So yes, that was a point where the fans had a really big impact on the developers and managers.

The still small team in Amsterdam was almost completely represented at the event, which together with the fans made for a great group photo:

“I adore our European fans”

I also wanted to know why it took a full 6 years to get the European community involved with an event of this nature, especially when the German fans of Black Desert had such a big impact.

I also made reference to the new Pearl Abyss location in Amsterdam, its purpose and whether Black Desert would like to focus more on the European market in the future.

We opened the Europe location as Black Desert transitioned from Kakao Games to ourselves, but during the pandemic. We love offline events and actually meeting people in real life. We love hearing their stories and feedback in person. But we couldn’t do that during the pandemic. In fact, we’ve been planning the VOA for two years.

At gamescom this year we had the opportunity to set up at least small places to hang out together. It was a great experience and we learned how to implement these meetings better. That gave us enough confidence to implement the VOA now. Of course, Europe is a super important area for us, especially Germany, that’s where our biggest fan base for Black Desert is [in Europa].

Lybee went on to explain why she came all the way from Korea to Amsterdam to fill the position of CEO for Europe in the first place. Apparently we are just in love with details.

I flew all the way from Korea because I have a crush on our European fans. They enjoy the game a bit differently than our Asian fans. Asian players often think very practically and find the most efficient solution for a certain thing, but European fans, I just admire them.

You will find all the different little things and details in Black Desert, hidden gems, some of which the developers themselves have already forgotten. It’s the way our fans enjoy the game that fascinates us and that’s why we love hearing the stories of our fans.

And now, of course, we also want to give something back for inspiring us for so long and giving them something that shows them that the fans here in Europe are loved too. We are proud of the large fanbase here that supports us.

Finally, I was of course still very interested to know whether we as fans in Germany can expect an event like the VOA soon. It hasn’t been officially confirmed to me yet, but the event went very well for the Pearl Abyss team, as Rick assured me.

It is therefore conceivable that events of this type will take place more than once and then possibly in Germany as well. We will of course keep you informed about this.

That would certainly make our editor Alexander Leitsch happy, because for him Black Desert is clearly one of the 15 best MMORPGs currently available.