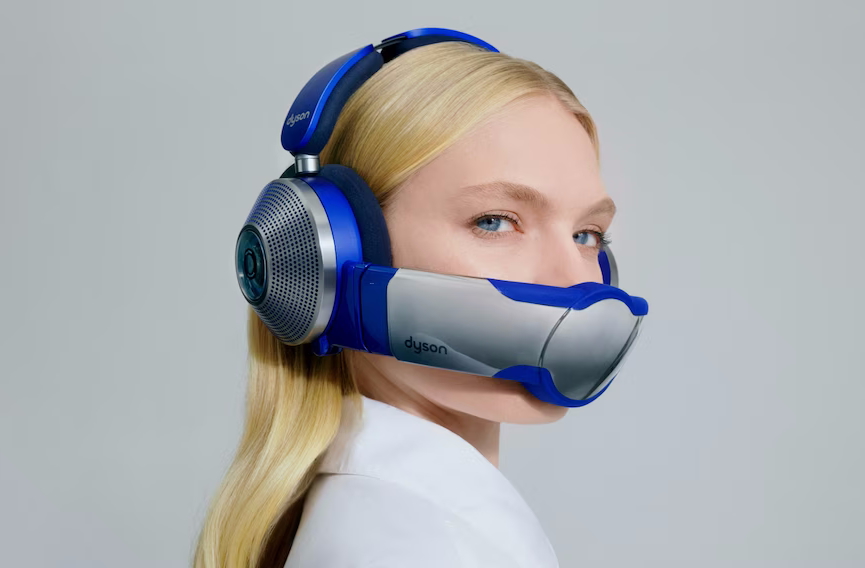 The electronics manufacturer Dyson should be known to most people mainly from their vacuum cleaners. Now, however, the company surprises with an adventurous invention: a headset with an air purification function. But the price has it all. You can find all information about this in this article.

Dyson should be known to most people mainly because of their vacuum cleaners. It was therefore surprising when the Danish company first announced on March 31 of this year that they would also be selling noise-cancelling headphones with an air purification function called the Dyson Zone.

Due to the timing of the announcement and the device’s futuristic and at times somewhat… odd-looking appearance, quite a few considered the Dyson Zone to be a premature April Fool’s joke (via PC gamers). This is quite understandable, given that the device’s appearance is also reminiscent of SciFi games such as Mass Effect or Star Wars: Knights of the Old Republic.

At least since the proud price of the Dyson Zone was announced a few days ago, it is clear: the device really exists and will be on the market as early as next year.

You can watch the Dyson Zone announcement video here:

This is how the Dyson Zone came about

Why was the device developed at all? Admittedly, at first the idea of ​​a vacuum cleaner manufacturer suddenly developing its own headphones really seems a bit absurd. However, if you deal with the concept behind the Dyson Zone, the whole thing becomes a bit more understandable.

Dyson believes that there are other forms of pollution besides household dust that they want to counteract in the future. The announcement video of the Dyson Zone therefore says:

When you are at home, you are in a protected space. But as soon as you go outside, you are confronted with all these different types of pollution: dust, gases, volatile organic compounds, pollen. But noise pollution is also a pretty big problem. Airplane noise, construction site noise – how do you protect someone from this when they are on their way to work? The idea of ​​this machine is to do just that.

So, after six years of research and over 500 prototypes, the final Dyson Zone is a product that lives up to the company’s expectations. On the homepage, Dyson even advertises that its entire 30 years of air filtering expertise can be found in this device (via dyson). However, this also makes it clear that the headphones were not designed as a countermeasure for the pandemic and will therefore not offer you sufficient protection against viruses on their own.

The Dyson Zone delivers you “pure air and pure sound”

What functions does the device have? The Dyson Zone combines the technologies of several different devices: Bluetooth headphones with active noise canceling technology and an air purification device are connected. In addition, the Dyson Zone can be connected to the MyDyson app for more control, which will then, for example, provide you with a real-time overview of the pollution and noise levels in your area (via dyson).

The device’s battery has been optimized for a longer listening experience, giving you up to 50 hours of audio with active noise cancellation and up to 4 hours of air purification on the lowest level with active noise cancellation (1.5 hours on the highest level). The Dyson Zone is charged with a USB-C cable, for which the input is on the left earpiece.

The group also praises the excellent sound experience of their headphones on their website and emphasizes that they were developed for minimal distortion. That’s why Dyson’s engineers took a scientific approach on their first foray into audio engineering (via dyson).

What does the air cleaning bracket do? The real highlight of the Dyson Zone is the contactless visor, which ultimately gives the device the SciFi look and through which the cleaned air is guided and distributed to the outside. This can be removed at any time, turning the device into ordinary over-ear headphones. After about a year, the electrostatic filters, which capture up to 99 percent of particle contamination down to 0.1 microns in size, then need to be changed.

According to the manufacturer, the Dyson Zone is particularly suitable for people who live in urban areas and people with allergies.

What does the device cost? Due to the many built-in technologies, the Dyson Zone has a proud price that has recently become known. Last but not least, thanks to the futuristic-looking air cleaning bracket, you have to shell out around €870 for the device, which will be released in 2023.

New gadget aims to take care of your most important gaming tool: your hands

See also  In Warzone 2, dead players reveal your position and there is nothing you can do

What do you think of the Dyson Zone? Do you think the device is chic and would you even buy one of these headphones yourself, despite the price? Or would you feel stupid doing it on your daily commute?

Write it to us in the comments!

Not only Dyson presents interesting and bizarre gadgets for users. So Razer had presented a special mask that should be aimed primarily at gamers. Because “Project Hazel” should offer some special features such as RGB lighting.

Razer brings the “smartest mask in the world” with RGB lighting