Viewfinder is my secret highlight of the Game Awards 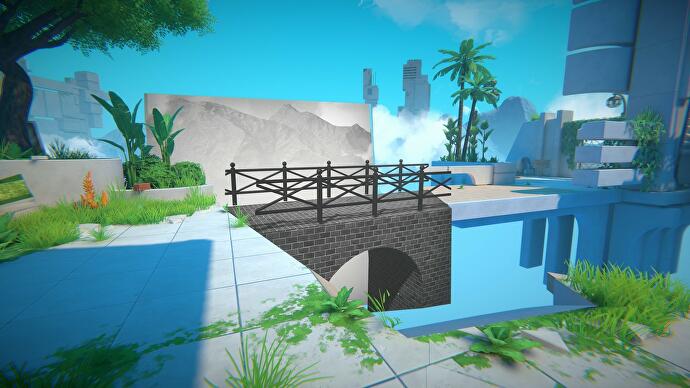 “Secret highlight” because of course there are also the announcements of Death Stranding 2 and, for me, Judas in particular, from whom I have high hopes after Ken Levine’s long search for new playful ideas. Not to forget the never-ending speech by Christopher Judge, which almost single-handedly would have been a full-length program.

But there was also this little highlight that also made me curious: Viewfinder from the British Sad Owl Studios (SOS). Now this doesn’t seem to be much more than one of the many puzzle games in which you find a way to the exit by cleverly rearranging the environment. But what fascinated me about it is the way you do it.

Because you don’t just build a bridge over an abyss, for example. Instead, you first photograph a bridge somewhere, then hold the photo from the right perspective over the non-existent path – and there is already a real bridge there. The impressive thing is the effect when you have “fixed” the photo in the room and move away from it or walk around it. Then the two-dimensional image suddenly gains depth.

I love it when creative video games enable something that not only physically exaggerates reality, but pushes the boundaries of our reality. The unjustly never continued crush! on PSP or its 3DS offshoot Crush 3D, this was done in a very similar way, except that you could always turn a three-dimensional level into a two-dimensional platformer level and vice versa. Check it out if you haven’t already.

And here there is also this effect that something that is undoubtedly flat is suddenly given plastic depth, with which one can also interact. Class! I hope SOS uses its concept for imaginative puzzles that will turn heads even more than the physical impossibility already does. After all, you will use photos as well as drawings, screenshots, paintings and posters to make real objects out of them, and I’m particularly excited to see how much freedom you have. Is there always only one solution or is it allowed to experiment wildly? And will it even be possible to transport images within images?

Viewfinder is not only now coming to the light of the public. Game Director Matt Stark presented a few years ago what he is planning and how he wants to implement it. He wrote on Twitter: “When the player takes a picture, I duplicate the environment […] and cut out the grid (the polygons that form the environment, editor’s note). […]. When you place it in the world, I then cut out the surrounding grids to make room for the photo.”

The narrative behind the fantastic photography is not yet known. The current press release only talks about exploring a beautiful world full of secrets. For the moment, however, that’s enough for me, because a clever idea can carry a puzzle game almost single-handedly. PC and PlayStation 5 players will find out exactly what the outcome of this is in the coming year, which appears to be a limited-time exclusive.