The Academy was the last dungeon the developers completed for Dragonflight. And you noticed that in the test phase in many nooks and crannies.Academy of Algeth’ar

Number of bosses: 4
Time limit: 32 minutes Not only was the amount of bugs high, the balancing was also very expandable. In return, you can ally yourself with one of the dragon swarms right at the start and then get a suitable buff.

All you have to do is talk to the appropriate NPC before moving left to Vexamus or straight ahead to the Overgrown Ancient. However, you can only have one of the buffs active at a time. The following buffs are available on recruiters of the same color:

The MMORE 179 with guides for Season 1 of WoW: Dragonflight is now available – to match the launch of Raid and Mythic+!

In the guide to the brewmaster monk at level 70, we show you talents, how to play and values ​​for the monk tank in WoW: Dragonflight.

The way to the first boss is unspectacular. Dodge the vortices, circle away from the group, and don’t let the wyrms’ head-on attacks hit you. 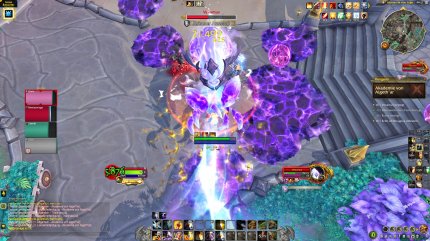 See also  Leon Machère vs. Kaan Yavi in ​​the face-off: Even before the boxing match, rags were flying


Vexamus as a boss causes high area damage at 100 energy and quickly creates puddles under you, which is why you have to move constantly during this time. So that this doesn’t happen too often, you should catch as many arcane orbs as possible. These slowly move towards the boss and give him 20 energy when they reach him. In addition, the group suffers area damage. If you catch a bullet, only you take damage and there is no energy for the boss. However, you get a debuff. You can only intercept one ball per player per round. Now carry the circles outwards from which puddles are formed and don’t stand in front of the boss, then nothing can happen to you.

Meaner than some bosses 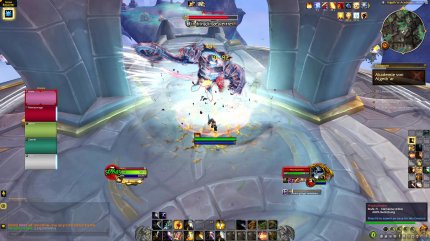 Between Vexamus and the second boss, Kraas, there are a few more mana worms and, above all, the sentry – a small but nasty mini boss. This causes hurricanes to appear that stun you when touched. It wouldn’t be so mean if he didn’t keep making a huge circle appear around him. If you don’t get to a distance of about 45 meters in time, you will suffer massive area damage, which is almost fatal on its own. Those who survive this usually see themselves sailing down the platform, because the damage also pushes you far away.

Kraas: He wants to play ball

With the OVERWHELMING BUST, a frontal attack in a random direction, Kraas will try to push you off the platform. If he catches you, you will be blown up again, but you will lose valuable time on the boss. He also interrupts all players with his DEAFNING SCREAM and deals damage to them. Stands distributed so that you don’t also get the damage of the other players (four meter range). 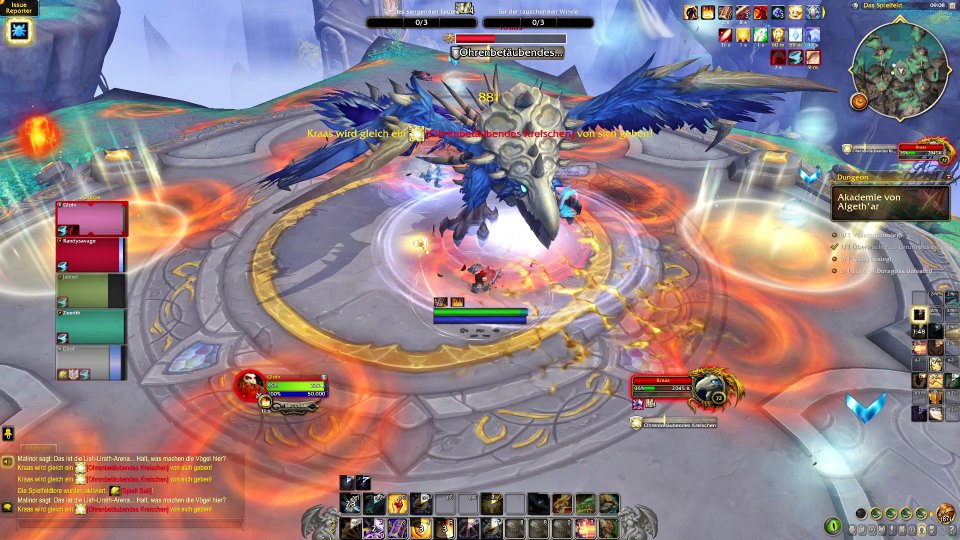 
But the most important mechanic is playing the ball. Balls keep appearing at the edge of the platform. If you run over them, you collect them and can then throw them into the right or left gate with your ExtraActionButton – depending on where you are.

If you throw three balls into the gate of scorching fire (right), it starts FIRESTORM. You must now constantly dodge areas of fire that stun and almost kill you, but Kraas is also stunned and takes 75 percent more damage for 12 seconds.
If you throw three balls into the gate of the rushing winds (left), start STORM POWER. You are constantly being blown through the area and have to avoid eddies. Absolute hell for all magic classes. In return, you can collect wind particles that increase your speed by 45 percent and your movement speed by 50 percent for 20 seconds. Also, while the buff is running, you will no longer be pushed back by the winds.

Overgrown Ancient: Does that count as a forest?

There isn’t much trash waiting before the third boss either. Bash the plants and dodge the green explosions. But pay particular attention to the distributed flying dragonflies. They distribute a nasty debuff that can quickly become a problem. 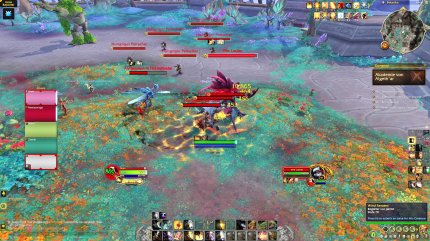 
The Overgrown Ancient has few abilities. The big tree will summon a medium tree that will try to heal the big tree. break HEALING TOUCH and quickly knocks out the add called Branch of an Ancient. But even more important is GERMINATION. The players drop a seed at their position every second for four seconds, from which you have to get out immediately. However, you should place these seeds as close together as possible. Because these Lasher Seeds can and should be bombed away. A short time later, the boss casts a spell and the seeds turn into full-grown whippers who attack you. The more you break beforehand, the fewer will attack you later. 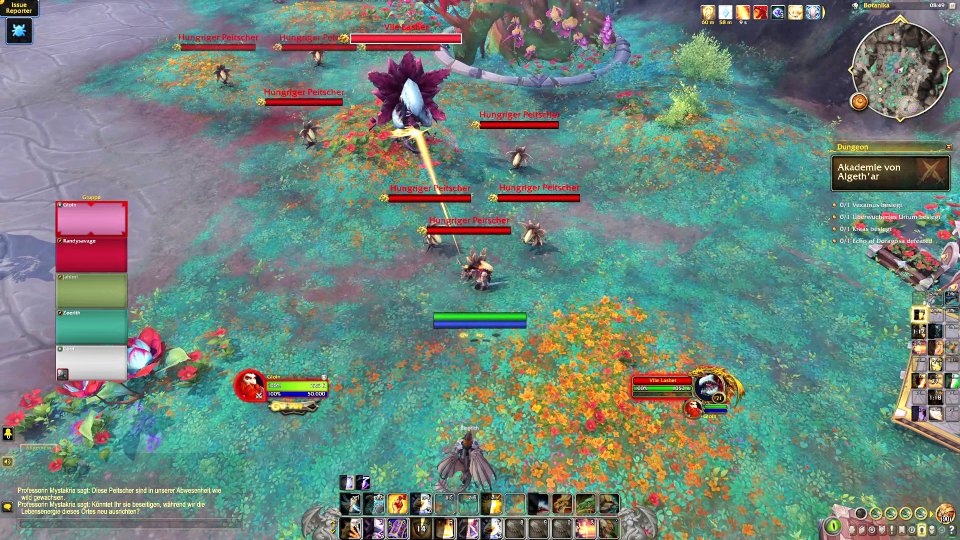 Before the final boss, there are still a few trash packs that are significantly more dangerous than the previous ones. There were only four different species, but each has a dangerous ability.

Then there were the paramedics. These hit one of the opponents HEAVENLY SHIELDwhich can greatly prolong the fights. 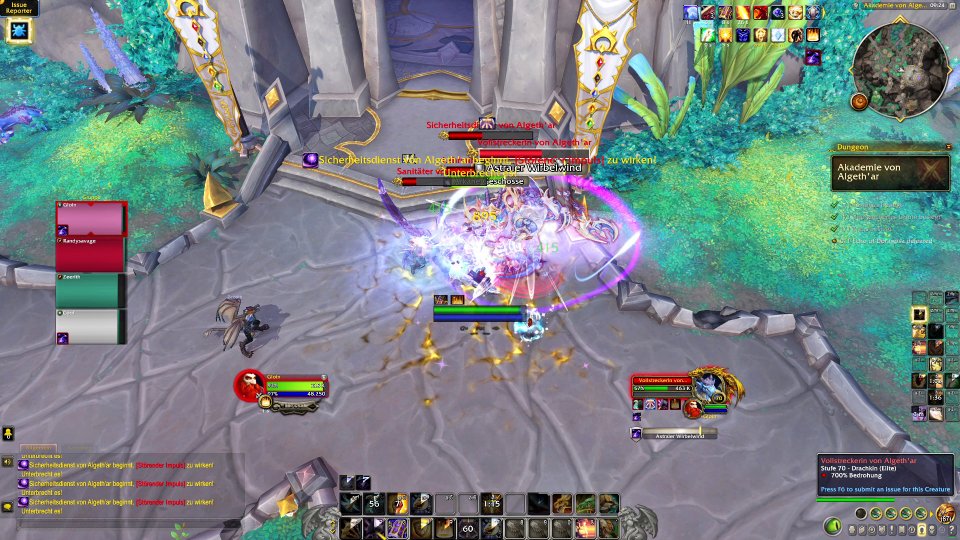 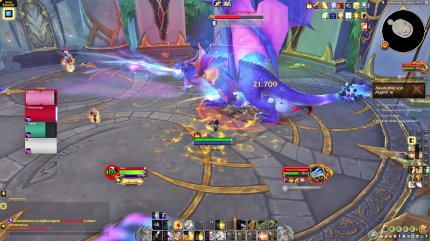 fighting the Echo of Doragosa is all about the OVERWHELMING POWER. Whenever you are hit by one of Doragosa’s abilities, you gain a stack of this debuff. This increases your damage caused by five percent per stack. However, if you reach four stacks, you lose the buff, suffer high damage and leave a puddle on the ground, from which arcane clouds waft again and again, which you have to avoid. In the best case, you quickly get three stacks and then don’t let anything catch you anymore. Unfortunately, it’s not that simple. Because there are some random skills.

ARCANE MISSLES deal high damage to a random player, ASTRAL BREATH is a frontal attack in a random direction that you and players can dodge ENERGY BOMB should run away from the group so that they only damage themselves and not all other players. Besides, you have to POWER VACUUM keep running away from the boss as he tries to drag you to certain death.