WoW bans tailors for tailoring – the players are angry and disappointed 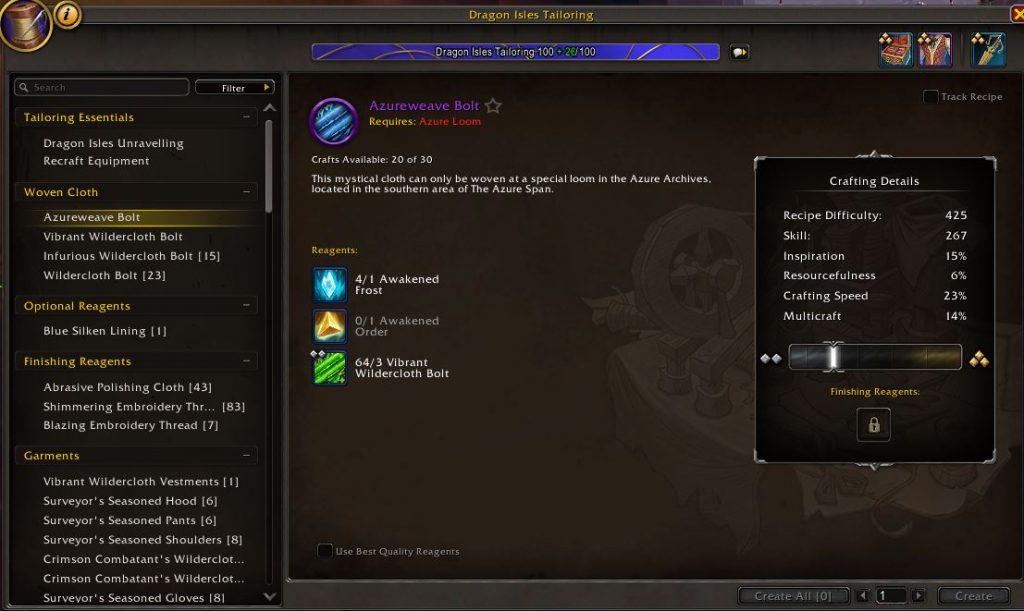 Numerous tailors have been banned in World of Warcraft. They feel unfairly treated – because they didn’t even know that they were using an exploit.

A wave of bans in World of Warcraft hits craftsmen of a special guild particularly hard. Many tailors are probably taking a vacation from the Dragon Islands for a while because Blizzard has blocked their accounts for up to a week. The reason for this: An exploit that many didn’t even know was one.

What is this “exploit”? In Dragonflight, tailors can craft two different bolts of rare cloth depending on their specialization. These are Azureweave Bolt and Chronocloth Bolt. These are basically two of the luxury resources that tailors need to make good gear or the best bags.

Many tailors were now able to produce these bolts of cloth much more frequently than Blizzard intended.

The reason for this was that seemingly random events were incorrectly resetting the crafting cooldown. Sometimes it was enough to enter a dungeon or simply a group, such as a world quest.

As punishment for using the exploit and making these bales far too often, Blizzard has temporarily suspended numerous accounts – in many cases there is now a 7-day break.

Why are the players mad? Many affected players are angry at Blizzard because they simply did not know that they were using an exploit. They claim they had no idea what resets the cooldown or that they thought it was related to a deeper specialization in Tailoring.

Tailors can produce the bales mentioned several times, but there is a cooldown on each production. This in turn can be reduced by further specialization, although the description here is not to be understood unambiguously. For example, the specialization talks about “strengthening your connection to the blue dragonflight, reducing how quickly you consume the magic to craft Azureweave Bolts.” The lack of clear figures here only makes the problem worse. Because many simply assumed that their specialization ensured that they could produce bales more often.

Or to put it another way: Many had no guilt about their “crime” because they simply did not know that it was a bug or an exploit. After all, this error could simply occur during normal play – for example after visiting a dungeon.

The time of the ban is particularly bitter: What is particularly annoying is that Blizzard has now pronounced the ban at the start of Season 1. Many have already been excited to start the Vault of Incarnations raid and the season of Mythic+ dungeons today. Many guilds will probably have to do without their cloth carriers these days if Blizzard does not mitigate or withdraw the penalties.

What do you think of these punishments? Ignorance does not protect one from punishment? Or is it not the fault of the tailors who accidentally took advantage of this?