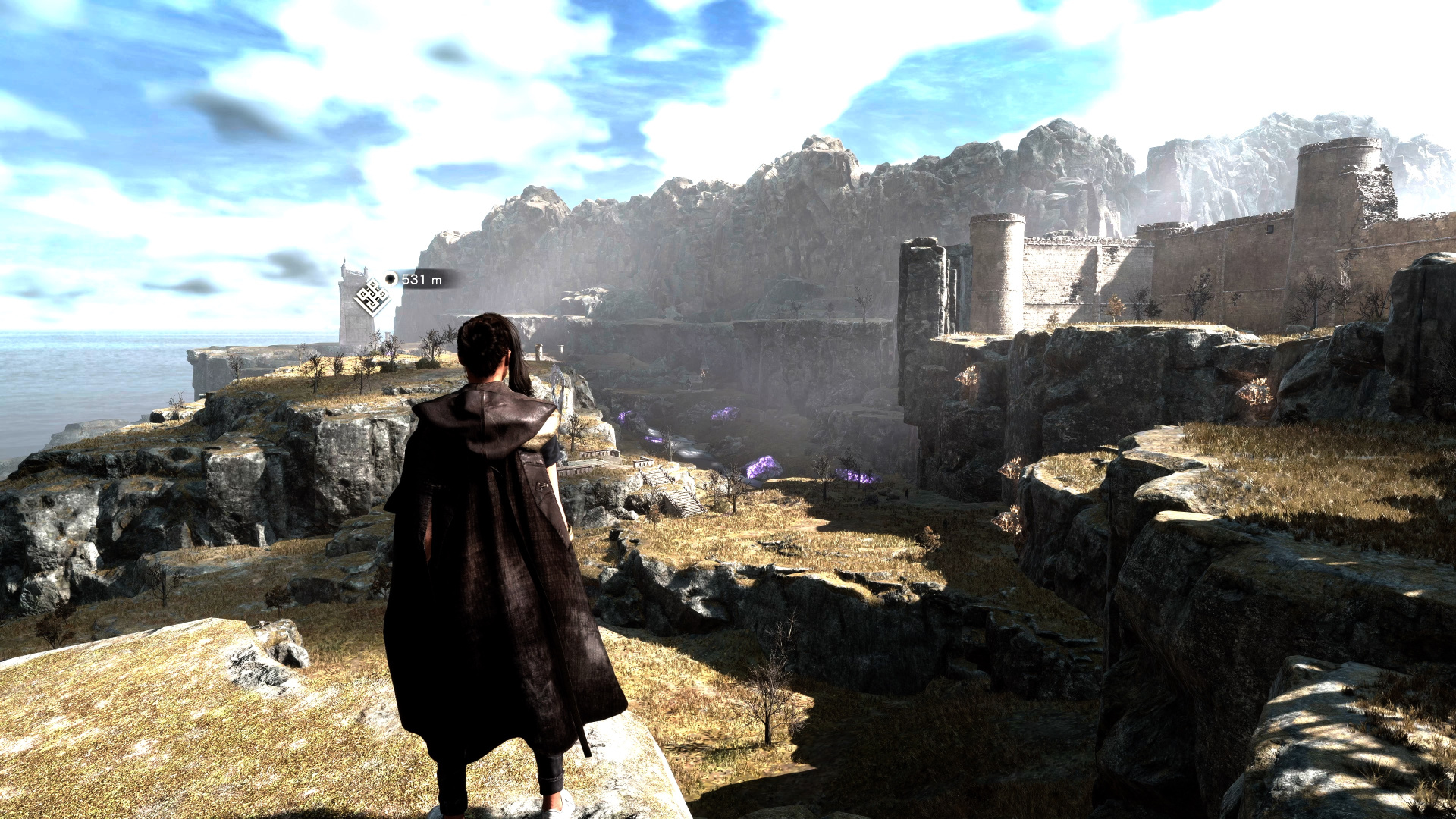 So far I’ve primarily dealt with the gameplay, but the story part hasn’t been too short either. Arriving in the last city of men after the prologue, Forspoken became very cutscene-heavy for a while. Frey is uncomfortable with the Supreme Council there and is imprisoned. However, a resident helps Frey to escape, including a small sneak section, which does not establish any stealth mechanics, but is very scripted so that you are not in the field of vision of guards at the right moment (however, there is the possibility of surprising opponents from above for bonus damage).

Your breakout helper will also become your first quest giver. You should recover her father’s research from the outside world, in return she would help you to open a portal back home. But before I return to the outside world, I can talk to townspeople. At first I thought speaking to a bard would trigger a quest, but seeing the dialogue that followed seemed to complete it. It seemed strange to be walking the streets unmolested right after the eruption. It’s not that Forspoken isn’t trying to capture that at all. Addressed NPC guards say they do not belong to the faction of council members who want to put Frey straight back in, but the heroine obviously stands out there and is immediately recognized as the stranger by some civilians. It doesn’t seem credible to me that I’m allowed to roam around the hub so early.

On the other hand, it is credible that Frey does not cooperate with Reif at the beginning, but always chokes him off. However, this dynamic in the tutorial is a bit exhausting. But even there I found the bickering between the two funny at times and after the initial difficulties I always found the chemistry between the two charming, for example when Reif asks in a fight who I intend to hit with my wild banging around and Frey just calls out “Well, that asshole there! “. The companion often speaks up in other ways too, for example when I enter one of the witches’ cottages to rest. However, it remains to be seen whether the sayings in battle will not be repeated too quickly.

In terms of dramaturgy, the story turned on after not too long and the situation in the city is coming to a head, giving Frey a credible motivation to take on the aunt of war – one of the four matriarchs who once saved Athia and now with her seem to be in league with the plague. As a boss, however, she was less of a challenge than her hordes of warriors, who were resistant to my only available earth element. But perhaps Forspoken wanted to suggest in this way not to choose the direct route to the Tanta’s base, but to try out the alternatives that Frey spies on a map. However, this protracted the battles against the enemies (even on one of the optional routes). In return, defeating them gave me the element of fire, whose attacks were noticeably different from earth-type attacks, and also gave me the ability to pull myself up on ledges and flagpoles, which I use extensively right on the way back from their area.