Jackpot! And then? Germans would save and invest 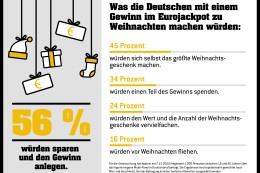 Munster/Essen.
For the 600th drawing of the Eurojackpot, a whopping 21 million are in the pot. According to a survey, most Germans would save and invest the money.

When the 600th Eurojackpot drawing takes place tomorrow, the jackpot will be around 21 million euros – an unbelievably large sum. What would the potential winners do with it in time for Christmas? The market research institute Appinio interviewed the Germans on behalf of Eurojackpot as part of a representative survey.

Even at Christmas, the Germans live up to their reputation as world champions in savings: the majority of respondents would save and invest the profits (56 percent). The 18 to 24 year olds in particular agree with this statement (65 percent). In second place for almost half of all those surveyed is the desire to fulfill a long-awaited dream and thus give yourself the biggest Christmas present (45 percent). The 55 to 65 year olds in particular associate millions in profits with the fulfillment of long-awaited personal dreams (49 percent).

Despite the currently difficult social situation in times of the Ukraine war, energy crisis and inflation, most of those surveyed are not giving in to escapism in the face of potential millions in profits. Escape Christmas and say goodbye to the Caribbean, only very few would do that (16 percent), but most likely the 25 to 34 year olds (20 percent).

Interestingly, more people would donate part of their profits to a social project (34 percent) than multiply the value and number of Christmas gifts for their loved ones (24 percent). The state lottery companies repeatedly encounter the high level of willingness to donate in discussions about the support of winners. A nice thought to share primarily with those who rely on outside support. This particularly social attitude in the face of millions in profit would be taken by the 25 to 34 year olds above all other age groups (40 percent).

For the study, Appinio interviewed a total of 1,000 people between the ages of 18 and 65 on December 7 of this year via Appinio’s own mobile panel in Germany. The results are representative weighted according to age and gender. Several answers could be selected in the survey.