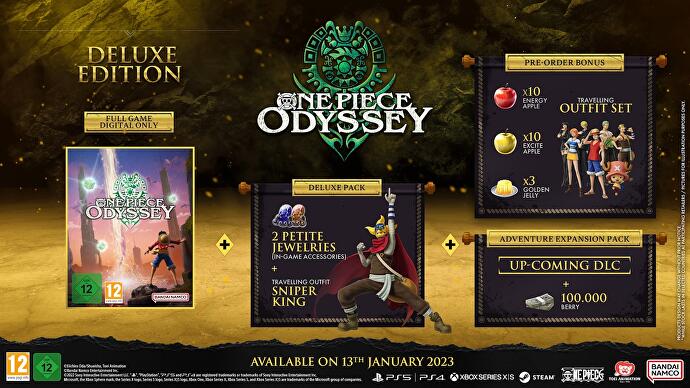 One Piece Odyssey will be released on January 13, 2023 for PC, PlayStation 4, PlayStation 5, Xbox One and Xbox Series and will take you deep into the minds of the straw hat gang. The new trailer is about Marine Ford and Dressrosa.

Memoria is a place made up of the memories of Luffy and his band of pirates. The crew must regain their lost powers in this emotionally charged world.

In previous trailers we already saw that the game takes you to Alabasta and Water Seven. As already mentioned, you can also look forward to trips to Dressrosa and the Marine Ford.

The Marine Ford in particular is sure to weigh heavily on Luffy’s heart, as this is where the brave pirate fought to save his brother, Portgas D. Ace, from the hands of the Navy. In Dressrosa, the Straw Hats will face De Flamingo, fighting alongside Sabo and Trafalgar Law.

More on One Piece Odyssey:

One Piece Odyssey will be one of the first games 2023: release date confirmed

There is an interesting twist though, as the events of Dressrosa and the Marine Ford will play out differently in Meoria than you know from the manga or series. A new end to the two arcs is therefore possible.

At the end of the trailer, Bandai Namco once again introduces the standard and deluxe editions of One Piece Odyssey. If you pre-order, you will receive an outfit set with the standard version. The deluxe version also includes the Sniper King outfit, additional cosmetic items and 100,000 berries.