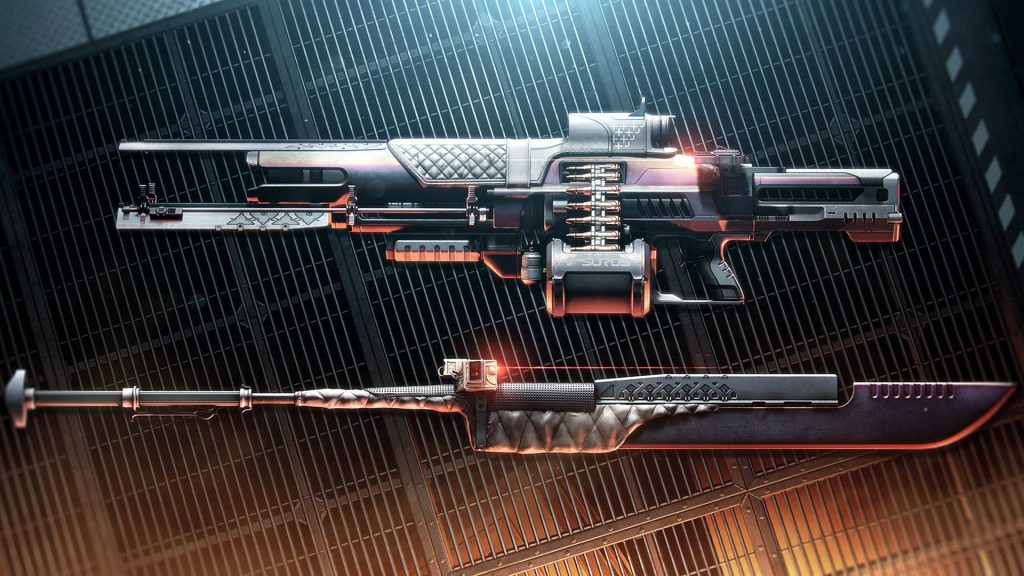 After the first few weeks of leveling, the Guardians in Destiny 2 have started creating the first meta builds of Season 19. There are some new perks and new weapons available to them, such as the Kelgorath Judgment Glaive. With this powerful tool and a new perk, a keeper has now created a mega build that makes every boss tremble.

What build is this? The newly discovered build is a solar setup for titans. The YouTuber Plunderthabooty developed it, combining his burning abilities, which give him high damage resistance, with the Season 19 glaive “Judgment of Kelgorath”.

The solar glaive “Judgment of Kelgorath” is new in Season 19 and can drop with the also new perk “Close to melee”.

Especially with glaives, the option with fast melee attacks has already proven to be very effective at the start of “The Witch Queen”. Small and powerful enemies were sliced ​​away in seconds. But the new glaive from Season 19 perfects this many times over with a few additional ability buffs and now also lets bosses melt away.

MeinMMO shows you what else you need in addition to the glaive with the new perk, so that you too get an indestructible titan that simply pokes away any opponent.

What do I need for the build? First of all, you need a Solar Titan. You then get him the new glaive of Season 19 “Judgment of Kelgorath” with the perk “Close to melee”.

What is a “glaive” anyway? The glaive is a new weapon class in Destiny 2 introduced with the current expansion, The Witch Queen. It is the only weapon that combines 4 combat options: projectile weapon, sword, shield and spear. Additionally, the glaive has changed the way Destiny 2 is played by blending attack and defense.
– You can aim a projectile at your opponents from afar.
– Quick melee attacks can slice and dice small and powerful enemies in seconds.
– The shield can be used to block almost anything, even annoying shots from snipers.
– The combination of blocking and melee attack feels particularly strong.

Normally, Keepers would have to hope for luck for the perfect roll. But things have changed since the introduction of weapon crafting in Destiny 2. You now just need luck to get this weapon’s blueprint 5x – no longer the right perks. After that you can build the glaive in the armory of the Enclave on Mars as you need it.

Your Titan Solar abilities will do the rest. These give the necessary heal when you are so close to the enemies.

How to play the build? Playing requires some practice and trying to sustain your Titan’s Radiant buff while getting kills with the melee and glaive projectiles.

The first step is to deal a projectile kill with your legendary Solar Glaive. The perk “Close to melee” directly increases glaive melee damage by 30%.

Glaive projectiles or Glaive melee damage will now extend the duration of this damage buff. In combination with the Titan’s solar abilities, i.e. its aspects and fragments, you can then also increase the total damage with the solar glaive to an incredible level. This works through Radiant because it increases damage further. So you always have between 8 and 12 seconds after a kill to stay “radiant”.

If you then also use the tractor cannon, you pack another 30% on top. However, there is also the option for another player to equip this weapon if you are on a team.

This is your life insurance in the build: Restoration serves as your solid life insurance. It is triggered by sunspots and can also be extended by solar weapons or ability kills. If it gets tight, the healing grenade saves you last, you just have to throw it in front of your feet.

If you manage to stack the buffs to the optimum, it’s no longer a problem to land a whopping 82,000 damage per glaive hit. With this damage output, almost every boss with 3 to 4 hits is completely destroyed.

Our recommendation: Be sure to try it. Such a high damage output could end up on Bungie’s balancing list pretty quickly.

What do you think of the build? Does that sound interesting to try? Or are you not the glaive player and prefer to rely on other weapons. You are also welcome to tell us in the comments what your top build of Season 19 is right now.

In the coming year 2023, a household name will leave the Destiny 2 community and head for new shores. Here’s how players said goodbye to dmg04, Bungie’s Senior Community Manager: