Escape From Tarkov goes dungeon crawling in Dark And Darker 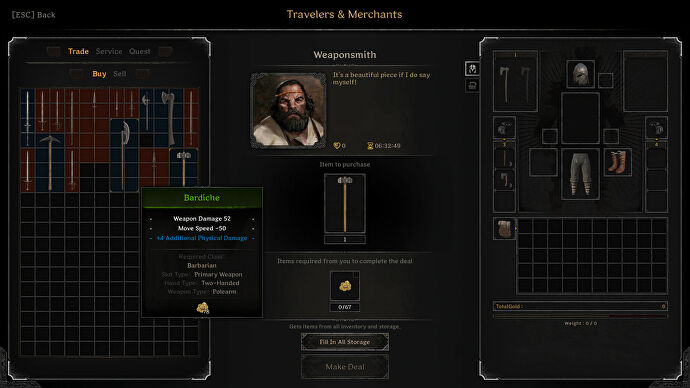 The skeleton-smashing and lock-picking action of first-person dungeon-crawlers combines with the PvPvE tension of Escape From Tarkov in Dark And Darker, which currently has a free alpha playtest running. Alone or with a party of pals, you head into dungeons to mash AI-controlled monsters and fill your pockets with loot. Other players are out there doing the same, and might come to claim your goodies, especially as you’re all competing for the limited escape portals that let you keep your shinies. It’s an interesting one, and doing well on both Steam and Twitch.

So, pick from your usual dungeon-crawling classes (Fighter, Barbarian, Rogue, Ranger, Wizard, and Cleric, each doing what you’d expect from a fantasy dungeon-crawler), and set out to dungeon-crawl in the traditional dungeon -crawling way. Swing swords, throw knives, cast spells, pling arrows, use abilities, loot corpses, dodge environmental traps, pick locks, chug potions, open chests, and grab new swords and hats and shoes and such. The combat did not feel interesting or good to me, but this is still relatively early in development. And you can bring your pals, which is nice. You really want to need your pals.

While you’re fighting monsters and nabbing loot, other players are doing the same in the same dungeon. You might bump into them. They certainly might attempt to murder you. Murder you then steal your stuff. It’s a shame that it doesn’t have voice chat at the moment, because the ability to stress that “no no genuinely I’m friendly I swear I won’t murder you” greatly expands the social possibilities—and makes betrayals all the more sweet. Either way, players are slowly pushed closer together by a battle royale-style shrinking circle of death.

See also  WoW Dragonflight: Villains! This is how Blizzard improves your talent trees

Dark And Darker does have persistent progression to level up and unlock perks and bit, but loot is disposable. If you die, you lose everything you’re carrying. To use it in a future fight, you need to reach the limited escape portals. One type sends you home, the other sends you deeper into the dungeon for greater risks and greater rewards.

It’s that Tarkov proposition: take good loot into battle and you’re more likely to succeed and come home with more good loot, but if you die, your death will hurt even more. Having escaped the grind of Destiny 2, I have absolutely no interest in grinding for disposable loot, but I do appreciate the idea of ​​it. It’s a good tension to bring to a game, for people who are not me.

To join Dark And Darker’s free alpha playtest, head on over to Steam and click the big green “Request Access” button. I received access instantly, so it seems the alpha is pretty open.

Dark And Darker’s full launch is still a year away, expected at the end of 2023, and it shows. The devs clearly still have a lot to tune and finalize and rework. This is to be expected because it’s a free alpha test. While I haven’t enjoyed the little I’ve played, I must say Tarkov ’em ups are very much not my genre, and the potential is interesting. It is a game whose risks, dramas, and disappointments I can see making for fun Twitch viewing, y’know?

As I write, Dark And Darker sits at number 32 on Steam’s concurrent playercount chart, between Dead By Daylight and Don’t Starve Together. Respectable cooperative company.

See also  CoD Modern Warfare 2 and Warzone 2.0 – Everything about the preload and date